In mathematics, differential calculus is a subfield of calculus concerned with the study of the rates at which quantities change. It is one of the two traditional divisions of calculus, the other being integral calculus.

Differential calculus and integral calculus are connected by the fundamental theorem of calculus, which states that differentiation is the reverse process to integration.

Derivatives are frequently used to find the maxima and minima of a function. Equations involving derivatives are called differential equations and are fundamental in describing natural phenomena. Derivatives and their generalizations appear in many fields of mathematics, such as complex analysis, functional analysis, differential geometry, measure theory and abstract algebra.

Suppose that x and y are real numbers and that y is a function of x, that is, for every value of x, there is a corresponding value of y. This relationship is written as y = f(x). If f(x) is the equation for a straight line, then there are two real numbers m and b such that y = m x + b. m is called the slope and can be determined from the formula:

where the symbol Δ (the uppercase form of the Greek letter Delta) is an abbreviation for "change in". It follows that Δy = m Δx.

A closely related notion is the differential of a function. 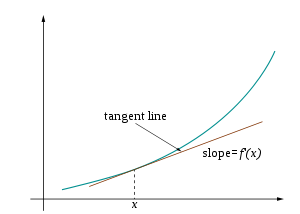 When x and y are real variables, the derivative of f at x is the slope of the tangent line to the graph of f at x. Because the source and target of f are one-dimensional, the derivative of f is a real number. If x and y are vectors, then the best linear approximation to the graph of f depends on how f changes in several directions at once. Taking the best linear approximation in a single direction determines a partial derivative, which is usually denoted ∂y/∂x. The linearization of f in all directions at once is called the total derivative.

The concept of a derivative in the sense of a tangent line is a very old one, familiar to Greek geometers such as Euclid (c. 300 BC), Archimedes (c. 287–212 BC) and Apollonius of Perga (c. 262–190 BC).[1] Archimedes also introduced the use of infinitesimals, although these were primarily used to study areas and volumes rather than derivatives and tangents; see Archimedes' use of infinitesimals.

The use of infinitesimals to study rates of change can be found in Indian mathematics, perhaps as early as 500 AD, when the astronomer and mathematician Aryabhata (476–550) used infinitesimals to study the motion of the moon.[2] The use of infinitesimals to compute rates of change was developed significantly by Bhāskara II (1114–1185); indeed, it has been argued[3] that many of the key notions of differential calculus can be found in his work, such as "Rolle's theorem".[4] The Persian mathematician, Sharaf al-Dīn al-Tūsī (1135–1213), was the first to discover the derivative of cubic polynomials, an important result in differential calculus;[5] his Treatise on Equations developed concepts related to differential calculus, such as the derivative function and the maxima and minima of curves, in order to solve cubic equations which may not have positive solutions.[6]

The modern development of calculus is usually credited to Isaac Newton (1643–1727) and Gottfried Leibniz (1646–1716), who provided independent[7] and unified approaches to differentiation and derivatives. The key insight, however, that earned them this credit, was the fundamental theorem of calculus relating differentiation and integration: this rendered obsolete most previous methods for computing areas and volumes,[8] which had not been significantly extended since the time of Ibn al-Haytham (Alhazen).[9] For their ideas on derivatives, both Newton and Leibniz built on significant earlier work by mathematicians such as Isaac Barrow (1630–1677), René Descartes (1596–1650), Christiaan Huygens (1629–1695), Blaise Pascal (1623–1662) and John Wallis (1616–1703). Isaac Barrow is generally given credit for the early development of the derivative.[10] Nevertheless, Newton and Leibniz remain key figures in the history of differentiation, not least because Newton was the first to apply differentiation to theoretical physics, while Leibniz systematically developed much of the notation still used today.

Since the 17th century many mathematicians have contributed to the theory of differentiation. In the 19th century, calculus was put on a much more rigorous footing by mathematicians such as Augustin Louis Cauchy (1789–1857), Bernhard Riemann (1826–1866), and Karl Weierstrass (1815–1897). It was also during this period that the differentiation was generalized to Euclidean space and the complex plane.

Taking derivatives and solving for critical points is therefore often a simple way to find local minima or maxima, which can be useful in optimization. By the extreme value theorem, a continuous function on a closed interval must attain its minimum and maximum values at least once. If the function is differentiable, the minima and maxima can only occur at critical points or endpoints.

This also has applications in graph sketching: once the local minima and maxima of a differentiable function have been found, a rough plot of the graph can be obtained from the observation that it will be either increasing or decreasing between critical points.

One example of an optimization problem is: Find the shortest curve between two points on a surface, assuming that the curve must also lie on the surface. If the surface is a plane, then the shortest curve is a line. But if the surface is, for example, egg-shaped, then the shortest path is not immediately clear. These paths are called geodesics, and one of the simplest problems in the calculus of variations is finding geodesics. Another example is: Find the smallest area surface filling in a closed curve in space. This surface is called a minimal surface and it, too, can be found using the calculus of variations.

Calculus is of vital importance in physics: many physical processes are described by equations involving derivatives, called differential equations. Physics is particularly concerned with the way quantities change and evolve over time, and the concept of the "time derivative" — the rate of change over time — is essential for the precise definition of several important concepts. In particular, the time derivatives of an object's position are significant in Newtonian physics:

For example, if an object's position on a line is given by

then the object's velocity is

and the object's acceleration is

The heat equation in one space variable, which describes how heat diffuses through a straight rod, is the partial differential equation

Here u(x,t) is the temperature of the rod at position x and time t and α is a constant that depends on how fast heat diffuses through the rod.

The mean value theorem gives a relationship between values of the derivative and values of the original function. If f(x) is a real-valued function and a and b are numbers with a < b, then the mean value theorem says that under mild hypotheses, the slope between the two points (a,f(a)) and (b,f(b)) is equal to the slope of the tangent line to f at some point c between a and b. In other words,

In practice, what the mean value theorem does is control a function in terms of its derivative. For instance, suppose that f has derivative equal to zero at each point. This means that its tangent line is horizontal at every point, so the function should also be horizontal. The mean value theorem proves that this must be true: The slope between any two points on the graph of f must equal the slope of one of the tangent lines of f. All of those slopes are zero, so any line from one point on the graph to another point will also have slope zero. But that says that the function does not move up or down, so it must be a horizontal line. More complicated conditions on the derivative lead to less precise but still highly useful information about the original function.

Some natural geometric shapes, such as circles, cannot be drawn as the graph of a function. For instance, if f(x,y) = x2 + y2 − 1, then the circle is the set of all pairs (x,y) such that f(x,y) = 0. This set is called the zero set of f. It is not the same as the graph of f, which is a cone. The implicit function theorem converts relations such as f(x,y) = 0 into functions. It states that if f is continuously differentiable, then around most points, the zero set of f looks like graphs of functions pasted together. The points where this is not true are determined by a condition on the derivative of f. The circle, for instance, can be pasted together from the graphs of the two functions