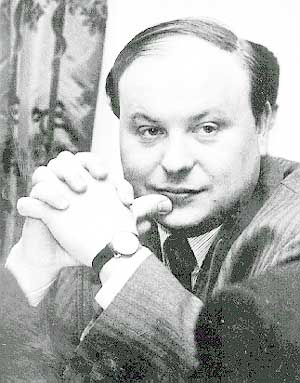 Yegor Timurovich Gaidar ( _ru. Его́р Тиму́рович Гайда́р; IPA-ru|jɪˈgor tʲɪˈmurəvʲɪtɕ gɐjˈdar) (born , ) is a Russian economist and politician, and was from to . He is the grandson of famous Soviet writers , on the side of his father, military correspondent Timur Gaidar, who fought in and was friend of . On his mother's side he is grandson of . His daughter, is a leader of the political youth movement "Yes!" in Russia.

Gaidar graduated with honors from the , Department of Economics, in 1978 and worked as a researcher in several academic institutes. A long-time member of the and an editor of the ideological journal "Communist" during the , he turned a liberal during the time of 's reforms. In 1991 he quit the Communist Party and joined Yeltsin's government.

While in government, Gaidar advocated liberal economic reforms according to the principle of shock therapy. His most well-known decision was to abolish price regulation by the state, which immediately resulted in a major increase of prices and amounted to officially authorizing a in Russia. He also cut military procurement and industrial subsidies, and reduced the budget deficit. Gaidar was the Minister of Economic Development from 1991 until 1992, and Minister of Finance from February 1992 until April 1992.

He was appointed Prime Minister under President in 1992 from until , when the anti-Yeltsin refused to confirm him in this position and instead chose . Gaidar was also the First Deputy Prime Minister from 1991 until 1992 and again from September 1993 until January 1994.

Later in 1994, after leaving the government, he became a founding member and chairman of the party. In 1999, he became a founding member and co-chairman, along with his longtime political ally of the . He served as a deputy of the from 1999 to 2003. In 2001 the Democratic Choice Party merged into the Union of Right Forces. After URF's failure to regain seats in the parliament in 2003, Gaidar gradually retired from public political activities, concentrating on research in economics.

In his book "Collapse of an Empire: Lessons for Modern Russia" he provided an analysis of the relationship between the energy prices and political events in Russia. He suggested that one of main reasons behind the 's fall was the low price of oil. Prices were also low during Yeltsin's rule, which was a serious problem that made political and economic reforms in the country very difficult. According to Gaidar, it is wrong to rely only on oil and gas, as it creates only a false impression of prosperity and stability in the country. He argued that a lot more must be done to promote real economic development.

On , , Yegor Gaidar was found unconscious in , where he had been presenting his new book "Lasting Time: Russia in the World". He was taken to a Dublin hospital but doctors said there was no serious threat to his health. There have been suspicions of a poisoning but Gaidar and his close ally have refrained from accusing the Russian Security Service. [ [http://www.theaustralian.news.com.au/story/0,20867,20845077-2703,00.html Second Russian in poison mystery] , , ] On , Gaidar did claim in an op-ed published in both Russian-language and English-language publications, that he was poisoned by adversaries of the Russian authorities. He did not elaborate on who these adversaries may be.Fact|date=November 2007 He repeated his claim on the programme . [Shown on 19 February 2008]

At a talk show with on June 17, 2007, Gaidar predicted a probable sequence of future political events in Russia based on his personal sources and expertise. In response to one-sided recognition of by Western powers, Russia will recognize independence of and . This will lead to a military conflict of Russia and Georgia, urgent changes in Russian Constitution, and remaining in his presidential position for a long time [http://www.echo.msk.ru/programs/albac/] .