The Sea Cadet Corps (SCC) is a UK national youth organisation sponsored by the Royal Navy and open to young people between the ages of 10-18 years old. The SCC is the UK's largest Naval Cadet Force with over 30,000 cadets and adult volunteers. Although not a pre-service organisation, the Sea Cadets follow the rate/rank structure, traditions, values and ethos of their parent service, the Royal Navy and for Marine Cadet Section the Royal Marines.

Unlike the other cadet forces (Army Cadet Force, Air Training Corps and Combined Cadet Force), the SCC receives minimal funding from the MOD. It is an independent charity and is owned and governed by the Marine Society and Sea Cadets (MSSC), meaning it has greater independence and control than its sister organisations.

Whilst the SCC is not a pre-service organisation, a significant minority of former Sea Cadets and Marine Cadets do go on to join the Royal Navy, Royal Marines or other sections of the Armed Forces. 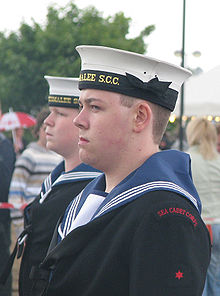 A Sea Cadet in No.1 Uniform

The Marine Society & Sea Cadets[1] is the SCC's parent organisation and operates from its Headquarters (MSSCHQ) at 202 Lambeth Road, London. The MSSC, as well as governing the Sea Cadet also runs the College of the Sea.

The Captain of the Sea Cadet Corps (CSC) and Director of Operations is a serving or retired Royal Navy officer appointed to the Sea Cadets for a given period (usually three years) to oversee the running of the Sea Cadet Corps and to act as its figurehead. Prior to 2007, the CSC stood for Commodore Sea Cadets, but following the departure of Commodore Laurie Brokenshire (RN) (Rtd.) in 2007, and the appointment of a captain, CSC now stands for Captain Sea Cadets.

The current CSC is Captain Jonathan Fry RN. Captain Fry joined the corps in May 2007, however as of 20th July 2009, he is being reassigned to MoD's Support Headquarters in Bristol as leader of the RN Team responsible for the building of RN Frigates. His role will be taken over by Captain Mark Windsor (RN).

MSSCHQ is made up of a variety of different sections, including:

The country is divided into six areas which are:

Each area has an Area Officer (AO) who is a serving Royal Navy Commander or, occasionally, a Royal Marine Lieutenant Colonel and based in area offices.

In addition to the AO each area also has:

Each unit or Training Ship (T.S.) is commanded by a Commanding Officer (CO), with help from a 1st Lieutentant. Some units have Marine Cadet Detachments. 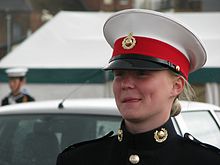 The main differences between the ACF and RMC are:

Neither cadets or adult staff wear Commando Berets, unless they have done the course. RMC staff who are former Royal Marines Commandos or servicemen who have passed the AACC may wear the green beret (and Lympstone do check). Also it is not uncommon to see serving marines wearing their green beret helping out with RMC activities.

The operational head of the RMC is the Staff Royal Marines Officer (SRMO), who is typically a serving Royal Marines Colour Sergeant on secondment to the SCC. He is responsible for overseeing the running of the RMC and reporting to the CSC. He is also responsible for conducting the annual SRMO field assessment which all detachments must participate in. The current SRMO is C/Sgt Mark Allen.

The SRMO is assisted by the Regimental Sergeant Major, who is the most senior Marine Cadet NCO in the corps. The current RSM is WO1(SCC) Robinson (RMR) and is also the Marine Cadet Development Officer (MCDO).

In addition there is a Colonel Royal Marine Cadets, who is a figurehead for the Corps. However, he is purely a figurehead.

Companies cover the same area as the Sea Cadet "Area", and each is identified by a phonetic letter.

Each company has a Company Commander, usually a Major(SCC) (RMR), who was formerly considered an ASO for Marines. The role is now identified as Company Commaner. In addition, Coys include:

Since not every unit has a Marine Cadet Detachment, using District border would result in Troops with one detachment or none. As such, Troop borders, are independent and cross District boundries. There are several Troops in a Company, and are numbered 1 Troop, 2 Troop etc. Each troop has a Troop Officer/ Troop Commander and and Troop Sergeant Major / Troop Sergeant.

History of the Corps

The Sea Cadet Corps has one of the longest continuous histories of any youth organisation in the country. The Corps dates back to the Crimean War (1854-1856) when sailors returning home from the campaign formed Naval Lads' Brigades to help orphans in the back streets of sea ports.

The SCC in the UK can be traced back to the Kent port of Whitstable where the first of the Naval Lads' Brigades was established. The success of the brigades in helping disadvantaged youth led to the formation of the Navy League, a national organisation with a membership of 250,000 dedicated to supporting the Royal Navy, which subsequently adopted the Brigades in 1910[2].

The joining age for Sea Cadets is between 10-18 years old[3] of all backgrounds. The SCC is an equal opportunities organisation, and take children from all walks of life. The cadets can be split into three distinct sections.

Sea Cadets are by far the biggest section. Their training is based around the traditions of the Royal Navy, and in the summer they spend a large amount of time on the water. The Sea Cadets is open to anyone aged 12-18.

Most Sea Cadet units also have a Junior Cadet section for the 10-12 year olds. Junior Cadets have their own training programme and uniform. It is based around a more practical and fun version of the Sea Cadet training programme, but designed for a younger audience. When Junior Sea Cadets turn 12, they may become Sea Cadets either permenantly or for 9 months until they reach the age necessary for the Marine Cadets.

One of the biggest strengths of the SCC is the breadth of activities it offers both onshore and offshore. Some training is compulsory, but most of it is optional. Cadets are encouraged to take part in as much as possible and to try new things.

Core training is the bread and butter of Sea Cadet training, and is directly linked to promotion/advancement.

For Sea Cadets it is called Part 1 training and involves key skills, and vital knowledge about Corps life, traditions of the Royal Navy, water safety, leadership, care of uniform, health and safety, as well as elements of first aid, seamanship, and swimming.

This is mirrored in the Marine Cadets' Phase Training, but also for Marines, fieldcraft, campcraft, map-reading, battle drills and weapons handling are included in Core training.

All the following are on offer to cadets, either at the unit or on District/Area/National Courses.

National courses are also held, often on Royal Navy bases and at minimal cost, to teach skills such as leadership and teamwork. Specialist qualification courses include power boating in Scotland, cooking in Preston and fire fighting in Cornwall.

The SCC owns and operates the tall ship TS Royalist, which is also the flagship of the Sea Cadet Corps. The SCC also owns a number of other training ships, such as TS John Jerwood, and two yachts[6].

There are competitions at vaying levels in many of the sports, proficiencies and specializations of the SCC. Competitions start at a District level and progress through to National level.

Staff are recruited from the age of 18 (though there is no upper age limit, those adults extending beyond 65 require special insurance arrangements). All adult staff members are subject to security and Criminal Records (CRB) checks. All substantive SCC staff are recognised by the MOD as being Cadet Forces Adult Volunteers (CFAVs). They can be either uniformed or non-uniformed. Officers, Senior Rates form the uniformed adult staff with Civilian Instructors and Unit Helpers being non-uniformed.

CIs give up their time to help out at the unit, either teaching or just helping out. They have no compulsory time committment, or obligation, but are still required to have a CRB. Some CIs are specialists in a field, others just lend an extra pair of hands. They are a vital part of the corps.

Officers are traditionally the commanders and organisers of a unit or event. Their job is to organise, prepare and oversee the running of the unit, as well as look after staff and ensure that safe procedures are in place for training. For promotion beyond Sub Lieutenant it is generally expected that an officer will hold/have held a executive role. Sea Cadet Officers wear the insignia of the former Royal Naval Volunteer Reserve (RNVR). Ranks range from Midshipman(SCC) RNR / 2nd Lieutenant(SCC) RMR to Commander(SCC)RNR/Lieutenant Colonel(SCC) RMR (as of 1st August 2009). Officers are permitted to use the Post-Nominals RNR or RMR "by Grave and Favour", although this is purely honorary as they have no reserve operational commitment.

Senior Rates / Senior Non-Commisisoned Officers are the Do-ers. Their job is to be with the cadets carrying out the training, looking after their welfare, maintaining control, discipline, and standards in accordance with the commanding officer's wishes. They are to ensure adequate supervison and safety precautions as organised by the Commanding Officer is in place. SRs/SNCOs also look after Drill.

Warrant Officers are a new addition to the corps as of 2008. While technically not Senior Rates or Officers, they are the most senior of of the Senior Rates, who have been promoted and also given a role at Area Level. Sea Cadet Senior Ratings may hold rates/ranks from Probationary Petty Officer(SCC)/Sergeant(SCC) through to Warrant Officer Class 1 (SCC) RNR/RMR.

Note: Marine Cadet Class 2 (MC2s) can be promoted to either MC1 or Cadet Lance Corporal. L/Cpl is higher than MC1 but not Able Cadet, and below Leading Cadet / Corporal. A L/Cpl is considered to be a Junior NCO (JNCO) and is expected to maintain a higher standard. An MC2 to become a L/Cpl if their pass the assessment board with a credit pass or at the wish of the Commanding Officer under advisement from the Detachment Commander.

United Kingdom Sea Cadets were strong supporters of Trafalgar 200 and participated in many activities. A key role was played by the Sea Cadet Corps training ship TS Royalist during Son et Lumiere and the re-enactment of the Battle of Trafalgar, led by the replica frigate Grand Turk which played the part of HMS Victory. TS Royalist cruised just off the Southsea beach along with several other Tall Ships during a sabre-rattling pre-battle display of power.