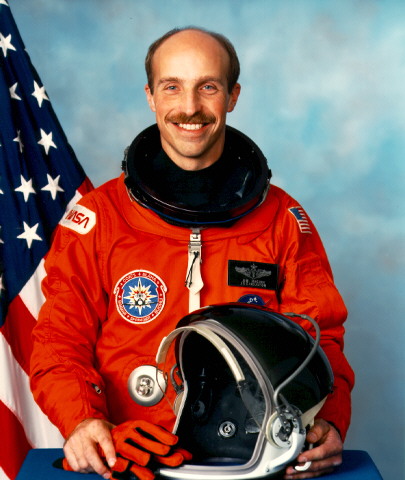 James Philipp Bagian ( _hy. Ջեյմս Ֆիլիպի Բաղյան), M.D., P.E. was a scientific born , , in . Married to the former Tandi M. Benson of . They have four children. He enjoys , backpacking, , , flying and sports, as well as and automobile rebuilding. He is an Armenian-American. His parents, Philip and Rose Bagian, reside in Philadelphia, Pennsylvania. Her parents, Boyd and Barbara Benson, reside in Seattle, Washington.

Graduated from Central High School in Philadelphia, Pennsylvania, in 1969; received a bachelor of science degree in from in 1973, and a doctorate in medicine from in 1977.

Bagian worked as a process engineer for the Company in , in 1973, and later as a mechanical engineer at the Air Test Center at , , from 1976 to 1978, and at the same time, pursued studies for his medical degree. Upon graduating from Thomas Jefferson University in 1977, Bagian completed one year of general surgery residency with the in . He subsequently went to work as a and medical officer at the in 1978, while concurrently completing studies at the and in . He was completing a residency in at the when notified of his selection by NASA for the astronaut candidate program. Bagian received his Professional Engineers Certification in 1986, and was board-certified in aerospace medicine by the in 1987. Since 1981, Bagian has been active in the community and has served as a member of the on . He has been a snow-and-ice rescue techniques instructor on during this period. Bagian is a in the and is the pararescue flight surgeon for the . He is a USAF-qualified freefall , holds a private pilot's license and has logged over 1,500 hours flying time in and , , and .

Bagian became a NASA astronaut in July 1980. He took part in both the planning and provision of emergency medical and rescue support for the first six Shuttle flights. He served as the Astronaut Office coordinator for Space Shuttle payload software and crew equipment, as well as supporting the development of a variety of payloads and participating in the verification of Space Shuttle flight software. In 1986, Bagian served as an investigator for the 51-L accident board. He was responsible for the development program and implementation of the pressure suit used for crew escape and various other crew survival equipment to be used on future Shuttle missions, and is in charge of Shuttle search and rescue planning and implementation for the Astronaut Office. Bagian was a member of the NASA Headquarters Research Animal Holding Facility Review Board. He has authored numerous scientific papers in the fields of human factors, environmental and aerospace medicine. A veteran of two space flights ( in 1989 and in 1991), Bagian has logged over 337 hours in space.

Bagian first flew on the crew of STS-29, which launched from , , aboard the Orbiter "Discovery", on , 1989. During this highly successful five-day mission, the crew deployed a Tracking and Data Relay Satellite and performed numerous secondary experiments, including a Space Station -heat pipe" radiator experiment, two student experiments, a protein crystal growth experiment, and a chromosome and plant cell division experiment. Bagian was the principal investigator and performed Detailed Supplementary Objective 470 which described, by the use of transcranial Doppler, the changes of cerebral blood flow and its relationship to (SAS) and (SMS). Bagian was the first person to treat SMS with the drug by intramuscular injection. This represented the first successful treatment regimen for SMS and has now been adopted by NASA as the standard of care for the control of SMS in Shuttle crews and is routinely used. In addition, the crew took over 3,000 photographs of the Earth using several types of cameras, including the 70 mm movie camera. Mission duration was 80 orbits and concluded with a landing at , , on , 1989. With the completion of this mission, he logged over 119 hours in space.

Bagian served on the crew of STS-40 Life Sciences (), the first dedicated space and life sciences mission, which launched from the Kennedy Space Center, Florida, on , 1991. SLS-1 was a nine-day mission during which crew members performed experiments which explored how the heart, blood vessels, lungs, kidneys, and hormone-secreting glands respond to microgravity, the causes of space sickness, and changes in muscles, bones, and cells which occur in humans during space flight. Other payloads included experiments designed to investigate materials science, plant biology and cosmic radiation. In addition to the scheduled payload activities on STS-40, Bagian was successful in personally devising and implementing repair procedures for malfunctioning experiment hardware which allowed all scheduled scientific objectives to be successfully accomplished. Following 146 orbits of the Earth, "Columbia" and her crew landed at Edwards Air Force Base, California, on , 1991. Completion of this flight logged him an additional 218 hours in space.

Bagian took a leave of absence from NASA. He is currently involved in both the practice of and , at the Department of Veterans Affairs. Bagian is the Veterans Health Administration (VHA) Chief Patient Safety Officer, and Director of the VA National Center for Patient Safety.