Sara Coleridge (23 December 1802 – 3 May 1852) was an English author and translator. She was the fourth child and only daughter of Samuel Taylor Coleridge and his wife Sarah Fricker.

Coleridge was born at Greta Hall, Keswick. Here, after 1803, the Coleridges, Robert Southey and his wife (Mrs. Coleridge's sister), and Mrs. Lovell (another sister), widow of Robert Lovell, the Quaker poet, all lived together; but Coleridge was often away from home; and Uncle Southey was a paterfamilias. The Wordsworths at Grasmere were their neighbors. 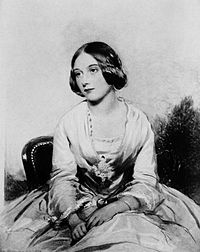 Wordsworth, in his poem, the Triad, has left us a description, or poetical glorification, as Sara Coleridge calls it, of the three girls: his own daughter Dora, Edith Southey and Sara Coleridge, the last of the three, though eldest born. Greta Hall was Sara Coleridge's home until her marriage; and the little Lake colony seems to have been her only school. Guided by Southey, and with his ample library at her command, she read by herself the chief Greek and Latin classics, and before she was twenty five had learnt in addition French, German, Italian and Spanish. 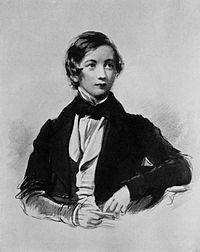 In 1822, Sara Coleridge published Account of the Abipones, a translation in three large volumes of Martin Dobrizhoffer, undertaken in connexion with Southey's Tale of Paraguay, which had been suggested to him by Dobrizhoffer's volumes; and Southey alludes to his niece, the translator (canto, iii, stanza 16), where he speaks of the pleasure the old missionary would have felt if "…he could in Merlin's glass have seen/By whom his tomes to speak our tongue were taught."

In less grandiloquent terms, Charles Lamb, writing about the Tale of Paraguay to Southey in 1825, says, "How she Dobrizhoffered it all out, puzzles my slender Latinity to conjecture." In 1825 her second work appeared, a translation from the medieval French of the Loyal Serviteur, The Right Joyous and Pleasant History of the Feats, Jests, and Prowesses of the Chevalier Bayard, the Good Knight without Fear and without Reproach: By the Loyal Servant.

In September 1829, at Crosthwaite Church, Keswick, after an engagement of seven years duration, Sara Coleridge was married to her cousin, Henry Nelson Coleridge (1798–1843), younger son of Captain James Coleridge. He was then a chancery barrister in London.

The first eight years of her married life were spent in a little cottage in Hampstead. There four of her children were born, of whom two survived. In 1834 Mrs. Coleridge published her Pretty Lessons in Verse for Good Children; with some Lessons in Latin in Easy Rhyme. These were originally written for the instruction of her own children, and became very popular.

In 1837 the Coleridges moved to Chester Place, Regents Park; and in the same year appeared Phantasmion, a Fairy Tale, Sara Coleridge's longest original work, described by critic Mike Ashley as "the first fairytale novel written in English".[1] Historian of literature Dennis Butts describes Phantasmion as a "remarkable pioneering fantasy" and "an extraordinary momument to her talent". [2] The songs in Phantasmion were much admired at the time by Leigh Hunt and other critics. Some of them, such as Sylvan Stay and One Face Alone, are extremely graceful and musical, and the whole fairy tale is noticeable for the beauty of the story and the richness of its language. Some historians of the fantasy genre believe Phantasmion may have influenced the work of George MacDonald.[2]

In 1843 Henry Coleridge died, leaving to his widow the unfinished task of editing her father's works. To these she added some compositions of her own, among which are the Essay on Rationalism, with a special application to the Doctrine of Baptismal Regeneration, appended to Coleridge's Aids to Reflection, a Preface to the Essays on his Own Times, by S. T. Coleridge, and the Introduction to the Biographia Literaria.

During the last few years of her life Sara Coleridge was a confirmed invalid. Shortly before she died she amused herself by writing a little autobiography for her daughter. This, which reaches only to her ninth year, was completed by her daughter, and published in 1873, together with some of her letters, under the title Memoirs and Letters of Sara Coleridge. The letters show a cultured and highly speculative mind. They contain many apt criticisms of known people and books, and are specially interesting for their allusions to Wordsworth and the Lake Poets. Sara Coleridge died in London on 3 May 1852.

Her son, Herbert Coleridge (1830–1861), won a double first class in classics and mathematics at Oxford in 1852. He was secretary to a committee appointed by the Philological Society to consider the project of a standard English dictionary, a scheme of which the New English Dictionary, published by the Clarendon Press, was the ultimate outcome. His personal researches into the subject were contained in his Glossarial Index to the Printed English Literature of the Thirteenth Century (1859).