Climbing
This article is about Human climbing. For climbing in other animals, see Arboreal locomotion. For other uses, see Climbing (disambiguation). 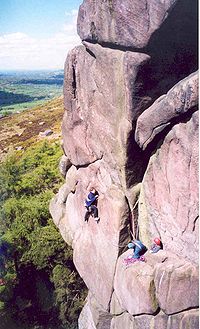 Rock climbers on Valkyrie at The Roaches in Staffordshire, England. 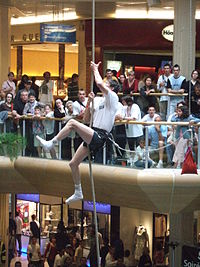 A competitor in a rope climbing event, at Lyon's Part-Dieu shopping centre. 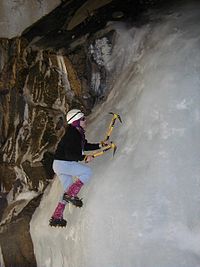 Climbing is the activity of using one's hands and feet (or indeed any other part of the body) to ascend a steep object. It is done both for recreation (to reach an inaccessible place, or for its own enjoyment) and professionally, as part of activities such as maintenance of a structure, or military operations.

Rock, ice and tree climbing all usually use ropes for safety or aid. Pole climbing and rope climbing were among the first exercises to be included in the origins of modern gymnastics in the late 18th century and early 19th century.