Oral Fixation Tour (known as Tour Fijación Oral in hispanophone countries) is the concert tour by Colombian singer-songwriter, Shakira, in support of her fourth and fifth studio albums, Fijación Oral Vol. 1 and Oral Fixation Vol. 2. The tour was the 15th most successful tour of 2006 grossing over $38 million dollars, although this figure does not include the gross for 2007 during which 44 shows from the tour took place. The total tour grossed over $100 million dollars. It's her largest and most extensive tour to date.[1][2] 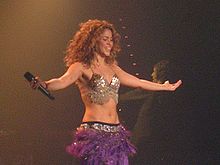 The tour began its first European leg on June 14, 2006 in Zaragoza, Spain, moving through 10 more cities in Spain, as well as featuring stops in Croatia, Romania and Greece.

The North American leg of the tour commenced August 9, 2006 at the Don Haskins Center in El Paso, Texas and moved across the United States, with a stop in Toronto, Canada.

On September 30, 2006 the tour began its Latin American leg in Mexico City with 8 sold out concerts at the Palacio de los Deportes, and swept through Guatemala, El Salvador, Panama, Venezuela, Colombia, Chile, Argentina, Peru, Ecuador, Puerto Rico and ended in Santo Domingo, Dominican Republic. Before ending the Latin American leg, Shakira returned to Miami in early December for 3 concerts at the American Airlines Arena, where the DVD footage of the concert was filmed.

On February 3, 2007, just a day after her 30th birthday, Shakira was scheduled to appear in the Netherlands. While a full stadium - 39,000 people - were waiting for Shakira, her official management announced that the show had to be rescheduled to March 17, 2007. Shakira was ill and had been advised to rest her voice. Shakira gave her manager the following letter to pass out to the crowd:

"I am very sad I cannot perform tonight. Holland is one of my favorite places on earth and I have been looking forward to doing this show for a long time. I promise I will make it up to you when I come back in March to give you the concert that the Dutch people deserve. Thanks for your understanding. All my love, Shakira."

Next day, Shakira's management cancelled the shows in Germany on February 5 and February 6, 2007, rescheduling them for dates in March and April, which she was able to keep.

After recovering from bronchitis and performing at the 2007 Grammy Awards, Shakira continued the tour from Paris on February 16, 2007 with no further cancellations to date.

At the February 19, 2007 show in Munich, Germany, a live webcam at the arena allowed the fans to watch the show for free from home.

A tour stop in Dubai took place on March 23, 2007. It was her first performance in the Middle East.

Shakira also played in Mumbai, India, on March 25, 2007. Around 20,000 people attended the concert. It was one of the biggest concerts in India by an international artist.

In May 2007, Shakira returned to Mexico again and kicked off her final leg of the tour with a handful of concerts in Mexico. 60,000 fans attended the May 13 concert in Mexico City, including Mexican president Felipe Calderón, who attended with his wife and daughter. It was Shakira's ninth show in Mexico City this tour. Shakira then toured Mexico, visiting many cities. A tenth date was added for Mexico City, taking place on May 27, where Shakira performed in Mexico City's Zocalo. The concert was the only FREE concert of the tour. Shakira broke the record with her concert on May 27; 210,000 fans showed up to see her making it the biggest concert ever by a national and international artist in México. The previous record was held by Mexican rock group Café Tacuba.

Shakira performing during the recording in Miami.

Mexico City was the city that got the most dates of the tour with 10 dates, and Miami was the second, with 5 dates. The Oral Fixation Tour 2006-2007 formally ended in Mexico in the city of Monterrey on May 30. All the shows in the second Mexican leg was sponsored by SEAT with "Las de la Intuición" (although SEAT sponsored one last show in Istanbul, Turkey.)

By the end of the tour, over 2 million spectators attended the Oral Fixation Tour.

On this concert Shakira had Alejandro Sanz as a guest and they performed together their 2005 smash hit La Tortura. Wyclef Jean was also a guest and performed the 2006 world wide hit Hips Don't Lie with Shakira. Shakira shows off her abilities as a musician playing the guitar during "Don't Bother" and "Inevitable", as well as the harmonica during "Te Dejo Madrid". The wardrobe Shakira wore on the concert was designed by Shakira and the prestigious designer Roberto Cavalli. The stage was designed by Shakira and Spanish visual artist Jaume de Laiguana. The Blu-ray edition was released December 12, 2007. The audio was recorded and mixed in stereo and 5.1 by Gustavo Celis. The live album quickly shot up the Mexican charts, peaking at number 1 for two non-consecutive weeks, and remained in the top 10 for over 11 weeks. Contrary to "Live & Off the Record", which was successful in Australia, certifying Gold, this release has not been promoted and has yet to chart there. 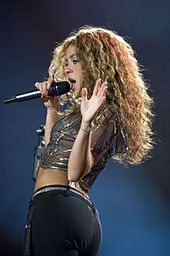 Shakira performing Hey You in 2007.