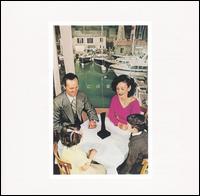 "Presence" is the seventh studio album by English rock band , released by on , . The album was written and recorded during a tumultuous time in the band's history, as was recuperating from serious injuries sustained in a car accident. Although the album received positive reviews from critics, it is one of the lowest sellers in the band's catalogue.

This album was conceived after singer sustained serious injuries from a on the Greek island of on , , which forced the band to cancel a proposed world tour due to commence on August 23, 1975.

I was lying there in some pain trying to get cockroaches off the bed and the guy next to me, this drunken soldier, started singing "The Ocean" from "". ["Light & Shade" Cameron Crowe, Led Zeppelin Boxed Set liner notes]

During a convalescent period on the Channel Island of and in , Plant wrote some lyrics, and when guitarist joined him at Malibu, these compositions were fleshed out. The two prepared enough material for rehearsals to begin at 's SIR Studio, where drummer and bass player John Paul Jones joined them. After a month of rehearsals, the album was recorded in just eighteen days

In an interview he gave to "" magazine in 1998, Page stated that he worked an average of 18 to 20 hours a day during the mixing period at Musicland Studios:

[A] fter the band finished recording all its parts, me and the engineer, , just started mixing until we would fall asleep. Then whoever would wake up first would call the other and we'd go back in and continue to work until we passed out again. [Brad Tolinski and Greg Di Bendetto, "Light and Shade", "Guitar World", January 1998.]

The album was completed on November 27, 1975. This was the day before , and in a telephone call to , Page suggested the album be named "Thanksgiving".

Most of the album consists solely of Page and Plant compositions. This can be explained by the fact that most of the songs were formulated at Malibu, where Page (but not Bonham and Jones) had joined a recuperating Plant.

Both Page and Plant had planned this album's recording session as a return to hard rock, much like their debut album, except at a new level of complexity. It marked a change in the Led Zeppelin sound towards more straightforward, guitar-based jams. Whereas their previous albums contain electric hard rock anthems balanced with acoustic ballads and intricate arrangements, "Presence" was seen to include more simplified riffs, and is Led Zeppelin's only studio album that features neither acoustic tracks nor keyboards (almost buried in the mix, a lone acoustic guitar can be heard on "").

The changed stylistic emphasis on this album was a direct result of the troubled circumstances experienced by the band around the time of its recording. As Page said at the time:

I think it was just a reflection of the total anxiety and emotion of that period. There's a hell of a lot of spontaneity about that album. We went in with virtually nothing and everything just came pouring out.

It was really like a cry of survival. There won't be another album like it, put it like that. It was a cry from the depths, the only thing that we could do.

In contrast to earlier albums which contained several tracks played live at , only two tracks from "Presence" were played in full on stage while the band was active. "" and "" were added to the setlist for the 1977 tour of the United States and stayed through the band's final concerts in 1980. Some of the guitar solo from "" was also incorporated into "" in these shows, but the actual song was never performed live until the tour of in , where it received three airings backed by an . "" was played in full by Led Zeppelin for the first time at the on December 10, 2007. The lack of live interpretations of the "Presence" material is perhaps understandable given that it would be a full year before they would return to the road.

The cover and inside sleeve of this album, created by , features various images of people interacting with a black -shaped object. Inside the album sleeve, the item is referred to simply as "The Object". It was intended to represent the "force and presence" of Led Zeppelin.

There was no working title for the album. The record-jacket designer said `When I think of the group, I always think of power and force. There's a definite presence there.' That was it. He wanted to call it `Obelisk'. To me, it was more important what was behind the obelisk. The cover is very tongue-in-cheek, to be quite honest. Sort of a joke on [the film] "". I think it's quite amusing.

The background used in the cover photograph is of an artificial marina that was installed inside 's Earl's Court Arena for the annual Earl's Court Boat Show that was held in the winter of 1974–1975. This was the same venue where the band played a series of concerts a few months after the boat show, in May 1975.

In 1977 the album was nominated for a in the category of best album package.

The album was released on , , having been delayed by the completion of the album sleeve.

The album's catalogue numbers were Swan Song SS 8416 in the U.S. and Swan Song SSK59402 in the UK, before being changed to 92439-2 for when the remastered version was released. However, this album has not been one of the band's biggest sellers. In late 1976 it was somewhat overshadowed by the release of the band's movie and soundtrack "The Song Remains the Same".

According to Dave Lewis, the album

has become a much underrated element of their catalogue. The basic drums-bass-guitars formula may lack the diversity of previous Zeppelin sets, but in terms of sheer energy, 'Presence' packs a considerable punch, and has emerged as one of their most potent performances ... This album is also a triumph for Jimmy Page. His production and dominant guitar style has an urgency and passion that reflects the troubled period that the group were going through at the time. 'Presence' is Led Zeppelin with their backs against the wall.

All songs written by and , except "Royal Orleans".