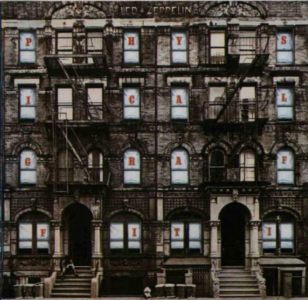 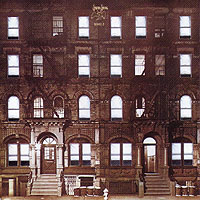 "Physical Graffiti" is the sixth album by the English band . It is a which was released on , 1975. Recording sessions for the album were initially disrupted when John Paul Jones considered leaving the band. After reuniting at , the band wrote and recorded eight songs, the combined length of which stretched the album beyond the typical length of an LP. This prompted the band to make "Physical Graffiti" a double album by including previously unreleased tracks from earlier recording sessions.

"Physical Graffiti" was commercially and critically successful; the album has sold 16 million copies in the alone and has come to be regarded as one of Led Zeppelin's defining works. RS500|70

The recording sessions for "Physical Graffiti" initially took place in November 1973 at in , . For these recordings, the band utilised . However, these sessions came to a halt quickly and the studio time was turned over to the band , who used it to record songs for their forthcoming album, "Straight Shooter".

It took a long time for this album mainly because when we originally went in to record it, John Paul Jones wasn't well and we had to cancel the time . . . everything got messed up. It took three months to sort the situation out.

However, according to Led Zeppelin author Dave Lewis,

it later emerged that Jones had wanted to quit the band and take up a position as choirmaster at . Peter Grant urged caution, suggesting that Jones was overwrought from the incessant touring and should take a rest from Zeppelin for a few weeks. Jones changed his mind and sessions resumed at Headley Grange after the Christmas holidays.

Once they had reconvened, the band recorded eight tracks at Headley Grange in January and February 1974, which were engineered by . Vocalist later referred to these eight tracks as "the belters":

We got eight tracks off ... and a lot of them were really raunchy. We did some real belters with live vocals, off-the-wall stuff that turned out really nice.

Similar to the sessions for the previous two albums, the decision to record at the informal surroundings of Headley Grange provided a welcome opportunity for the band to improvise and develop material along the way.

Some of the tracks we assembled in our own fashioned way of running through a track and realising before we knew it that we had stumbled on something completely different.

Because the eight tracks extended beyond the length of a conventional album, it was decided at some point to include several unreleased songs which had been recorded during the sessions for previous Led Zeppelin albums. The instrumental "Bron-Yr-Aur" was recorded in July 1970 at , , for "". "Night Flight" and "" were recorded at Headley Grange and "" at Island Studios, all for "". "The Rover" and "" were recorded at the same sessions as "" at using the in May 1972. "Houses of the Holy" was also recorded in May 1972, but at . The group's fifth album, "", took its title from this song despite the decision not to include the song on that album. Page explained:

We had more material than the required 40-odd minutes for one album. We had enough material for one and a half LPs, so we figured let's put out a double and use some of the material we had done previously but never released. It seemed like a good time to do that sort of thing, release tracks like "Boogie With Stu" which we normally wouldn't be able to do ... [T] his time we figured it was better to stretch out than to leave off.

According to engineer Nevison, the decision to expand the album to include songs from previous sessions was not part of the original planning:

I never knew that "Physical Graffiti" was going to be a double album. When we started out we were just cutting tracks for a new record. I left the project before they started pulling in songs from "Houses of the Holy" and getting them up to scratch. So I didn't know it was a double [album] until it came out.

Additional overdubs were added and the final mixing of the album was performed in October 1974 by at , . The title "Physical Graffiti" was coined by Page to illustrate the whole physical and written energy that had gone into producing the set.

In the opinion of Lewis, "Physical Graffiti"

was a massive outpouring of [Led] Zeppelin music that proved to be the definitive summary of their studio work ... Given the luxury of a double format, "Physical Graffiti" mirrors every facet of the Zeppelin repertoire. The end result is a finely balanced embarrassment of riches.

Several tracks off the album became live staples at . In particular, the songs "", "", "Kashmir", "" and"" became regular components of the band's live concert s following the release of the album.

Vocalist Robert Plant has stated that, of all the albums Led Zeppelin released, "Physical Graffiti" represented the band at its most creative and most expressive.

The album's sleeve design features a photograph of a tenement block, with interchanging window illustrations. The album designer, , was looking for a building that was symmetrical with interesting details, that was not obstructed by other objects and would fit the square album cover. He said:

We walked around the city for a few weeks looking for the right building. I had come up a concept for the band based on the tenement, people living there and moving in and out. The original album featured the building with the windows cut out on the cover and various sleeves that could be placed under the cover, filling the windows with the album title, track information or liner notes.

The two buildings photographed for the album cover are located at 96 and 98 in New York City.

The original album jacket for the LP included 4 covers made up of 2 inners (for each disc), a middle insert cover and an outer cover. The inner covers depict various objects and people (including photos of the band members in drag)

In 1976 the album was nominated for a in the category of best album package.

The album was released on , . It was the band's first release on their own label, which had been launched in May 1974. Until this point, all of Led Zeppelin's albums had been released on .

Upon its release, a review in "Rolling Stone" magazine referred to "Physical Graffiti" as Led Zeppelin's "bid for artistic respectability", adding that the only competition the band had for the title of 'World's Best Rock Band' were and .

Some cassette versions of the album place "Bron-Yr-Aur" immediately after "Kashmir", presumably to make each side of the cassette last approximately the same amount of time.

Credited to "Mrs. Valens, mother of Ritchie Valens". According to Jimmy Page, since the jam leaned heavily on "Ooh My Head" by the late Ritchie Valens, it was decided to give credit to his mother "because we heard she never received any royalties from any of her son's hits, and Robert did lean on that lyric a bit. So what happens? They tried to sue us for all of the song! We had to say bugger off". [ [http://www.turnmeondeadman.net/Zep/BoogieWithStu.html Led Zeppelin's Influences - Turn Me On, Dead Man ] ]