846 Naval Air Squadron is a squadron of the Royal Navy Fleet Air Arm. It operates the Westland Sea King HC4 helicopter and provides troop transport and load lifting support to 3 Commando Brigade Royal Marines. The squadron is based at RNAS Yeovilton in Somerset. 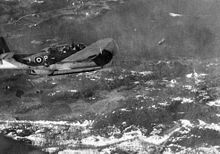 846 Naval Air Squadron was established in April 1943 at the Naval Air Station Quonset Point, Rhode Island, USA. It was equipped with 12 Grumman Avenger I torpedo bombers. Two months later the squadron embarked on the escort carrier HMS Ravager (D70) and was transferred to the UK. Before being assigned to HMS Tracker (D24) in January 1944, four Grumman Wildcat V fighters were added to 846 NAS. HMS Tracker was first assigned to convoys going to Gibraltar, then to Murmansk. On the latter voyage, aircraft from 846 NAS attacked eight German U-Boats.

When HMS Tracker was damaged in June 1944 while being part of the naval screen for the D-Day landings, she collided with the Canadian frigate HMCS Teme (K458), the squadron disembarked at RAF Limavady airfield, Northern Ireland, joining 15 Group RAF Coastal Command. A month later 846 NAS was assigned to HMS Trumpeter (D09), mainly laying mines off Norway until September 1944. In December a detachment was formed and transferred to HMS Premier (D23) for a few days. The remainder of 846 NAS operated from HMS Trumpeter or RNAS Hatston in Orkney up to May 1945. The fighter flight was disbanded after the end of hostilities in Europe.

846 NAS was then assigned to the 4th Carrier Group and should deploy to the Far East aboard the fleet carrier HMS Illustrious (87). However, a change of plans led to the squadron becoming a trials unit. It was renumbered 751 NAS and was disbanded at Machrihanish, in September 1945.[2]

846 NAS was reformed in 1962 as a Commando squadron equipped with the Westland Whirlwind HAS7. It was deployed to Borneo aboard the commando carrier HMS Albion (R07) and flew in support of actions against guerrillas during the Indonesia–Malaysia confrontation. British Army units gave 846 NAS the nickname 'Junglies' in Borneo, which the squadron has kept until today.

After returning for the Far East, 846 NAS was disbanded again, only to be reformed in 1968 at RNAS Culdrose. This time the squadron was equipped with the Westland Wessex HU5. The squadron deployed aboard the dock-landing ship HMS Fearless (L10) and conducted cold weather trials in Norway. In May 1972, the squadron was relocated to RNAS Yeovilton as the Wessex Headquarters and Trials Squadron. In February 1979 the squadron was deployed aboard the commando carrier HMS Bulwark (R08). In December of the same year 846 NAS started to convert to the Westland Sea King HC4.

In 1983, detachments were deployed aboard the carriers HMS Hermes and HMS Invincible (R05). At the end of 1983 a detachment was deployed aboard HMS Fearless to the coast of Lebanon for the eventual withdrawal of British Nationals and troops from Beirut during the Lebanese Civil War. 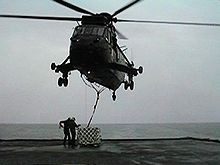 In 1990, 846 NAS took part in the Gulf War. In six weeks the squadron flew a total of 1200 hours in support of Allied ground forces. After the end of hostilities the squadron moved to northern Iraq to assist with humanitarian relief for the Kurds.

In January 1993, 846 NAS was deployed aboard the carrier HMS Ark Royal (R07) to the Adriatic as part of UN operations in Yugoslavia. Shortly after returning to the UK the squadron was deployed to Northern Ireland to replace 707 NAS to provide support to security forces. This deployment lasted until 2002.[3]

Since 2007, the 10 Sea King HC4+ helicopters of 846 NAS are heavily committed to the Kandahar and Helmand provinces in Afghanistan in support of 3 Commando Brigade Royal Marines.[4]

It is currently planned that 846 NAS will re-equip with ex RAF Merlin HC3 helicopters in 2015[5].