Culture during the Cold War

Culture during the Cold War

The Cold War was reflected in culture through music, movies, books, and other media. One element of the Cold War often seen relates directly or indirectly to the threat of a nuclear war. Another is the conflict between the superpowers in terms of espionage. Many works use the Cold War as a backdrop, or directly take part in fictional conflict between the U.S. and the U.S.S.R. The period 1953-1962 saw Cold War themes first enter the mainstream culture as a public preoccupation.

The Cold War was also reflected in the attitudes of people in their everyday lives. In the United States, the Hollywood blacklist determined who would create, work on, and star in motion pictures; in politics the House Un-American Activities Committee questioned those thought to be communist sympathizers.

The House Un-American Activities Committee interfered in American cultural life through its questioning of actors, directors, and others who produced movies in Hollywood. The effect of this questioning was the Hollywood blacklist, and was felt far beyond Hollywood.

Jackie Robinson was called before the House Un-American Activities Committee, specifically stating that he was not a Communist.[1]

Books and other works

Wendy's Hamburger Chain ran a television commercial showing a supposed "Soviet Fashion Show", which featured the same large, unattractive woman wearing the same dowdy outfit in a variety of situations, the only difference being the accessory she carried (for example, a flashlight for 'nightwear' or a beach ball for 'swimwear').

Daisy was the most famous campaign commercial of the Cold War.[1] Aired only once, on 7 September 1964, it was a factor in Lyndon B. Johnson's defeat of Barry Goldwater in the 1964 presidential election. The contents of the commercial were controversial, and their emotional impact was searing.

The commercial opens with a very young girl standing in a meadow with chirping birds, slowly counting the petals of a daisy as she picks them one by one. Her sweet innocence, along with mistakes in her counting, endear her to the viewer. When she reaches "9", an ominous-sounding male voice is suddenly heard intoning the countdown of a rocket launch. As the girl's eyes turn toward something she sees in the sky, the camera zooms in until one of her pupils fills the screen, blacking it out. The countdown reaches zero, and the blackness is instantly replaced by the thunderous flash of a nuclear explosion, followed by a billowing mushroom cloud.

As the firestorm rages, a voiceover from Johnson states emphatically, "These are the stakes! To make a world in which all of God's children can live, or to go into the dark. We must either love each other, or we must die." Another voiceover then says, "Vote for President Johnson on November 3. The stakes are too high for you to stay home." (Two months later, Johnson won the election in an electoral landslide.)

Bear in the woods

Bear in the woods was a 1984 campaign advertisement endorsing Ronald Reagan for President. This campaign ad depicted a brown bear wandering through the woods (likely implying the Soviet Union) and suggested that Reagan was more capable of dealing with the Soviets than his opponent, in spite of the fact that the ad never explicitly mentioned the Soviet Union, the Cold War or Walter Mondale.

The 1959 film On the Beach, depicted a gradually dying, post-apocalyptic world in Australia that remained after a nuclear Third World War. Other films include:

In addition to fears of a nuclear war between the United States and the Soviet Union, during the Cold War, there were also fears of a direct, large scale conventional conflict between the two superpowers.

Other films about U.S./Soviet fears and rivalry

The United States and the Soviet Union engaged in a competition in the arts as well, mainly in ballet. The Americans and the Soviets would send previews of their country's ballets to prove their superiority. In America, this caused a dramatic increase in government funding. In both countries, ballet was turned into powerful political propaganda, and they used dance to reflect life style in the "battle for the hearts and minds of men."

Jazz was also a useful tool for the United States State Department to show off the United States democracy, as jazz was a democratic music form, free flowing and improvised. Jazz tours of the Soviet Union were organized in 1956, and lasted through the 1970s.[6]

Along with ballet, the two countries also competed in such things as theatre, chess, and even who could reach the moon first. As well when it came to sports the two countries both competed in the Olympics during the Cold War period which also created a lot of hostilities.[7] David Caute, author of "The Dancer Defects", goes into detail each nation and how they could have "won" the cultural war. He ends up not nearly as much as declaring a winner, but more so looks into how each nation both had its great strengths. Russia excelled with plays, and was well known for its ballet. Whereas the West (United States in this case) showed a lot of power in technology, and the famous chess player Bobby Fischer.[8]

Stephen J. Whitfield writes in his article titled The Cultural Cold War As History that these two nations were not fighting their cultures against each other, but more onto their own citizens. As well that many things that were going on during the Cold War were purely done as an intent to create fear among African Americans, especially within the United States.[9]

Musicians of these decades, especially in Jazz and Folk Music, were influenced by the shadow of nuclear war. Probably the most famous, passionate and influential of all was Bob Dylan, notably in his songs Masters of War and A Hard Rain's a-Gonna Fall (written just before the Cuban Missile Crisis). In 1965 Barry McGuire's version of P. F. Sloan's apocalyptic Eve of Destruction was a number one hit in the United States and elsewhere.

There were many protest songs during the 1980s that reflected general unease with the escalating tensions with the Soviet Union brought on by Ronald Reagan's and Margaret Thatcher's hard line against the Soviets. For example, various musical artists wore military uniform-like costumes, as a reflection of the increased feeling of militarism seen in the 1980s. Songs symbolically showed the superpowers going to war, as in the Frankie Goes to Hollywood song "Two Tribes." This song's MTV music video featured caricatures of United States President Ronald Reagan and Soviet President Konstantin Chernenko in a wrestling match.

Other songs expressed fear of World War III, as in the song, "Russians", where Sting eloquently states, "I don't subscribe to his [Reagan's or Khrushchev's] point of view" (that Reagan would protect Europe, or that Khrushchev would "bury" the West). Other examples include Sly Fox's "Let's go all the way", a song about "going all the way" to nuclear war; The Escape Club's "Wild Wild West" with its various references to the Cold War; the Genesis song "Land of Confusion" expressed a desire to make some sense out of the world, especially in relation to nuclear war.

Probably the most famous of the 1980s songs against increased confrontation between the Soviets and the Americans was Nena's "99 Luftballons", which described the events that could lead to a nuclear war.

Imperiet — "Coca Cola Cowboys" — a Swedish rock song about how the world is divided by two super powers that both claim to represent justice.

Roman Palester, a classical music composer had his works banned and censored in Poland and the Soviet Union, as a result of his work for Radio Free Europe, even though he was thought to be Poland's greatest living composer at the time.[10] 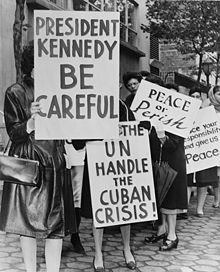 Anti-nuclear protests first emerged in the late 1950s and early 1960s.[11] In the United Kingdom, the first Aldermaston March, organised by the Campaign for Nuclear Disarmament, took place in 1958.[12][13] In 1961, at the height of the Cold War, about 50,000 women brought together by Women Strike for Peace marched in 60 cities in the United States to demonstrate against nuclear weapons.[14][15] In 1964, Peace Marches in several Australian capital cities featured "Ban the bomb" placards.[16][17]

In the early 1980s, the revival of the nuclear arms race triggered large protests about nuclear weapons.[18] In October 1981 half a million people took to the streets in several cities in Italy, more than 250,000 people protested in Bonn, 250,000 demonstrated in London, and 100,000 marched in Brussels.[19] The largest anti-nuclear protest was held on June 12, 1982, when one million people demonstrated in New York City against nuclear weapons.[20][21][22] In October 1983, nearly 3 million people across western Europe protested nuclear missile deployments and demanded an end to the arms race; the largest crowd of almost one million people assembled in the Hague in the Netherlands.[23] In Britain, 400,000 people participated in what was probably the largest demonstration in British history.[24]

A pamphlet was circulated with the title The Red Record of Senator Claude Pepper, [25] which painted him as a communist sympathiser, and cost him the election. He later served in the United States House of Representatives.