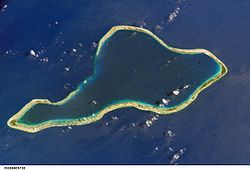 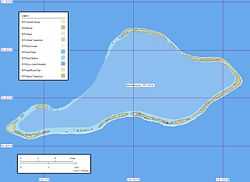 Even though ancient Polynesians knew Mururoa Atoll by the ancestral name of Hiti-Tautau-Mai, there is no firm historical evidence that it has been permanently inhabited.

The first recorded European to visit this atoll was Commander Philip Carteret on HMS Swallow in 1767, just a few days after he had discovered Pitcairn. Carteret named Mururoa "Bishop of Osnaburgh Island".

Mururoa, and its sister atoll Fangataufa, were the site of extensive nuclear testing by France between 1966 and 1996, as well as the site of numerous protests by various vessels, including the Rainbow Warrior. The atoll was officially established as a nuclear test site by France on September 21, 1962, with the construction of various infrastructures commencing in May 1963. The Direction des Centres d'Experimentation Nucleaires (DIRCEN) was made responsible for the firing of the nuclear shots. The atoll of Hao, 245 nautical miles (450 km; 280 mi) to the north-west of Mururoa, was chosen as a support base for the nuclear tests and other operations.

The first nuclear test was conducted on July 2, 1966, code named Aldebaran. 41 atmospheric nuclear tests were conducted at Mururoa between 1966 and 1974. Most of these tests were conducted on the western end of the atoll designated as Dindon. Smaller shots were fired on the northern end of the atoll designated as Denise. Three nuclear devices were detonated on barges, three were air dropped from bombers, and the rest were suspended from helium filled balloons.

France abandoned nuclear testing in the atmosphere in 1974 and moved testing underground in the midst of intense world pressure which was sparked by the New Zealand Government of the time, which sent two frigates, HMNZS Canterbury and Otago, to the atoll in protest for a nuclear free Pacific. A total of 147 underground nuclear tests were conducted at Mururoa and Fangataufa. Shafts were drilled deep into the volcanic rocks underlying the atolls where nuclear devices were detonated. This practice created much controversy as cracking of the atolls was discovered, resulting in fears that the radioactive material trapped under the atolls would eventually escape and contaminate the surrounding ocean and neighboring atolls. A 1979 test conducted at half the usual depth caused a large submarine landslide on the southwest rim of the atoll.

French president Jacques Chirac’s decision to run a nuclear test series at Mururoa in 1995, just one year before the Comprehensive Test Ban Treaty was to be signed, caused worldwide protest, including an embargo of French wine. These tests were meant to provide the nation with enough data to improve further nuclear technology without needing additional series of tests. The test site at Mururoa was dismantled following France’s last nuclear test to date, detonated on January 27, 1996, but the atoll is still guarded by the French Forces.