Colombia seeks diplomatic and commercial relations with all countries, regardless of their ideologies or political or economic systems. For this reason, the Colombian economy is very open, relying on international trade and following the guidelines given by the international law.

Regional relations remain good despite occasional issues with neighbors, especially regarding spillover from Colombia's armed conflict, including cross-border guerrilla crossings, the flow of refugees, and the spread of drug crops. These issues are of particular concern to the bordering countries of Brazil, Ecuador, Panama, Peru, and Venezuela. For example, Ecuador has closed its main border crossing with Colombia every night since August 2002, when evidence emerged that Colombian guerrillas and paramilitaries were asserting control over Ecuador's border communities. On May 1, 2004, Ecuador placed further stringent visa restrictions on Colombians seeking to enter Ecuador. Relations with Nicaragua and Venezuela have been strained over territorial disputes. Bilateral committees are negotiating the dispute with Venezuela over waters in the Gulf of Venezuela. Other issues with Venezuela include the presence of illegal undocumented Colombians in Venezuela, and activities of Colombian narcotics traffickers, and Venezuela's support for the Guerrillas in Colombia.

In 1969, Colombia formed what is now the Andean Community along with Bolivia, Chile, Ecuador, and Peru (Venezuela joined in 1973, and Chile left in 1976).

In the 1980s, Colombia broadened its bilateral and multilateral relations, joining the Contadora Group, the Group of Eight (now the Rio Group), and the Non-Aligned Movement, which it chaired from 1994 until September 1998. In addition, it has signed free trade agreements with Chile, Mexico, and Venezuela.

Colombia has traditionally played an active role in the United Nations and the Organization of American States and in their subsidiary agencies. Former President César Gaviria became Secretary General of the OAS in September 1994 and was reelected in 1999. Colombia was a participant in the December 1994 and April 1998 Summits of the Americas and followed up on initiatives developed at the summit by hosting two post-summit, ministerial-level meetings on trade and science and technology.

Colombia regularly participates in international fora, including CICAD, the Organization of American States' body on money laundering, chemical controls, and drug abuse prevention. Although the Colombian Government ratified the 1988 UN Convention on Narcotics in 1994—the last of the Andean governments to do so—it took important reservations, notably to the anti-money-laundering measures, asset forfeiture and confiscation provisions, maritime interdiction, and extradition clauses. Colombia subsequently withdrew some of its reservations, most notably a reservation on extradition.

Maritime boundary dispute with Venezuela in the Gulf of Venezuela; territorial disputes with Nicaragua over Archipelago de San Andrés y Providencia and Quita Sueño Bank. The United States disputes sovereignty with Colombia over the Serranilla Bank and the Bajo Nuevo Bank. Quita Sueño Bank is claimed by the United States to be a submerged reef, and thus does not recognize the sovereignty of any nation over the bank.

Defense treaties to which Colombia is a party include the Inter-American Treaty of Reciprocal Assistance of 1947 (the Rio Treaty). Regional treaties include the Andean Pact, now known as the Andean Community, which also includes Bolivia, Ecuador, and Peru, the bodies and institutions making up the Andean Integration System (AIS). Colombia has signed free-trade agreements with Chile, Mexico, and Venezuela. The country has a strong bilateral trade agreement with Venezuela. The Uribe administration strongly favors extending these bilateral trade agreements across the hemisphere. Trade agreements include the Agreement on Trade, Economic, and Technical Cooperation Between the Caribbean Community and Common Market (Caricom) and the Government of the Republic of Colombia. Colombia has also signed and ratified 105 international treaties or agreements relating to the environment. These include the Antarctic Treaty and Nuclear Test Ban Treaty and conventions on Biodiversity, Climate Change, Desertification, Endangered Species, Hazardous Wastes, Marine Life Conservation, Ozone Layer Protection, Ship Pollution, Tropical Timber 83, Tropical Timber 94, and Wetlands. It has signed, but not ratified, the Antarctic-Environmental Protocol and conventions on Law of the Sea and Marine Dumping. Colombia also has signed the Treaty on the Non-Proliferation of Nuclear Weapons and the Tlatelolco Treaty. By 1975 signatories to the 1974 Declaration of Ayacucho, of which Colombia was one, had decided on limitations to nuclear, biological, and chemical weapons.

Colombia is also a member of the International Criminal Court with a Bilateral Immunity Agreement of protection for the United States-military (as covered under Article 98).

Present-day Colombia and Ecuador trace back established official diplomatic relations to December, 1831 with the signing of the Treaty of Pasto, in which both countries recognized each other as sovereign states. The Ecuadorean diplomatic mission in New Granada (Colombia) did not open until 1837. It wasn't until 1939 that Ecuador raised the diplomatic mission's status to an official Embassy. Colombia did the same the following year in 1940.[2]

The relationship between the two Latin American countries has evolved amid conflicts over the San Andrés y Providencia Islands located in the Caribbean sea close to the Nicaraguan shoreline and the maritime boundaries covering 150,000 km2 (57,915 sq mi) that included the islands of San Andrés, Providencia and Santa Catalina and the banks of Roncador, Serrana, Serranilla and Quitasueño as well as the arbitrarily designed 82nd meridian west which Colombia claims as a border but which the International Court has sided with Nicaragua in disavowing.[5]

The relationship has developed since the early 16th century, when Spanish empire colonizers created the Province of Santa Marta (now Colombia)[unreliable source?][6] and the Province of New Andalucia (now Venezuela).[7] The countries share a history for achieving their independence under Simón Bolívar and becoming one nation—the Gran Colombia—which dissolved in the 19th century.[8] Following then, the overall relationship between the two countries has vacillated between cooperation and bilateral struggle.

Relations with the United States

US President Bill Clinton and daughter Chelsea during a visit to Cartagena, Colombia, where they were greeted by a Vallenato children group.

During the last fifty years, different American governments and their representatives have become involved in Colombian affairs through the implementation of policies concerned with the above issues. Some critics of current US policies in Colombia, such as Law Professor John Barry, consider that US influences have catalyzed internal conflicts and substantially expanded the scope and nature of human rights abuses in Colombia.[9] Supporters, such as Under Secretary of State Marc Grossman, consider that the U.S. has promoted respect for human rights and the rule of law in Colombia, in addition to the fight against drugs and terrorism.[10] 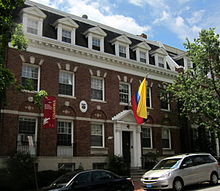 Embassy of Colombia in Washington, D.C.

The country traditionally has had good relations with the United States. Relations were strained during the presidency of Ernesto Samper (1994–98) due to accusations of receiving illegal campaign funding from the Cali Cartel. Relations between the two countries greatly improved during the Pastrana administration (1998–2002). In January 2000, the Clinton administration pledged more than US$1 billion of mainly military assistance to Colombia to assist the antidrug component of President Pastrana's strategy known as Plan Colombia.

Relations with the United States became a foreign policy priority for the Uribe administration, and President Uribe is an important ally in George W. Bush's "War on Terrorism". In March 2002, in response to a request from Bush, the U.S. Congress lifted restrictions on U.S. assistance to Colombia to allow it to be used for counterinsurgency in addition to antidrug operations. U.S. support for Colombia's antidrug-trafficking efforts included slightly more than US$2.5 billion between 2000 and 2004, as compared with only about US$300 million in 1998. In addition to the challenge posed to the United States by Colombian drug trafficking, illegal Colombian immigrants in the United States are an issue in U.S.-Colombian relations. An estimated one million illegal Colombian immigrants were in the United States by 1999. In early 2003, Colombia ranked among the top seven countries in the world exporting illegal aliens to the United States.

Under the Uribe administration, Colombia's relations with the European Union (EU) have been cordial. Representatives of the EU have been critical of Colombia's antiguerrilla and antidrug strategies in several respects. The EU is particularly concerned about the potential for increased human rights abuses within Colombia at the hands of both government forces and illegal armed groups, and it has continued to distance itself from Plan Colombia. The EU is in favor of a negotiated solution to the nation's internal conflict. EU aid to Colombia has mainly consisted of social, economic and development investments.

In 2004, the EU as an entity did not offer unrestricted support for the Uribe government's peace initiative with paramilitaries, citing concerns over the possible lack of a credible and comprehensive peace strategy and its application, but it did approve 2 million USD in aid for the process. Individual EU members such Sweden, Italy, Germany and the Netherlands also provided limited support on their own. [1]

Full direct diplomatic relations were established in 1953, with the exchange of the first ambassadors. Canada has an embassy in Bogotá. Colombia has an embassy in Ottawa and 2 Consulates-General (in Montreal and Toronto). Both countries are full members of the Organization of American States.

The relationship between the two countries has been gradually increasing with more frequent diplomatic visits to promote political, commercial cultural and academic exchanges. Colombia is currently the commercial point of entry into Latin America for Indian companies.[33]

In the mid 1950s both countries officially established diplomatic relations and set up embassies in Bogotá and Tel Aviv respectively.[34] Relations improved tremendously in 1988 when major trade agreements were signed between Israel and Colombia.

The relationship was officially established in 1908, only interrupted between 1942 and 1954 with the surge of World War II. Relations are mostly based on commercial trade that has favored Japan interests, cultural exchanges and technological and philanthropic aid to Colombia.[35]

On August 22, 2011 Colombia officially recognized the National Transitional Council as the only legitimate representative of the Libyan people.

By the 1990s, Colombia had become the world's leading supplier of refined cocaine and a growing source for heroin. More than 90% of the cocaine that entered in the 1990s the United States was produced, processed, or transshipped in Colombia. The cultivation of coca reduced between 1995 and 1999 from 3,020 to 1,100 km2 (425 sq mi), primarily in areas where government control is more active.

Despite the death of Medellín cartel drug kingpin Pablo Escobar in 1993 and the arrests of major Cali cartel leaders in 1995 and 1996, Colombian drug cartels remain among the most sophisticated criminal organizations in the world, controlling cocaine processing, international wholesale distribution chains, and markets. In 1999 Colombian police arrested over 30 narcotraffickers, most of them extraditable, in "Operation Millennium" involving extensive international cooperation. More arrests were made in a following "Operation Millennium II."

Colombia is engaged in a broad range of narcotics control activities. Through aerial spraying of herbicide and manual eradication, Colombia has attempted to keep coca, opium poppy, and cannabis cultivation from expanding. The government has committed itself to the eradication of all illicit crops, interdiction of drug shipments, and financial controls to prevent money laundering. Alternative development programs were introduced in 1999.

Corruption and intimidation by traffickers complicate the drug-control efforts of the institutions of government. Colombia passed revised criminal procedures code in 1993 that permits traffickers to surrender and negotiate lenient sentences in return for cooperating with prosecutors. In December 1996 and February 1997, however, the Colombian Congress passed legislation to toughen sentencing, asset forfeiture, and money-laundering penalties.

In November 1997, the Colombian Congress amended the constitution to permit the extradition of Colombian nationals, albeit not retroactively. In late 1999, President Pastrana authorized the first extradition in almost 10 years of a Colombian trafficker to stand trial for U.S. crimes. Three such extraditions to the United States have taken place, the most recent in August 2000, with cases against others pending in Colombian courts. Under the Pastrana administration, Plan Colombia was developed and implemented with U.S. backing.