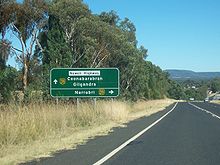 The Newell Highway is the longest highway in New South Wales, Australia. It runs parallel to the eastern coast about 400 kilometres inland, and is the main inland direct road link from Victoria to Queensland, bypassing the more congested coastal areas of New South Wales. It runs through Boggabilla, Moree, Narrabri, Coonabarabran, Gilgandra, Dubbo, Parkes, Forbes, West Wyalong, Narrandera and Jerilderie. Unlike most highways in New South Wales, which are named after early explorers, the Newell Highway is named after the head of the Government Main Roads Department in the 1930s.

The highway crosses the Murray River (the New South Wales/Victoria border) at Tocumwal and continues south through Victoria as the Goulburn Valley Highway.