Return to House on Haunted Hill

Return to House on Haunted Hill 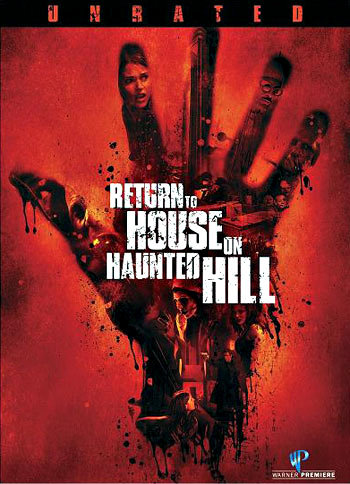 Filming began in & , on September 11, 2006, where they used various sets and an old as locations that substituted the house in the remake.

reprised his role as Dr. Richard B. Vannacutt. He stated that he would have a larger role in this film, and whilst he would have no lines, it made his character "more menacing". He then went on to say that much of the film will be in the lower floors of the house. Combs did however, do voice-overs after the initial filming which ended up in an alternate scene on the HD DVD Version.

The HD DVD and Blu-ray versions of the movie offer the option of watching this film using Navigational Cinema. This allows a branching storyline, with several different paths and endings.

1. Should Ariel return her sister's phone call? ‘Yes’ or ‘No’

This choice occurs at the very beginning of the film, when Ariel's assistant tells her that Sara tried calling. In the theatrical version of the film, Ariel does not return the phone call, but instead goes about her business.

If ‘Yes’ is chosen: Ariel and her assistant call Sara, only to hear a creepy and frightening voice whisper Ariel's name. This choice ultimately has no effect on the film's outcome.

This choice occurs during the scene in which two lesbian ghosts attempt a seduction of Harue. In the theatrical version of the film, Harue resists the ghosts and is chased towards Dr. Vannacutt... who kills her.

If ‘No’ is chosen: Harue accepts and returns the sexual advances of both lesbian ghosts. After a longer and more graphic sex scene, Harue is warned by the lesbians that leaving this house immediately is her only chance for survival. Harue follows this advice, runs and indeed survives. Much later in the film, she is seen again, finding the Baphomet Idol washed ashore (right before the end credits roll).

3. Should Michelle let Richard go to Ariel? ‘Yes’ or ‘No’

If ‘No’ is chosen: Michelle stops Richard, telling him they aren't going anywhere without Desmond's permission. However, as she tries phoning Desmond, a ghost on a bloody stretcher flies down the hallway past them. Richard investigates the bloody stretcher, finds and pockets a scalpel. As a result, Ariel is fatally stabbed by Richard during the film's climax, but doesn't realize she's dead until the very end.

This choice actually occurs at a point that is edited out of the film's theatrical version. It takes place during the scene in which Samuel gets orders from ‘Desmond’ to enter the asylum. By default, Samuel ignores the call. Paul pokes fun at him, and this scene progresses as in the film's theatrical cut.

If ‘Yes’ is chosen: Samuel answers the phone. It is also revealed that he and Harue are working against Desmond and the rest of his men, to recover the Idol on their own and split the profits between themselves. This choice has no long-term effect on the film's outcome.

This choice occurs after Paul and Samuel enter the Asylum; Paul has a chance to run away while Samuel is distracted. In the film's theatrical version, Paul does not run away; this resulting in his surviving the film's end.

If ‘Yes’ is chosen: Paul escapes from Samuel and discovers a ghost impersonating Ariel. She seduce Paul by leading him into a bedroom and sprawling naked under a sheet. Paul, however, removes the sheet to discover Warren's corpse... and the ghost-nurse! Paul escapes from the bedroom but dies later in the crematorium; the ghost-nurse kisses Paul, then rips out and licks his heart... just before Ariel destroys the Idol.

This choice occurs in the Room, where Desmond seals Kyle's fate by tossing him into the freezing pool. In the film's theatrical version, Ariel dives into the huge ice-bath in a vain attempt to rescue Kyle; he sinks to his death, while she is lifted to safety by Paul and Richard. All of this enables Michelle to get the map and flee with Desmond.

If ‘Get map’ is chosen: Ariel rushes for the map, but a gunfight breaks out... killing every character except Kyle, who is then killed by a ghost in the water. The movie ends.

This choice occurs during the scene in which Desmond is running down a hallway, after Michelle is killed. In the film's theatrical version, Desmond stops at the doorway and does not enter the film-room. As a result, he survives... only to die in the crematorium after a final confrontation with Ariel, Paul and Richard.

If ‘Yes’ is chosen: Desmond locates a projector showing footage of Dr. Vannacutt... who suddenly climbs out of the picture and impales Desmond's skull upon the projector. As a result of this choice, Richard and Paul and Ariel do not meet up with Desmond in the crematorium. Yet the scene plays out very similarly, with Paul fleeing the cremated ghosts; and the film's ending is otherwise unaffected.

A note on the alternate endings

There are actually several different endings to the ‘Navigational Cinema’ version of the film. The ending relies mostly upon the viewer's decisions as to whether Michelle should let Richard go to Ariel and whether Paul should try running from Samuel. There are four possible outcomes to this:

1. If both Ariel and Paul survive, they escape from the asylum together... as in the film's theatrical version.

2. If Ariel dies but Paul survives, the two enter the entrance with Ariel thinking they are reunited, but Paul ends up walking through Ariel's ghost. He escapes from the asylum alone, while Ariel realizes she is dead and visits her corpse.

3. If Ariel survives but Paul dies, she escapes from the asylum alone.

4. If both Ariel and Paul die, Ariel finds that she is unable to leave the asylum. Paul then finds Ariel visiting her corpse, where they realize they're stuck in the asylum.

Additionally, depending on whether Harue resists the lesbian ghosts, an extra scene will play out after these ending but before the credits.

Soon after the film's completion it was revealed that the DVD would be released on , for and in a separate news article, the coming October 3rd for . Dark Castle Entertainment however decided to push the release date to , and , for North America and Australia respectively. For North America there will be rated and unrated releases, the 'rated' is Rated R for strong bloody horror violence, language and brief sexuality/nudity, but the extra content on the 'unrated' and other subsequent discs, means that it will go unrated. The Australian version of the film is the same as the US Unrated Version.

The rated release does not feature the movie's epilogue (scene after closing credits), nor Mushroomhead's music video. The unrated release includes both.

There will also be Blu-ray and versions, also unrated, both including , a feature enabling viewers to interact with the when at certain points it allows you to choose from two different paths. It will include seven viewer choices leading to 96 possible storylines, according to Joel Silver in a 'Return to House on Haunted Hill' featurette viewable online. In another interview, Silver announced the film will have four s, which can be achieved through the different choices you must make throughout the film.