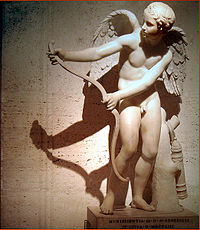 Classical statue of Cupid with his bow

In popular culture, Cupid is frequently shown shooting his bow to inspire romantic love, often as an icon of Valentine's Day. He is now in the current culture the personification of love and courtship in general.

In the Roman version, Cupid was the son of Venus (goddess of love) and Mars.[1][2] In the Greek version he was named Eros and seen as one of the primordial gods (though other myths exist as well). Cupid was often depicted with wings, a bow, and a quiver of arrows. The following story of Cupid and Psyche is almost identical in both cultures; the most familiar version is found in Ovid's Metamorphoses. When Cupid's mother Venus became jealous of the princess Psyche, who was so beloved by her subjects that they forgot to worship Venus, she ordered Cupid to make Psyche fall in love with the vilest thing in the world. While Cupid was sneaking into her room to shoot Psyche with a golden arrow, he accidentally scratched himself with his own arrow and fell deeply in love with her.

Following that, Cupid visited Psyche every night while she slept. Speaking to her so that she could not see him, he told her never to try to see him. Psyche, though, incited by her two older sisters who told her Cupid was a monster, tried to look at him and angered Cupid. When he left, she looked all over the known world for him until at last the leader of the gods, Jupiter, gave Psyche the gift of immortality so that she could be with him. Together they had a daughter, Voluptas, or Hedone, (meaning pleasure) and Psyche became a goddess. Her name "Psyche" means "soul." 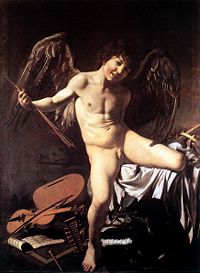 In painting and sculpture, Cupid is often portrayed as a nude (or sometimes diapered) winged boy or baby (a putto) armed with a bow and a quiver of arrows.

On gems and other surviving pieces, Cupid is usually shown amusing himself with childhood play, sometimes driving a hoop, throwing darts, catching a butterfly, or flirting with a nymph. He is often depicted with his mother (in graphic arts, this is nearly always Venus), playing a horn. In other images, his mother is depicted scolding or even spanking him due to his mischievous nature. He is also shown wearing a helmet and carrying a buckler, perhaps in reference to Virgil's Omnia vincit amor or as political satire on wars for love or love as war.

Cupid figures prominently in ariel poetry, lyrics and, of course, elegiac love and metamorphic poetry. In epic poetry, he is less often invoked, but he does appear in Virgil's Aeneid changed into the shape of Ascanius inspiring Dido's love. In later literature, Cupid is frequently invoked as fickle, playful, and perverse. He is often depicted as carrying two sets of arrows: one set gold-headed, which inspire love; and the other lead-headed, which inspire hatred.