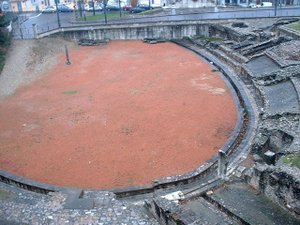 Amphithéâtre des Trois-Gaules, in Lyon. The pole in the arena is a memorial to the people killed during this persecution.

The persecution in Lyon (AD 177) was a persecution of Christians during the reign of Roman Emperor Marcus Aurelius (161-180). The account of this persecution is a letter preserved in Eusebius's Ecclesiastical History, book 5, chapter 1.

W. H. C. Frend noted that the legal situation of Christians was "riddled with ambiguities" (164-65). The policy worked out by Pliny the Younger and the Emperor Trajan a few decades earlier declared Christianity to be illegal, but that members of the faith were not to be sought, but punished if the charge was proven. Trajan also added "that if any one [Christian] denies that he is a Christian" by worship of the Roman gods, that person is to be released. Tertullian, in chapter 2 of his Apology, would later criticize Roman policy since criminals were normally tortured to confess their crimes, while Christians were tortured to renounce their faith in Christ.

Before the actual outbreak of violence, Christians were forbidden from public areas such as the marketplaces, baths, etc. The populace also attacked the Christians, robbing them, and subjecting them to other forms of abuse (HE, 5.1.5,7).

How long all of this lasted is not indicated, but eventually the authorities seized the Christians and questioned them in the forum in front of the populace. They were then imprisoned until the arrival of the governor. When the governor arrived, he interrogated them in front of the populace again, mistreating them to such a degree that Vettius Epagathus, a Christian and man of high social standing, requested permission to testify on behalf of the accused. This request was refused and instead the governor arrested Vettius Epagathus when he confessed to being a Christian (5.1.9-10).

These Christians endured torture while the authorities continued to apprehend others. Two of their pagan servants were seized and, fearing torture, falsely charged the Christians with incest and cannibalism (5.1.12-13).

What followed was the torture of the captive Christians by various means. In the end, all were killed, some of whom had recanted but later returned to the faith (5.1.45-46).