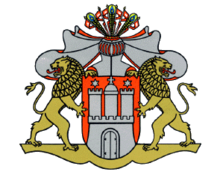 Hamburg greater coat of arms used by the Hamburg Senate.

The following is a chronological list of mayors of Hamburg, a city-state in Germany. The mayors are the head of the city-state, part of the government of Hamburg. Since 1861 according to the constitution of 28 September 1860 the state has been governed by the ten-member Senate, which had been called council (in the German language of that time: Rath) before that time. It is headed by the First Mayor of Hamburg (German title: Erster Bürgermeister der Freien und Hansestadt Hamburg) as the President of the Senate. His deputy is the Second Mayor.

Prior to World War I the two mayors were elected for one-year-terms. Until 1997 the First Mayor was primus inter pares among his colleagues in the Senate, by whom he was elected. Since then, he has been elected by the Hamburg Parliament (German: Hamburgische Bürgerschaft) and been able to appoint and dismiss other Senators.

The function of burgomaster (mayor) was usually held simultaneously by three persons, serving as an executive college. One of the three being burgomaster in chief for a year, the second being the prior burgomaster in chief, the third being the upcoming one. Therefore sometimes up to three names are mentioned for one year, since the names of the three appear in deeds, signed with or mentioning their names. The names in the list from 1239 until 1820 were archived in a book by Johann August Meister (1820). This is an incomplete list of burgomasters and uses the spelling in Meister's book, which is preserved in the Hamburg state library. After 1820 the list were added by hand.[1] On 6 August 1806 Hamburg gained sovereignty as an independent country. From 1811 to 1814 Hamburg was part of France in the Bouches-de-l'Elbe.[2]

If another reference is not noted, all mayors are taken from: Domizlaff. Das Hamburger Rathaus.

Since 1860 Hamburg had a constitution. Members of the Hamburg senate were elected by the Hamburg Parliament—not coopted by the existing senate. They were lifelong members of the senate. From the three eldest and juristic trained members the senate elected annually the First Mayor of Hamburg (German title: Erster Bürgermeister der Freien und Hansestadt Hamburg) – the presiding head – and his deputy (Second Mayor of the Free and Hanseatic city of Hamburg, German title: Zweiter Bürgermeister der Freien und Hansestadt Hamburg).

Description of the method

All mayors are taken from Domizlaff: Das Hamburger Rathaus and are listed in Erste Bürgermeister Hamburgs 1507-2008, only changes in dates are marked by an added reference.

During the German Revolution of 1918–1919 an Arbeiter- und Soldatenrat (Council of the Workers and Soldiers) was formed. From 12 November 1918 to 1919, a chairman was the head of state and city governemt: Heinrich Lauffenberg (–1919), Carl Hense (1919).[2] This is not mentioned in Domizlaff: Das Hamburger Rathaus. The period in Germany after the First World War until the takeover of power – by the Nazi Party in 1933 – is called Weimar Republic. The Hamburg Parliament was democratically elected.

In Nazi Germany the Gesetz über den Neuaufbau des Reiches (Law concerning the reconstruction of the Reich) (30 January 1934) abandoned the concept of a federal republic. The political institutions of the Länder were practically abolished altogether, passing all powers to the central government. The Hamburg Parliament had been dissolved. The First Mayor was appointed by the Reich Interior Minister, though Hitler himself reserved the right to appoint him (as was also the case with Berlin and Vienna). The real head of the Hamburg executive was the Reichsstatthalter (Regional governor or imperial governor) Karl Kaufmann: 1933–1945[4]

Appointed by the British occupation forces 1945–1946

After the Second World War until 1949, Hamburg was in the British occupation zone.

Mayors during the federal parliamentary republic of Germany.