The FIFA Confederations Cup is an association football tournament for national teams, currently held every four years by FIFA. It is contested by the winners of each of the six FIFA confederation championships (UEFA, CONMEBOL, CONCACAF, CAF, AFC, OFC), along with the FIFA World Cup winner and the host nation, to bring the number of teams up to eight. 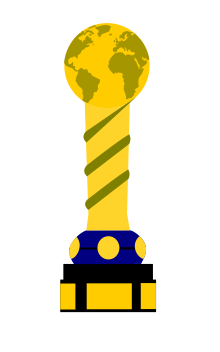 The tournament was originally organised by and held in Saudi Arabia and called the King Fahd Cup (Confederations Winners Cup or Intercontinental Championship), contested in 1992 and 1995 by the Saudi national side and some continental champions. In 1997, FIFA took over the organisation of the tournament, named it the FIFA Confederations Cup and staged the competition every two years.[citation needed]

Since 2005, it has been held every four years, in the year prior to each World Cup in the host country of the forthcoming World Cup. Considered a dress-rehearsal for the World Cup it precedes, it uses around half of the stadia intended for use at the following year's competition and gives the host nation, who qualifies for that tournament automatically, experience at a high level of competition during two years of friendlies. At the same time, participation was made optional for the South American and European champions.[1]

An earlier tournament existed that invited former World Cup winners, the Mundialito, or Copa D'Oro which celebrated the fifty year anniversary of the first World Cup. The Artemio Franchi Trophy, contested in 1985 and 1993 between the winners of the Copa America and UEFA European Football Championship, was also another example of an earlier contest between football confederations. Both of these are considered by some to be a form of an unofficial precursor to the Confederations Cup, although FIFA recognized only the 1992 tournaments onwards to be Confederations Cup winners.[2]

The Golden Ball award is awarded to the player who plays the most outstanding football during the tournament. It is selected by the media poll.

The Golden Shoe is awarded to the topscorer of the tournament. If more than one players are equal by same goals, the players will be selected based by the most assists during the tournament.

The Golden Glove is awarded to the best goalkeeper of the tournament.

FIFA Fair Play Award is given to the team who has the best fair play record during the tournament with the criteria set by FIFA Fair Play Committee.