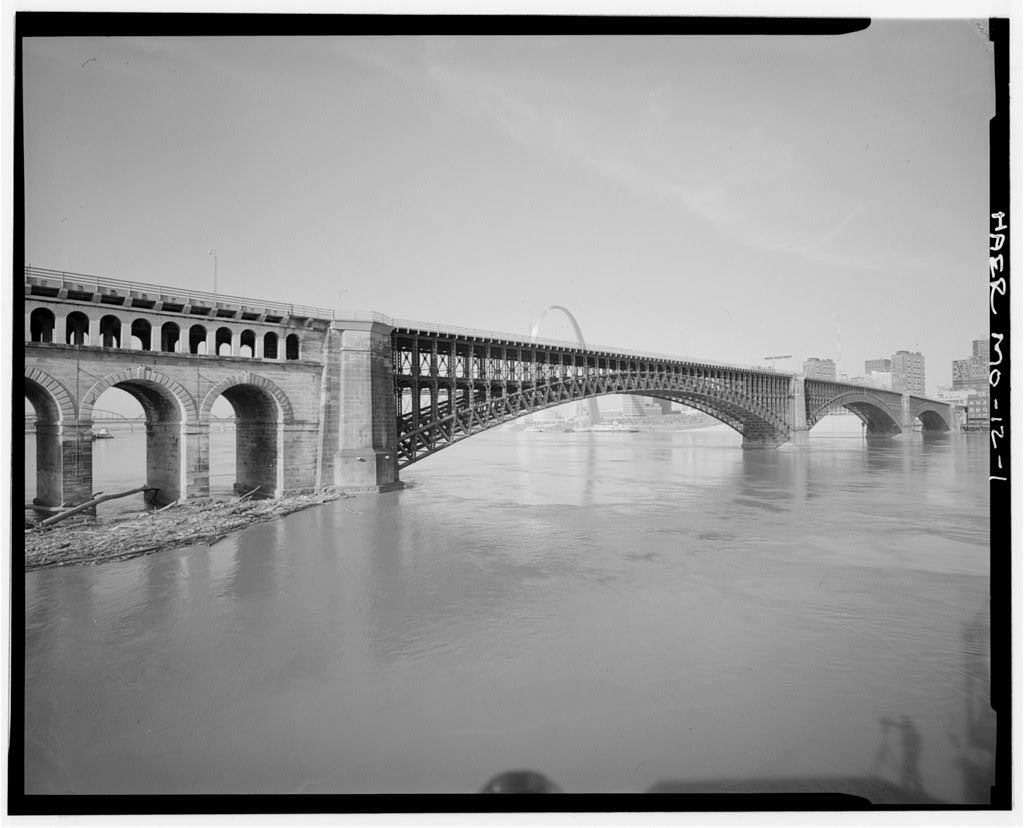 The bridge is named for its designer and builder, Captain . When completed in 1874, the Eads Bridge was the longest arch bridge in the world, with an overall length of 6,442 feet (1,964 m). The ribbed steel arch spans were considered daring, as was the use of steel as a primary structural material: it was the first such use of true steel in a major bridge project.

The Eads Bridge is still in use, and stands on the St. Louis riverfront between on the north and the grounds of the Gateway Arch to the south. Today the road deck has been restored, allowing vehicle and pedestrian traffic to cross the river. The rail deck has been in use for the light rail line since 1993.

The domination of the river trade was no longer as important as before the , and Chicago was fast gaining as the center of commerce in the West. The Bridge was conceived as a solution to the futile quest to reverse this new found eminence.The bridge, generated in controversy, was also considered a radical design solution, though the ribbed arch had been a known construction technique for centuries. The triple span, tubular metallic arch construction was supported by two shore abutments and two mid-river piers. Four pairs of arches per span (upper and lower) were set eight feet apart, supporting an upper deck for vehicular traffic and a lower deck for rail traffic.

Construction involved varied and confusing design elements and pressures. State and federal charters precluded suspension or s, or wood construction. There were also constraints on span size and regarding the height above the water line. The location dictated a change from the low Illinois floodplain of the east bank to the high Missouri cliff on the west bank of the river. The bedrock was exceedingly deep. ["From material recorded by "Kevin Murphy, Historian HAER, April 1984" in the public domain."]

These pressures resulted in a bridge noted as innovative for precision and accuracy of construction and quality control. Utilization of cast chromium steel components is arguably the first use of structural alloy steel in a major building construction. (Though the bridge as actually completed contained large - and unknown - amounts of wrought iron.) Eads argued that the great compressive strength of steel was ideal for use in the upright arch design. This decision resulted from a curious combination of chance and necessity, due to the insufficient strength of alternative material choices.

The particular physical difficulties of the site stimulated interesting solutions to construction problems. The deep caissons used for pier and abutment construction signalled a new chapter in . Unable to construct falsework to erect the arches because they would obstruct river traffic, Eads's engineers devised a cantilevered rigging system to close the arches.

Although recognized as an innovative and exciting achievement, the Eads Bridge was overcapitalized during construction and burdened with debt. With its focus on the river, St. Louis had a lack of adequate rail terminal facilities, and the bridge was poorly planned to coordinate rail access. An engineering and aesthetic success, the bridge was bankrupt within a year of opening.

In 1998, the Naval Facilities Engineering Service Center investigated the effects of the April 4, 1998 ramming of the bridge by the barge Anne Holly. The ramming resulted in the near breakaway of a ; several recommended changes reduced the odds of this happening in the future. [Marine Accident Report: Ramming of the Eads Bridge by Barges in Tow on the M/V Anne Holly with Subsequent Ramming and Near Breakaway of the President Casino on the Admiral, St. Louis Harbor, Missouri, April 4, 1998By United States National Transportation Safety Board, National Transportation Safety Board, United StatesPublished by DIANE Publishing, 2000ISBN 1428996303, 9781428996304]