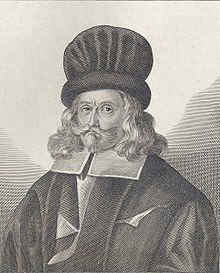 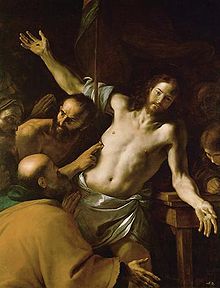 Born in the small town of Taverna in Calabria, Preti was sometimes called Il Cavalier Calabrese (the Knight of Calabria). His early apprenticeship is said to have been with the "Caravaggist" Giovanni Battista Caracciolo, which may account for his life-long interest in the style of Caravaggio.

Probably before 1630, Preti joined his brother Gregorio (also a painter), in Rome, where he became familiar with the techniques of Caravaggio and his school as well as with the work of Guercino, Rubens, Reni, Giovanni Lanfranco. In Rome, he painted fresco cycles in Sant'Andrea della Valle and San Carlo ai Catinari. Between 1644 and 1646, he may have spent time in Venice,[1] but remained based in Rome until 1653, returning later in 1660-61. He painted frescoes for the church of San Biago at Modena (app. 1651-2) and participated in the fresco decoration of the Palazzo Pamphilj in Valmontone (documented 1660-61), where he worked along with Pier Francesco Mola, Gaspar Dughet, Francesco Cozza, Giovanni Battista Tassi (il Cortonese), and Guglielmo Cortese. 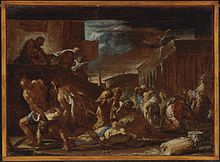 Sketch for a fresco of the gates of Naples, Art Market, London 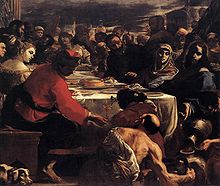 During most of 1653-1660, he worked in Naples, where he was influenced by the other major Neapolitan painter of his era, Luca Giordano. One of Preti's masterpieces were a series of large frescoes, ex-votos of the plague (which were painted on seven city gates but have since been lost to the ravages of time), depicting the Virgin or saints delivering people from the plague. Two sketches are in the Capodimonte Museum in Naples [2] and one other sketch is currently on the UK art market, see illustration. The bozzetto of the Virgin with the baby Jesus looming over the dying and their burial parties envisions a Last Judgement presided over by a woman. [3] Preti also won a commission to supervise the construction, carving, and gilding for the nave and transept of San Pietro a Maiella.

Having been made a Knight of Grace in the Order of St John, he visited the order’s headquarters in Malta in 1659 and spent most of the remainder of his life there. Preti transformed the interior of St. John's Co-Cathedral in Valletta, with a huge series of paintings on the life and martyrdom of St. John the Baptist (1661-1666). In Malta one also can find many paintings of Preti in private collections and in parish churches. His increased reputation led to an expanded circle of patrons, and he received commissions from all over Europe.

Preti was fortunate to enjoy a long career and have a considerable artistic output. His paintings, representative of the exuberant late Baroque style, are held by many great museums, including important collections in Naples, Valletta, and in his hometown of Taverna.