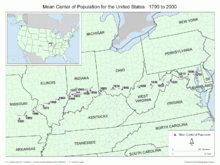 The Missouri bellwether is a political phenomenon that notes that the state of Missouri voted for the winner in all but two U.S. Presidential election since 1904 (the exceptions are 1956 and 2008). While states like Ohio, Iowa, Nevada, and New Mexico have been arguably stronger indicators of political trends in recent years, Missouri has been a consistent swing state since 1904. Prior to the 2008 elections, Lincoln County, Missouri was said to be the only bellwether county in a bellwether state.[1] Missouri is also considered a bellwether of U.S. views on hot-button social issues such as stem cell research,[2] and school vouchers.[3] Some economists also consider the state a bellwether for economic trends such as consumer confidence and unemployment.[4]

From 1904 through to 2008, Missouri's electoral votes went to the person who became President of the United States with two exceptions. The first was in 1956 during the Dwight Eisenhower landslide, when Missouri went to neighboring Illinois Governor Adlai Stevenson. The second was the 2008 victory of Barack Obama, where Missouri slightly leaned towards Sen. John McCain. Missouri's accuracy in voting with the national consensus includes the "too close to call" elections of 1948, 1960, 1976, and 2000. (Although in 2000 Missouri indicated only the winner of the electoral vote, not the winner of the popular vote.)

In 2006, Missouri's bellwether status gained renewed attention because of the 2006 Senate race between incumbent Republican Senator Jim Talent and Democratic State Auditor Claire McCaskill, which was considered vital to which party controls Congress.[5][6] Additionally, Missouri had a ballot measure, Missouri Amendment Two, regarding stem cell research that drew national attention as an indicator of mainstream sentiment towards this controversial issue.[7] On Election Day 2006, both McCaskill and Amendment 2 narrowly received majority support among Missouri voters. The victories of McCaskill and five other Democratic colleagues allowed their party to regain power in the U.S. Senate.[8]

During the 2008 presidential election, some analysts and correspondents[who?] said Missouri shows the ideological ranges for each party (e.g., liberal and moderate democrats, evangelicals, etc.). In the primaries, the state voted for the presidential candidates who eventually secured their parties' nomination: John McCain (Republican) and Barack Obama (Democratic).

Location and demographics are most often cited as the cause of Missouri's bellwether status. The Chicago Tribune calls Missouri the "bellwether state that almost exactly mirrors the demographic, economic and political makeup of the nation."[9] A microcosm of the country's current political makeup, Missouri has its two Blue "coasts" of St. Louis and Kansas City with Red middle and southern areas (see Red states and blue states).

Since 1980, the mean center of U.S. population of the United States (which has been moving steadily westward) has been in Missouri (currently in Phelps County). Missouri is in the center of the country, distant from the coast and the national borders. It shares a border with two Southern states, three Plains states, two Midwestern states, and one other Border state.

Missouri was a border state in the American Civil War. After the state legislature voted to secede, it was represented by competing factions in both the Confederate and Union governments. Missourians fought on both sides of the conflict, and the state was the site of repeated military clashes throughout the war.

One of the more important national phenomena that has not had the same impact in Missouri as in the rest of the country is the influx of immigrants, particularly Latinos. Analysts and journalists in recent times have pointed to states like Ohio[10], New Mexico[11], Pennsylvania[12], and California[13] as more accurate political and cultural bellwethers. As for Missouri, Slate columnist Chris Suellentrop has said that the state "isn't so much a bellwether as it is a weathervane: It doesn't swing the country, the country swings it..." and that Missouri is a better indicator of whether a trend is mainstream than of what the next new trend will be.[14] In 2008 however, Missouri very narrowly voted for Republican John McCain despite a 53% winning percentage victory for Democrat Barack Obama and nationwide dissatisfaction with the Bush administration. As a result, its accuracy rate for the last 26 presidential elections is now about 92.6%. Ohio has about the same record of voting for the winning candidate in missing twice; it has voted for the winner of every presidential election since 1896 except for 1944 and 1960, with no Republican ever winning the White House without Ohio. Nevada has been carried by the winner in every presidential election since 1912, except just once in 1976. Also, New Mexico has voted for the winner of every presidential election from its statehood in 1912 except in the 1976 and 2000 elections; however, the New Mexicans gave their electoral votes to the popular vote winner Al Gore in 2000.