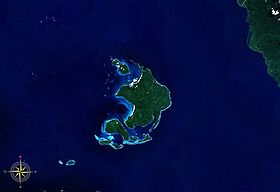 The Duke of York Islands, (formerly German: Neu Lauenburg), are a group of islands located in East New Britain Province, Papua New Guinea. They are found in St George's Channel between New Britain and New Ireland islands and form part of Bismarck Archipelago. The Duke of York Islands were named in 1767 by Philip Carteret to honor Prince Edward, son of Frederick, Prince of Wales and younger brother of George III of the United Kingdom.

The Duke of York islands consist of a total of thirteen islands and cover 58 km² in area. The largest island of the group is Duke of York Island and other islands include Makada, Kabakon, Kerawara, Ulu, and Mioko.

The island group lies in a seismic active zone, where two tectonic plates push upon each other. Earthquakes and tsunamis are not uncommon for the inhabitants of the islands.

The islands are low-lying, and are threatened with inundation due to rising sea levels. On 28 November 2000 the evacuation and resettlement of one thousand inhabitants to New Britain was announced.[1]