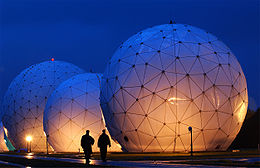 A radome (radar dome) is a structural, weatherproof enclosure that protects a microwave or radar antenna. The radome is constructed of material that minimally attenuates the electromagnetic signal transmitted or received by the antenna. In other words, the radome is transparent to radar or radio waves. Radomes protect the antenna surfaces from the environment (e.g., wind, rain, ice, sand, and ultraviolet rays) and/or conceal antenna electronic equipment from public view. They also protect nearby personnel from being accidentally struck by quickly-rotating antennas.

Radomes can be constructed in several shapes (spherical, geodesic, planar, etc.) depending upon the particular application using various construction materials (fibreglass, PTFE-coated fabric, etc.). When used on UAVs or other aircraft,[1] in addition to such protection, the radome also streamlines the antenna system, thus reducing drag. 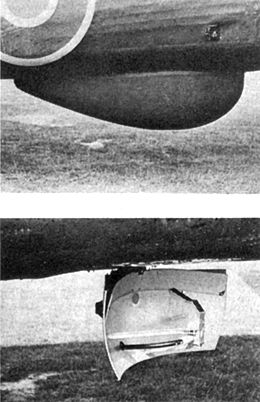 One of the first radomes: the radome (top) covering the H2S radar system rotating antenna (bottom) on a Halifax bomber

A radome is often used to prevent ice and freezing rain from accumulating directly onto the metal surface of the antennas. In the case of a spinning radar dish antenna, the radome also protects the antenna from debris and rotational irregularities due to wind. Its shape is easily identified by its hardshell, which has strong properties against being damaged.

For stationary antennas, excessive amounts of ice can de-tune the antenna to the point where its impedance at the input frequency rises drastically, causing voltage standing wave ratio (VSWR) to rise as well. This reflected power goes back to the transmitter, where it can cause overheating. A foldback circuit can act to prevent this; however, one drawback of its use is that it causes the station's output power to drop dramatically, reducing its range.

A radome prevents that by covering the antenna's exposed parts with a sturdy, weatherproof material, typically fibreglass, which keeps debris or ice away from the antenna to prevent any serious issues. It is interesting to note that one of the main driving forces behind the development of fibreglass as a structural material was the need during World War II for radomes.[2] When considering structural load, the use of a radome greatly reduces wind load in both normal and iced conditions. Many tower sites require or prefer the use of radomes for wind loading benefits and for protection from falling ice or debris.

Sometimes radomes may be unsightly if near the ground, and heaters could be used instead. Usually running on direct current, the heaters do not interfere physically or electrically with the alternating current of the radio transmission.

For radar dishes, a single, large, ball-shaped dome (usually geodesic) also protects the rotational mechanism and the sensitive electronics, and is heated in colder climates to prevent icing.

The Menwith Hill electronic surveillance base, which includes over 30 radomes, is widely believed to regularly intercept satellite communications. At Menwith Hill, the radome enclosures have a further use in preventing observers from deducing the direction of the antennas, and therefore which satellites are being targeted. The same point was also made with respect to the radomes of the ECHELON facilities. 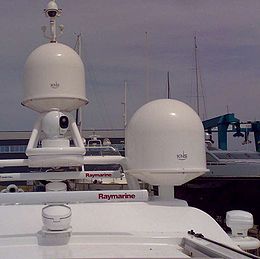 For maritime satellite communications service, radomes are widely used to protect dish antennas which are continually tracking fixed satellites while the ship experiences pitch, roll and yaw movements. Large cruise ships and oil tankers may have radomes over 3m in diameter covering antennas for broadband transmissions for television, voice, data, and the Internet, while recent developments allow similar services from smaller installations such as the 85 cm motorised dish used in the ASTRA2Connect Maritime Broadband system. Small private yachts may use radomes as small as 26 cm in diameter for voice and low-speed data.

An Active Electronically Scanned Array is a form of radar installation that has no moving parts as such and in ground based installations a radome is not necessary. An example of this is the "pyramid" which replaced the "tourist attraction" golfball-style radome installations at RAF Fylingdales.