Caracalla
This article is about the Roman Emperor. For the Lebanese dance company, see Caracalla Dance Theatre.

Caracalla (Latin: Marcus Aurelius Severus Antoninus Augustus;[1] 4 April 188 – 8 April 217), was Roman emperor from 209 to 217.[2] The eldest son of Septimius Severus, he ruled jointly with his younger brother Geta until he murdered the latter in 211. Caracalla is remembered as one of the most notorious and unpleasant of emperors because of the massacres and persecutions he authorized and instigated throughout the Empire.[3][4]

Caracalla's reign was also notable for the Constitutio Antoniniana (also called the Edict of Caracalla) , granting Roman citizenship to all freemen throughout the Roman Empire for the purpose of increasing tax revenue, according to historian Cassius Dio. He is also one of the emperors who commissioned a large public bath-house (thermae) in Rome. The remains of the Baths of Caracalla are still one of the major attractions of the Italian capital.

Caracalla, of mixed Punic–Roman–Berber[5][6] and Syrian descent,[7][8][9] was born Lucius Septimius Bassianus in Lugdunum, Gaul (now Lyon, France), the son of the later Emperor Septimius Severus and Julia Domna. At the age of seven, his name was changed to Marcus Aurelius Septimius Bassianus Antoninus to create a connection to the family of the philosopher emperor Marcus Aurelius. He was later given the nickname Caracalla, which referred to the Gallic hooded tunic he habitually wore and which he made fashionable.

His father died in 211 at Eboracum (now York) in northern Britain. Caracalla was present and was then proclaimed co-emperor with his brother Publius Septimius Antoninus Geta. Caracalla continued campaigning against the Caledonians the following season, but soon ended all military activity, as both brothers wanted to be sole ruler thus making relations between them increasingly strained as they tried to rule the Empire jointly (they even considered dividing the Empire in halves, but were persuaded not to do so by their mother).

Then in December AD 211 at a reconciliation meeting arranged by their mother Julia, Caracalla had Geta assassinated by members of the Praetorian Guard loyal to him, Geta died in his mother's arms. Caracalla then persecuted Geta's supporters and ordered a damnatio memoriae by the Senate against his brother.

Geta's image was simply removed from all coinage, paintings and statues, leaving a blank space next to Caracalla's. Among those killed were Caracalla's ex-wife, Fulvia Plautilla, and her brother and other members of the family of his former father-in-law Gaius Fulvius Plautianus. Plautianus had already been executed for alleged treachery against emperor Severus in 205.

Also, around the time of his accession he devalued the Roman currency. He decreased the silver purity of the denarius from 56.5% to 51.5%, the actual silver weight dropping from 1.81 grams to 1.66 grams - though the overall weight slightly increased. In 215 he also introduced the antoninianus, a "double denarius" weighing 5.1 grams and containing 2.6 grams of silver - a purity of 52%.[10]

In AD 213, Caracalla went north to the German frontier to deal with the Alamanni tribesmen who were causing trouble in the Agri Decumates. The Romans did defeat the Alamanni in battle near the river Main, but failed to win a decisive victory over them. After a peace agreement was brokered and a large bribe payment given to the invaders, the Senate conferred upon him the empty title of "Germanicus Maximus". The following year the emperor traveled to the East, to Syria and Egypt.

Gibbon in his work describes Caracalla as "the common enemy of mankind". He left the capital in AD 213, about a year after the murder of Geta, and spent the rest of his reign in the provinces, particularly those of the East. He kept the Senate and other wealthy families in check by forcing them to construct, at their own expense, palaces, theaters, and places of entertainment throughout the periphery. New and heavy taxes were levied against the bulk of the population, with additional fees and confiscations targeted at the wealthiest families.[11]

When the inhabitants of Alexandria heard Caracalla's claims that he had killed Geta in self-defense, they produced a satire mocking this as well as Caracalla's other pretensions. In AD 215 Caracalla savagely responded to this insult by slaughtering the deputation of leading citizens who had unsuspectingly assembled before the city to greet his arrival, and then unleashed his troops for several days of looting and plunder in Alexandria. According to historian Cassius Dio, over 20,000 people were killed.

During his reign as emperor, Caracalla raised the annual pay of an average legionary to 675 denarii and lavished many benefits on the army which he both feared and admired, as instructed by his father Septimius Severus who had told him on his deathbed to always mind the soldiers and ignore everyone else. Caracalla did manage to win the trust of the military with generous pay rises and popular gestures, like marching on foot among the ordinary soldiers, eating the same food, and even grinding his own flour with them.[12] With the soldiers, "He forgot even the proper dignity of his rank, encouraging their insolent familiarity," according to Gibbon.[11] "The vigour of the soldiers, instead of being confirmed by the severe discipline of the camps, melted away in the luxury of the cities."

His official portraiture marks a break with the detached images of the philosopher–emperors who preceded him: his close-cropped haircut is that of a soldier, his pugnacious scowl a realistic and threatening presence. This rugged soldier–emperor iconic archetype was adopted by most of the following emperors who depended on the support of the military to rule, like his eventual successor Maximinus Thrax.[13]

According to the historian Herodian, in AD 216, Caracalla tricked the Parthians into believing that he accepted a marriage and peace proposal, but then had the bride and guests slaughtered after the wedding celebrations. The thereafter ongoing conflict and skirmishes became known as the Parthian war of Caracalla.[14]

Seeking to secure his own legacy, Caracalla also commissioned one of Rome's last major architectural achievements, the Baths of Caracalla, the largest public baths ever built in ancient Rome. The main room of the baths was larger than St. Peter's Basilica, and could easily accommodate over 2,000 Roman citizens at one time. The bath house opened in 216, complete with libraries, private rooms and outdoor tracks. Internally it was lavishly decorated with gold-trimmed marble floors, columns, mosaics and colossal statuary.

The Constitutio Antoniniana (Latin: "Constitution [or Edict] of Antoninus") (also called Edict of Caracalla) was an edict issued in 212 by Caracalla which declared that all free men in the Roman Empire were to be given full Roman citizenship and all free women in the Empire were given the same rights as Roman women.

Before 212, for the most part only inhabitants of Italia held full Roman citizenship. Colonies of Romans established in other provinces, Romans (or their descendants) living in provinces, the inhabitants of various cities throughout the Empire, and small numbers of local nobles (such as kings of client countries) held full citizenship also. Provincials, on the other hand, were usually non-citizens, although some held the Latin Right.

The Roman Historian Cassius Dio contended that the sole motivation for the edict was a desire to increase state revenue.[15] At the time, aliens did not have to pay most taxes that were required of citizens, so although nominally Caracalla was elevating their legal status, he was more importantly expanding the Roman tax base. 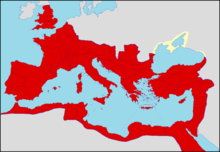 The Roman Empire during the reign of Caracalla.

While travelling from Edessa to continue the war with Parthia, he was assassinated while urinating at a roadside near Carrhae on April 8, AD 217, by Julius Martialis, an officer of his personal bodyguard. Herodian says that Martialis' brother had been executed a few days earlier by Caracalla on an unproven charge; Cassius Dio, on the other hand, says that Martialis was resentful at not being promoted to the rank of centurion. The escort of the emperor gave him privacy to relieve himself, and Martialis then ran forward and killed Caracalla with a single sword stroke. He immediately fled on horseback, but was in turn killed by a bodyguard archer.[citation needed]

Caracalla was succeeded by the Praetorian Guard Prefect, Macrinus.

According to Aurelius Victor in his Epitome de Caesaribus, the agnomen "Caracalla" refers to a Gallic cloak that Caracalla adopted as a personal fashion, which spread to his army and his court.[16] Cassius Dio[17] and the Historia Augusta[18] agree that his nickname was derived from his cloak, but does not mention its country of origin.

Geoffrey of Monmouth's legendary History of the Kings of Britain makes Caracalla a king of Britain, referring to him by his actual name "Bassianus", rather than the nickname Caracalla. In the story, after Severus's death the Romans wanted to make Geta king of Britain, but the Britons preferred Bassianus because he had a British mother. The two brothers fought a battle in which Geta was killed and Bassianus succeeded to the throne. He ruled until he was betrayed by his Pictish allies and overthrown by Carausius, who, according to Geoffrey, was a Briton, rather than the Menapian Gaul that he actually was.[19]