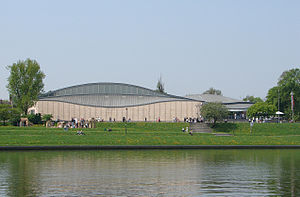 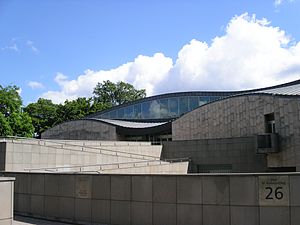 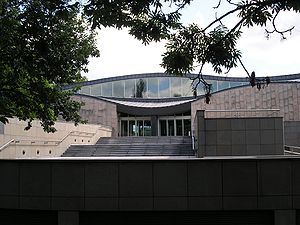 In 1920, Feliks Jasieński—critic, writer and collector of art, whose penname was "Manngha"—donated his collection of artworks connected with Japan to the National Museum in Kraków. After his death, the collection was not exhibited, one reason being the lack of space to arrange the 6500 items. The lone exception was an exhibition in Cloth Hall of Kraków in 1944, organised by the Germans, who occupied Poland at the time. A young Andrzej Wajda saw the exhibition and became fascinated by Japanese art.

In 1987, almost half a century later, Andrzej Wajda received a film award in Kyoto. He decided to donate the entire sum to the National Museum in Kraków to build a brand new building in which to exhibit the entire collection.

Andrzej Wajda was supported by local authorities, the City of Kraków, and the government of Japan with special help from Ambassador Nagao Hyodo. The East Japan Railway Workers' Union with president Akira Matsuzaki donated the equivalent of approximately $1MM U.S. to the Kyoto-Kraków Foundation created by Andrzej Wajda and friends.

The building was designed by Arata Isozaki (celebrated Japanese architect), who donated the design to the Foundation. Krzysztof Ingarden, J.Ewy and JET Atelier were collaborating architects on the Polish side. The exterior features of this modern building—the roof resembles the sea in many old Japanese paintings—echo both the museum's surroundings and some of the art housed within; the garden next to the building is a gift of the City of Kyoto. It is a contemporary structure that both complements and contrasts with the ancient art of Japan, and contains both exhibition and conference rooms. In addition to its permanent exhibitions, the Centre organises temporary ones—mostly relating to Japanese art, culture and technology. In addition, the Centre organises courses in tea brewing, Ikebana, and Japanese language. Manggha is the headquarters of the Polish Bonsai Club.

In 1997, Manggha received a Special Award of the Japanese Foundation.

On July 11, 2002, Manggha was visited by Emperor Akihito and his wife Michiko. On the request of the Emperor, an exhibition of selected woodcuts of the great Japanese artist Utagawa Hiroshige had been prepared. The Emperor and his wife donated some audio-visual equipment to the Centre (for the school of Japanese language).

In a 2006 architectural competition, the Centre was chosen as one of twenty most interesting examples of architecture in Poland built after 1989. - "Polska. Ikony architektury" ("Poland. Icons of Architecture").