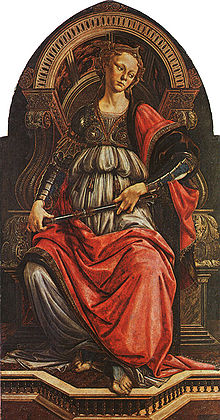 Courage (also bravery, boldness, fearlessness, mettle, fortitude, or intrepidity) is the ability to confront fear, pain, danger, uncertainty, or intimidation. "Physical courage" is courage in the face of physical pain, hardship, death, or threat of death, while "moral courage" is the ability to act rightly in the face of popular opposition, shame, scandal, or discouragement.

As a [desirable] quality, courage is discussed broadly in Aristotle's Nicomachean Ethics, where its vice of shortage is cowardice and its vice of excess is recklessness.[1] 'live life not without fear, but with gallantry against it' : Christian L J Silver

Or this insight from Winston Churchill:

Courage is rightly esteemed the first of human qualities ... because it is the quality that guarantees all others.

In both Catholicism and Anglicanism, courage is also one of the seven gifts of the Holy Spirit.

The Tao Te Ching states that courage is derived from love ("慈 loving 故 causes 能 ability 勇 brave") and explains: "One of courage, with audacity, will die. One of courage, but gentle, spares death. From these two kinds of courage arise harm and benefit."[3][4]

Courage (shauriya) and Patience (dhairya) appear as the first two of ten characteristics (lakshana) of dharma in the Hindu Manusmruti, besides forgiveness (kshama), tolerance (dama), honesty (asthaya), physical restraint (indriya nigraha), cleanliness (shouchya), perceptiveness (dhi), knowledge (vidhya), truthfulness (satya), and control of anger (akrodh). Islamic beliefs also present courage and self-control as a key factor in facing the Devil and in some cases Jihad to a lesser extent; many believe this because of the courage (through peace and patience) the Prophets of the past displayed against people who despised them for their beliefs.

Søren Kierkegaard opposed courage to angst, while Paul Tillich opposed an existential courage to be to non-being, fundamentally equating it with religion:

"Courage is the self-affirmation of being in spite of the fact of non-being. It is the act of the individual self in taking the anxiety of non-being upon itself by affirming itself ... in the anxiety of guilt and condemnation. ... every courage to be has openly or covertly a religious root. For religion is the state of being grasped by the power of being itself."[5]

J.R.R. Tolkien identified in his 1936 lecture "Beowulf: The Monsters and the Critics" a "Northern 'theory of courage'"—the heroic or "virtuous pagan" insistence to do the right thing even in the face of certain defeat without promise of reward or salvation:

Virtuous pagan heroism or courage in this sense is "trusting in your own strength," as observed by Jacob Grimm in his Teutonic Mythology,

Civil courage (sometimes also referred to as "Social courage") is defined by many different standards. In general, the term is usually referred to when civilians stand up against something that is deemed unjust and evil, knowing that the consequences of their action might lead to their death, injury or some other form of significant harm.[citation needed]

In some countries (e.g. France[9] and Germany)[10] civil courage (Duty to rescue) is enforced by law under certain circumstances; this generally excludes assistance that would endanger the person who is offering it.

Its accompanying animal is the lion. Often, Fortitude is depicted as having tamed the ferocious lion. Cf. e.g. the Tarot trump called Strength. It is sometimes seen in the Catholic Church as a depiction of Christ's triumph over sin (see Revelation 5:5). It also is a symbol in some cultures as a savior of the people who live in a community with sin and corruption.

As a strength in psychology

From the end of the twentieth century, courage has been a concept generating interest in the field of psychology. In 2004, Christopher Peterson and Martin Seligman’s book, Character Strengths and Virtues proposed a uniform way of classifying positive traits that highlight the elements of humanity that uplift humanity, Courage being among the key virtues. In addition, Seligman and Peterson founded the Virtues in Action (VIA) Institute and created the VIA survey which hope to bring this uniform categorization of human strengths to the masses. The VIA classifies human strengths in six, broad categories: Wisdom and Knowledge, Courage, Humanity, Justice, Temperance, Transcendence. Courage is broken down into four main subcategories: Bravery, Perseverance, Honesty, and Zest.

Bravery is the subcategory most people generally associate with Courage.[11] It is defined as “the ability to stand up for what is right in difficult situations.”[11] As opposed to less sophisticated definitions that simply categorize bravery as fearlessness or acting when an observer would be afraid.[12] There are several forms of this bravery. Physical bravery involves acting in spite of possible harm to one’s body. Moral bravery involves acting in a way that enhances what one believes to be good in spite of social disapproval and possible backlash. A third, theoretically newer, definition of bravery is psychological bravery which involves things such as overcoming one’s own addictive habits, irrational anxieties, and harmful dependent relationships. Psychological bravery means acting against one’s own natural inclinations and facing fears which might not have any societal moral implications.[13] Bravery works well as a virtue in the VIA classification system because it is highly regarded across cultures and has obvious benefits for those surrounded by brave people. Possible problems with viewing bravery as a classifiable human strength is that it could be argued that bravery is not trait-like since it only comes out under certain circumstances.[11] The counterargument to this claim is that bravery is trait-like in the same way creativity is considered a trait; both appear only in certain situations.[11] The VIA claims that it is a positive psychological trait that can be found and cultivated in certain individuals.

Perseverance falls under the larger category of courage because it often involves continuing along a path in the midst of and after having faced opposition and perhaps failure. Perseverance involves the ability to seek a goal in spite of obstacles and has been shown in human and animal studies to be a lasting trait with individual differences.[14] In order to persevere at a task, a person must be able to suppress desires to give up and pursue an easier task, a metacognitive understanding that the ends justify the persevering means. But beyond meta cognition, a person high in perseverance is able to overcome low self-esteem and estimations that one cannot do the task as well as discouragement from peers and the desire to present oneself well.[15] As a categorical psychological strength, perseverance is regarded highly by society as opposed to laziness. However, its one weakness as an entry on the VIA as noted by Peterson and Seligman is that it may not be discernible from other human strengths and virtues. It especially can be seen as overlapping with self-control. However Peterson and Seligman maintain its distinctiveness, pointing out that perseverance “is explicitly shown across time, whereas control and regulation of oneself have a more here-and-now flavor”.[11] More research needs to be done in this area to empirically show that perseverance belongs in its own distinct category.

As defined by positive psychologists, honesty and authenticity as a subset of courage means more than simply telling the truth. It involves integrity in all areas of one’s life and the ability to be true to oneself and one’s role in the world across circumstances.[11] Though perhaps one would not immediately associate honesty with courage, there are obvious situations in life where to be honest and authentic requires a great deal of strength in the midst of fear. The positive view societies have of honesty can be seen from the fact that it is something people try to develop in young children and adolescents.[11] While all people seem to grow in their understanding of the moral importance of honest and integrity as they grow older,[16] there are certain individuals who seem to especially excel in this human strength. This trait is important in many areas of life, so much so that many measurements have been developed in an effort to identify especially honest individuals. These measurements test both overt honesty, the thoughts one has about blatant dishonesty such as stealing, and covert honesty, which is very similar to conscientiousness and dependability.[11] Of all the subcategories under courage in the VIA, Honesty shows the most promise as a distinct, well defined area of classification.[11]

Of the four categories involved in courage, zest or vitality, is the one that has the most weaknesses as a classification. It is defined as, “feeling alive, being full of zest, and displaying enthusiasm for any and all activities”.[11] This is a category that is influenced not only by subjective psychological factors, but also objective factors affecting one’s physical well-being such as chronic pain.[17] The reason Peterson and Seligman group Zest together with other courageous virtues is that Zest most often comes forth as a character strength in the midst of trying circumstances. For example, it has been shown that people’s subjective perception of their situation when faced with chronic pain, judging their perceived ability to handle the situation and their general positivity, is able to influence their well-being. This zest can be shown to be trait-like across situations.[17]