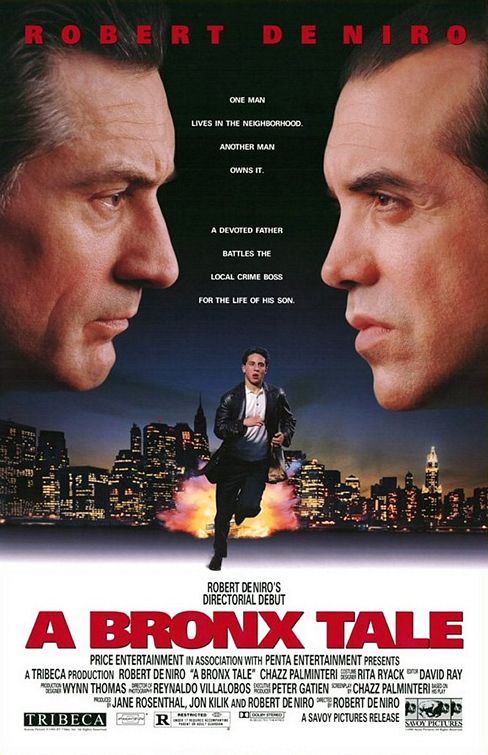 "A Bronx Tale" is a 1993 film set in New York City during the turbulent era of the 1960s. It was the directorial debut of , and follows a young man as his path in life is guided by two father figures, played by De Niro and . It also includes a brief appearance by . It was written by Palminteri, based partially upon his childhood.

The movie opens in with Lorenzo Anello's () son Calogero () witnessing a murder committed by the local boss, Sonny (). When Calogero chooses to keep quiet when questioned by police officers, Sonny takes a liking to him. Calogero starts visiting Sonny and his posse almost every day in the bar downstairs, much to the dismay of his father, a hard-working bus driver struggling to make ends meet. Eight years later, in 1968, Calogero (now played by ) has grown into a young man. He will eventually have to make the choice between his two mentors. He also pursues an relationship with a Black girl named Jane Williams (), and he has to cope with this while being in the company of friends who coincidentally attack the girl's brother and his friends, and who later plan to raid a Black neighborhood ().

The film contains several violent scenes, including a savage beating of a by the Mafia, and Calogero's friends' tragically botched incursion into the Black neighborhood.

Palminteri adapted the screenplay from his one-man show of the same name. The show had successful runs in and . Palminteri would not sell the rights to his story unless he could write the screenplay and was guaranteed the role of Sonny. At one point he was offered one million dollars, but refused because his conditions were not met. Later, De Niro saw the show and approached Palminteri. He said he knew about Palminteri refusing to sell the rights. For the rights he told Palminteri he would act in the movie and meet Palminteri's conditions if he could direct. De Niro said he was good to his word with only a handshake from Palminteri.

Palminteri based the character of Calogero on himself; his real first name is Calogero.