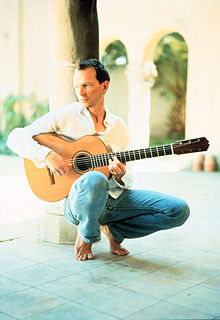 Ottmar Liebert (born 1959)[1] is a German-born composer and guitarist, born to a Chinese-German father and a Hungarian mother. As a child, he spent most of his time traveling Europe and Asia with his family. Ottmar leads an ensemble called Luna Negra ("Black Moon"), which has gained popularity performing as a touring band and recording music albums in a "Nouveau Flamenco" style.

Ottmar Liebert has recorded with Luna Negra since 1990. Personnel has changed regularly since then, with the only constant being bassist Jon Gagan.

Ottmar has been nominated five-times for a Grammy award. Ottmar first pursued his rock and roll aspirations in his native Germany and then in Boston where he played in the alternative band RED with his brother Stefan. Ottmar then moved to Santa Fe, New Mexico. By 1989, he had founded the first "Luna Negra" band. The ground-breaking album Nouveau Flamenco began life as a self-produced local release called Marita: Shadows and Storms, copies of which local artist Frank Howell distributed in his art galleries. When the record found its way to radio stations and began generating a response among listeners, Higher Octave Music picked it up and released a re-mastered version. Since 1990, Ottmar Liebert has released a total of 25 albums including live releases, Christmas CDs, 15 CDs of original music, a DVD and remixes. He has received 38 Gold and Platinum certifications in the USA as well as certifications in Canada, Australia, and New Zealand. His debut album sold double-platinum and has become one of the best-selling guitar albums of all time. In May 2006 Ottmar was ordained as a Zen Monk by Dennis Genpo Merzel, at the Kanzeon Zen Center in Salt Lake City, Utah.[citation needed][who?]