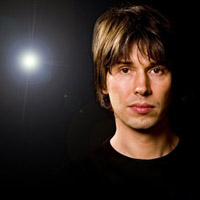 tudies and career in music

In 1986 Cox was invited to join a local rock band called Dare as keyboard player. They recorded 2 albums and toured worldwide with , , Europe and others. Dare broke up in 1992 and Cox left music to study physics.

After attending Hulme Grammar School in Oldham he studied Physics at the where in 1993, whilst still studying, he joined , ["Courier Mail", [http://www.news.com.au/couriermail/story/0,23739,20062796-3102,00.html "Rock star's new frontier"] Dead link|date=September 2008, 9 August 2006, unable to retrieve on 6 September 2008] , a band with three top-ten singles on the , including a number one hit, election anthem "". [everyHit.com, " [http://www.everyhit.co.uk/ UK top 40 hit database] " (search result for "D:Ream"), done 6 September 2008] By the time D:Ream disbanded in 1997, Cox had earned a first class honours degree in physics from the University of Manchester, where he was later awarded a PhD in high energy particle physics, based on his thesis drawn from work he did for the H1 experiment at the particle accelerator at the laboratory in Hamburg. [apolloschildren.com, " [http://www.apolloschildren.com:16080/brian/ Professor Brian Cox] " (with downloadable postscript file), retrieved 6 September 2008]

Cox has received many awards for his efforts to publicise science. In 2002 he was elected an International Fellow of the and in 2006 Cox received the Lord Kelvin Award for this work. A frequent lecturer, he was keynote speaker at the Australian Science Festival in 2006.

Cox is also known for his involvement in science programmes for radio and television, including "In Einstein's Shadow", [bbc.co.uk, " [http://www.bbc.co.uk/radio4/science/ineinsteinsshadow.shtml In Einstein's shadow] ", January 2005, retrieved 6 September 2008] the BBC "Horizon" series [Sue Rider Management, " [http://www.sueridermanagement.co.uk/presenters/BrianCox/briancox.htm Professor Brian Cox] ", retrieved 6 September 2008] ("Large Hadron Collider and the Big Bang" and "What On Earth Is Wrong With Gravity") and for voiceovers on the BBC's revision programmes. Cox was the science adviser for the sci-fi movie "Sunshine" and was featured on the Discovery Channel special "Megaworld: Switzerland". He also gives regular lectures on the LHC.