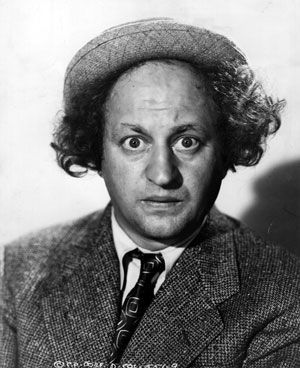 Larry was born to a Jewish family as Louis Feinberg in , at the corner of 3rd and South Streets. His father, Joseph Feinberg, and mother, Fanny Lieberman, owned a watch repair and jewelry shop. The building there is now a restaurant which is called "the birth place of Larry Fine" but is not actually where he was born. The upstairs houses a small Stooge museum. When Larry was a child he burned his arm with some acid that his father used to test whether or not was real. Mistaking it for a cool drink Larry had the bottle to his lips when his father noticed and slapped it from his hand, splashing his forearm with acid. Later Larry received training to help strengthen his damaged muscles and this talent would be observed in many of the Stooges' films. In scenes where all three are playing fiddles, only Larry is actually playing his instrument; the others are pantomiming. To further strengthen his arm, Larry took up boxing as a teenager and fought and won one professional bout. His career as a pugilist was stopped by his father, who was opposed to Larry's fighting in public.ref|1 His experience in boxing, however, no doubt served him well in his later career as a Stooge.

As Larry Fine, he first performed as a in at an early age. In 1925, he met and . Howard and his brother Shemp had been working as audience stooges for Healy. Shemp left soon after to attempt a solo career and was in turn replaced by another brother, Curly. Larry's trademark bushy hair came out, according to rumor, from his first meeting with Healy, in which he had just wet his hair in a basin, and as they talked, it dried oddly. Healy told him to keep the zany hairstyle and, according to a 1973 radio interview with Moe:

Beginning in 1933, The Three Stooges made 190 short films, and several features, with their most prolific period featuring the characters of Larry, Moe and Curly. Their career with Healy was marked by disputes over pay, film contracts, and Healy's drinking and abuse. They left Healy for good in 1934.

In many of the Stooge shorts, Fine did more reacting than acting, staying in the background and providing the voice of reason between the extreme characterizations of Moe and Curly. (in the short "", Larry was pressed into service to replace an ailing Curly, who was unable to perform as the lead stooge.) After Curly left the act, Larry shared screen time equally with his two partners.

But in the earliest Stooge two-reelers (and occasionally the later ones) Larry indulges in utterly nutty behavior. He would liven up a scene by improvising some random remark or ridiculous action. In the hospital spoof "Men in Black", Larry wields a and chortles, "Let's plug him... and see if he's ripe!" In "", a tense courtroom scene is interrupted by Larry breaking into a wild . Of course, after each of his outbursts, Moe would gruffly discipline him. It is said that Larry had developed a on one side of his face from being slapped innumerable times by Moe over the years.

Larry's on-screen goofiness was an extension of his own relaxed personality. Director recalled, "Larry was a nut. He was the kind of guy who always said anything. He was a yapper." Writer-director remembered that Larry's suggestions for the scripts were often "flaky," but would occasionally contain a good comic idea.

Offstage, Larry was a social butterfly. He liked a good time and surrounded himself with friends. Larry and his wife, Mabel, loved having parties and every threw lavish midnight suppers. Larry was what some friends have called a "yes man," since he was always so agreeable, no matter what the circumstances.

Larry's devil-may-care personality carried over to the world of finance. He was a terrible businessman and spent his money as soon as he earned it. He would either gamble it away at the track or at high-stakes gin rummy games. In an interview, Fine even admitted that he often gave money to actors and friends who needed help and never asked to be reimbursed. and director remember that because of his free spending, Larry was almost forced into bankruptcy when Columbia terminated the Three Stooges comedies in December 1957.

Because of his profligate ways and his wife's dislike for housekeeping, Larry and his family lived in hotels — first in the President Hotel in , where his daughter Phyllis was raised, then the Knickerbocker Hotel in Hollywood. Not until the late 1940s did Larry buy a wonderful Mediterranean home in the Los Feliz area of .

The Stooges became a big hit in 1959 on , when Columbia Pictures released a batch of the trio's films. The popularity brought the Stooges to a new audience and revitalized their careers. It also brought the Fines a steady source of income, which they sorely needed.

On May 30, 1967, Fine's wife, Mabel, died of a sudden , a blow that abruptly ended 40 years of marriage. Her death had come nearly six years after another family tragedy: the death of their only son, John, in a car accident on , . (The couple's daughter, Phyllis, died of cancer at the age of 60 in 1988. John's wife, Christy (Kraus), died on , , after a lengthy illness.)

Returning to work, Fine and the Stooges were working on a new TV series entitled "" in January, 1970, when Larry suffered a debilitating that paralyzed the left side of his body. He eventually moved to the Motion Picture House, an industry retirement community in Woodland Hills, where he spent his remaining years.

Fine was confined to a during the last five years of his life. Like , Fine suffered several additional strokes before his death on , . He was interred at Glendale's, Forest Lawn Memorial Park in the Freedom Mausoleum, Sanctuary of Liberation. [ [http://www.findagrave.com/cgi-bin/fg.cgi?page=gr&GSln=fine&GSfn=larry&GSbyrel=all&GSdyrel=all&GSob=n&GRid=338&/ findagrave.com] ]

He is sometimes erroneously listed as the father of sportscaster , who is in fact the son of Jack Wolf, one of several other "stooges" who played in 's act at one time or another. He is, however, the father-in-law of actor and television personality , best known for hosting Stooges shorts on for many years.

* The Three Stooges have a star on the for their contributions to Motion Pictures, at 1560 Vine Street in Hollywood.
* In the 2000 TV movie (a labor of love by executive producer ), Larry Fine was played by .
*In a 2004 "New Yorker" feature on the 's attempt to write a script for a new Three Stooges movie, offered his theory of Stooge appreciation: “Growing up, first you watched Curly, then Moe, and then your eyes got to Larry. He’s the reactor, the most vulnerable. Five to fourteen, Curly; fourteen to twenty-one, Moe. Anyone out of college, if you’re not looking at Larry, you don’t have a good brain.”
*On May 18, 2006, a mural was placed on the corner of 3rd and South Streets in , where Larry Fine was born. Currently, the mural of Larry Fine stands over Jon's Bar and Grill, and a sign reads, "Birthplace of Larry Fine."

* Mel Gibson is perhaps the most famous avid Three Stooges fan, not only producing the 2000 TV movie, but "sneaking" them into other areas of his work as well (e.g. imitating Curly in "Lethal Weapon").
* The voice for Stimpy of "" fame (voiced by Billy West) is based heavily on Fine's, though aside from the characters' generally sunny demeanor, there are few other similarities between the characters. Years before "Ren & Stimpy", West frequently impersonated Larry Fine on the radio program "", as well as many appearances in the early 1990s on . West's most famous Larry Fine routine on the Stern show was "Woodstock Minute," a hilarious pseudo-documentary that claimed that Fine inspired to light his guitar on fire while on stage, and also sang background with on "Judy Blue Eyes."

* An episode of "" was written as a Three Stooges homage, with Brain taking on the role of Moe and Pinky taking on the role of Curly. To accommodate the fact that the series only had two characters, a third mouse (named simply "Larry") was introduced without explanation. The character was edited into the beginning sequence whenever not too difficult to do so, and sang along with the beginning theme (adding the phrase "and Larry" after each instance of "Pinky and the Brain")

* On "", comedian impersonated Larry more than once, including a fake TV advertisement for "Give "em Hell, Larry!" a parody of the theatrical , "", about U.S. President . In the sketch, Larry sits alone behind a desk and rattles off his many Stooge catch-phrases ("What's the big idea?" "I'm sorry. Moe, it was an accident!") with no one to respond to him.

* An episode of "" showed three stone age cats, all physically based on each Stooge. In the cartoon, the cat resembling Larry had the infamous Larry hairstyle.

* In an episode of "", George discovers that a woman Kramer set him up with is bald. When Elaine suggests that the woman is bald by choice, George refuses to believe it, declaring that when someone goes into a beauty parlor, "they don't say, 'Give me the Larry Fine.'"