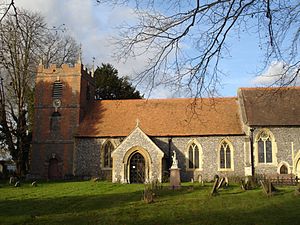 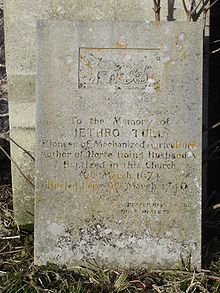 St Bartholomew's Church is the redundant Church of England parish church of Basildon in the English county of Berkshire. It is located in the hamlet of Lower Basildon and is now owned by the Churches Conservation Trust.[1] The church has been designated by English Heritage as a Grade I listed building.[2]

It was built in the late 13th century and is constructed of flint with stone dressings with an old tiled roof. The west tower of 1734 is of grey brick with red dressings and is in three stages. Below the louvred bell stage, containing four bells, is a clock on the south side. The church plan consists of nave, chancel, south porch and north aisle. The gabled porch is 19th century, as are the lean-to north aisle and chancel roof of 1876. In the chancel wall is a 14th century chest tomb, reused as a monument to Sir Francis Sykes who died in 1804. There is a 15th century font. [3]

The churchyard is notable as the resting place of Jethro Tull, the 18th century agriculturalist, whose modern gravestone can be seen there. He died in 1741 but according to his gravestone he was buried on March 9, 1740. This apparent confusion is due to the burial date being an Old Style date.