Margaret Hamilton (December 9, 1902 – May 16, 1985) was an American film actress known for her portrayal of the Wicked Witch of the West in the 1939 film The Wizard of Oz.[1] A former schoolteacher, she worked as a character actor in films for seven years before she was offered the role that defined her public image.

In later years, Hamilton made frequent cameo appearances on television sitcoms and commercials. She also gained recognition for her work as an advocate of causes designed to benefit children and animals, and retained a lifelong commitment to public education.

Hamilton was born to Walter J. Hamilton and his wife, Jennie (Adams), in Cleveland, Ohio and was the youngest of four children. She later attended Hathaway Brown School in Shaker Heights, Ohio. Drawn to the theater at an early age, Hamilton made her stage debut in 1923. Hamilton also practiced her craft doing children's theater while she was a Junior League of Cleveland member. She later moved to Painesville, Ohio.

Before she turned to acting exclusively, her parents insisted that Hamilton attend Wheelock College in Boston and then become a kindergarten teacher. Over the years, her students included future actors William Windom and Jim Backus.

Hamilton's unlikely career as a film actress was driven by the very qualities that placed her in stark contrast to the stereotypical Hollywood glamour girl. Her image was that of a New England spinster, extremely pragmatic and impatient with all manner of "tomfoolery". Hamilton's plain looks helped to bring steady work as a character actor. She made her screen debut in 1933 in Another Language. Hamilton went on to appear in These Three (1936), Saratoga, You Only Live Once, When's Your Birthday?, Nothing Sacred (all 1937), The Adventures of Tom Sawyer (1938), and My Little Chickadee (1940). She strove to work as much as possible to support herself and her son; she never put herself under contract to any one studio and priced her services at $1000 a week.[2]

Hamilton co-starred opposite Buster Keaton and Richard Cromwell, in a 1940s spoof of the long-running local melodrama The Drunkard entitled The Villain Still Pursued Her. Later in the decade, she was in a now-forgotten film noir from one of the "poverty row" studios, entitled Bungalow 13 (1948), in which she again co-starred opposite Cromwell, although that film did nothing for either of their careers.[citation needed]

Hamilton's crisp voice with rapid but clear enunciation was another trademark. She appeared regularly in supporting roles in films until the early 1950s, and sporadically thereafter. She made an uncredited nearly 10-minute performance in Joseph L. Mankiewicz's People Will Talk from 1951 playing the part of Sarah Pickett opposite Hume Cronyn's Dr. Elwell.[citation needed]

In 1960, producer/director William Castle cast Hamilton as the maid in his 13 Ghosts spookfest. Throughout the film she plays it straight when 12-year-old lead Charles Herbert's taunts about her being a witch, including one scene when she has a broom in her hand.

The Wizard of Oz 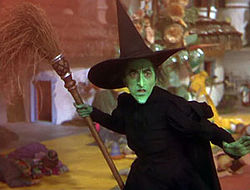 Hamilton as The Wicked Witch of the West

In 1939, Hamilton played the role of the Wicked Witch of the West, opposite Judy Garland's Dorothy Gale in The Wizard of Oz, creating not only her most famous role, but also one of the screen's most memorable villains. Hamilton was chosen when the more traditionally attractive Gale Sondergaard refused to wear makeup designed to make her appear ugly.

Hamilton suffered a second-degree burn on her face and a third-degree burn on her hand during a second take of her fiery exit from Munchkinland, in which the trap door's drop was delayed to eliminate the brief glimpse of it seen in the final edit. Hamilton had to recuperate in a hospital and at home for six weeks after the accident before returning to the set to complete her work on the now-classic film, and refused to have anything to do with fire for the rest of the filming. After she recuperated, she said, "I won't sue, because I know how this business works, and I would never work again. I will return to work on one condition - no more fireworks!" Judy Garland had visited Hamilton while she recuperated at home.[3] Studio executives cut some of Margaret's most wicked scenes, worrying that said scenes would frighten children. Whatever ill-will Hamilton may have felt toward the role quickly disintegrated; later on in life, she would comment on the role of the witch in a light-hearted fashion. For an interview, she joked:

"I was in a need of money at the time, I had done about six pictures for MGM at the time and my agent called. I said, 'Yes?' and he said 'Maggie, they want you to play a part on the Wizard.' I said to myself, 'Oh Boy, The Wizard of Oz! That has been my favorite book since I was four.' And I asked him what part, and he said 'The Witch' and I said 'The Witch?!' and he said 'What else?'" (Hamilton presented this as the punchline to the joke.) [DVD commentary track]

Hamilton, often asked about her experiences on the set of The Wizard of Oz," said she sometimes worried about the effect that her monstrous film role had on children. In real life, Hamilton deeply loved children and gave to charitable organizations. She often remarked about children coming up to her and asking her why she had been so mean to poor Dorothy. She appeared on an episode of Mister Rogers' Neighborhood, where she explained to children that she was only playing a role and showed how make-up transformed her into the witch. She also made personal appearances, and Hamilton described children's usual reaction to her portrayal of the Witch:

"Almost always they want me to laugh like the Witch. And sometimes when I go to schools, if we're in an auditorium, I'll do it. And there's always a funny reaction, like Ye gods, they wish they hadn't asked. They're scared. They're really scared for a second. Even adolescents. I guess for a minute they get the feeling they got when they watched the picture. They like to hear it but they don't like to hear it. And then they go, 'Ohhhhhhhhhh.'... The picture made a terrible impression of some kind on them, sometimes a ghastly impression, but most of them got over it, I guess... Because when I talk like the Witch and when I laugh, there is a hesitation, and then they clap. They're clapping at hearing the sound again."[4]

Hamilton played two roles in the famous film: Almira Gulch and The Wicked Witch of the West. Only co-star Frank Morgan played more roles in the film (5). However, Hamilton and Morgan never appeared on screen together.

In the 1940s and 1950s, Hamilton had a long-running role on the radio series Ethel and Albert (aka "The Couple Next Door") in which she played the lovable, scattered Aunt Eva (name later changed to Aunt Effie). During the 1960s and 1970s, Hamilton appeared regularly on television. She did a stint as one of the What's My Line? Mystery Guests on the popular Sunday Night CBS-TV program. She reprised the image of Almira Gulch from The Wizard of Oz for her role as Morticia Addams' mother Hester (Granny) Frump in The Addams Family.(She was offered the role of Grandmama but turned it down[citation needed].)

During the 1960s she was a regular on the CBS soap opera, The Secret Storm, playing the role of Grace Tyrell's (Marjorie Gateson) beloved housekeeper, "Katie." In the early 1970s, she joined the cast of another CBS soap, As the World Turns, playing "Miss Peterson," affectionately called "Pete" by her millionaire boss, "Simon Gilbey" (Jerry Lacy.) She had a small role in the made-for-TV film The Night Strangler (1973) and appeared as a befuddled neighbor on Sigmund and the Sea Monsters. In the 1976 Paul Lynde Halloween Special, she portrayed Paul's housekeeper of 15 years and reprised her role as the Wicked Witch of the West, as well as introducing Paul to the rock group KISS. She would reprise her role as the Wicked Witch of the West in an episode of Sesame Street, but after complaints from parents of terrified children, it has not been seen since 1976. http://muppet.wikia.com/wiki/Episode_0847

She also appeared as herself in an episode of Mister Rogers' Neighborhood and continued acting regularly until 1982. Her last role was a guest appearance as a veteran journalist on an episode of Lou Grant.

Throughout the 1970s, Hamilton lived in New York City's Gramercy Park neighborhood and appeared on local (and some national) public service announcements (PSAs) for organizations promoting the welfare of pets. Her most visible appearances during this period were as general store owner Cora, in a national series of television commercials for Maxwell House coffee ("I think it tastes best.").

Hamilton married Paul Boynton Meserve on June 13, 1931, and made her debut on the New York stage the following year. While her acting career developed, her marriage became troubled, and the couple divorced in 1938. She would not marry again.[5] They had one son, Hamilton Wadsworth Meserve (born 1936), whom she raised on her own. She had three grandchildren: Christopher, Scott, and Margaret.

Hamilton's early experience as a teacher fueled a lifelong interest in educational issues. Hamilton served on the Beverly Hills Board of Education between 1948 to 1951, long after her success in films. She also taught Sunday school in the 1950s.

She lived in New York City for most of her adult life. Her Gramercy Park apartment building also boasted James Cagney and Jonathan Frid as tenants. She later moved to Millbrook, NY. Hamilton died in her sleep following a heart attack on May 16, 1985, in Salisbury, Connecticut, at the age of 82.[1] She was cremated at Poughkeepsie Rural Cemetery and her ashes were scattered on Cape Island, Maine.

Hamilton's line from The Wizard of Oz - "I'll get you, my pretty . . . and your little dog, too!" - was ranked 99th in the 2005 American Film Institute survey of the most memorable movie quotes. Her son, interviewed for the 2005 DVD edition of the film, commented that Hamilton enjoyed the line so much, she sometimes used it in her real life.