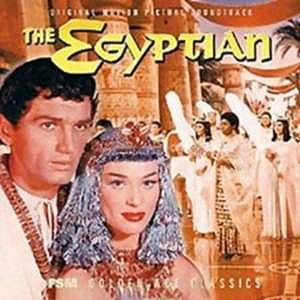 "The Egyptian" is a 1954 made in Cinemascope by , directed by and produced by . It is based on 's novel and the was adapted by and . Leading roles were played by (Meryt), (Horemheb), (Baketamon), Michael Wilding (Akhnaton), (Sinuhe), (Nefer), (Kaptah) and (Thoth). Cinematographer was nominated for an Oscar in 1955.

In 18th dynasty Egypt, Sinuhe () is an elderly man in exile on the shores of the Red Sea, writing the story of his life. He says he has always been alone, but has had a long, full life. Cast adrift as a baby in a reed boat on the Nile, he was adopted by a middle-aged couple in the city of Thebes. His adoptive father Senmut was a physician who served the poor. As a young man, Sinuhe graduates from the School of Life and is respected as a brilliant physician by his classmates, including his best friend Horemheb (), the son of a cheese-maker, who is planning an army career.

Sinuhe wants to work for the poor like his father, but has a hard time finding clients. He is approached by Kaptah () who offers to become his servant and garner him some publicity. Another friend of Sinuhe's is Merit (), a quiet, shy tavern-maid, who is secretly in love with him.

When Pharaoh dies, the nation goes into mourning. Horemheb and Sinuhe stay up late at Merit's tavern drinking and carousing. Horemheb was refused an appointment to the Royal Guard because he is of lowly birth. Horemheb goes out into the desert on a lion hunt and invites Sinuhe along. They encounter a white-clad young man engrossed in prayer. He recites the first lines of a poem honoring the sungod before falling into an epileptic seizure, which Sinuhe recognizes as "the holy sickness" and knows how to help. The young man turns out to be the new Pharaoh (). Grateful, he asks that Sinuhe remain on call in case anyone in the royal family falls ill; and he assigns Horemheb to the Royal Guard. Sinuhe is summoned by Akhnaton's sister, Princess Baketamon () to examine Queen Mother Taia () who asks him some strange questions before dismissing him.

Sinuhe and Horemheb attend a party thrown by courtesan Nefer (), with whom Sinuhe rapidly becomes infatuated. Learning that she's fond of gifts, he gives her things of increasing value in hopes of impressing her. He even gives her the deed to his parents' house, and the money that would have gone for their embalming and burial, which the Egyptians believe is crucial for the . She throws him out, and he returns home to find his parents have committed suicide. Devastated, he takes the bodies to the House of the Dead and offers to work there to pay for their embalming. He then buries them in the Valley of the Kings, so they can share in the wealth of the Pharaohs.

Merit finds him there and warns him not to return to Thebes. Because he was in the House of the Dead anonymously and worked there several months, he was unavailable when one of the princesses took ill, and she has died. Akhnaton, mad with grief, has condemned Sinuhe to exile. Sinuhe realizes that Merit has loved him all along, and they share a desperate passion before he leaves with Kaptah.

At first a penniless beggar in foreign lands, Sinuhe begins to practice medicine again and soon gains an excellent reputation. Called to treat the king of the Hittites, he asks in payment only a Hittite sword of black metal. Returning to Egypt and deliberately getting arrested, he is brought before Horemheb, who is now the supreme commander of the army. He shows how the sword can cut through the lighter swords of the Egyptians; he warns that the Hittites plan to attack Egypt and are forging thousands of these weapons. The black metal is .

Horemheb takes Sinuhe to Akhnaton's temple where the peace-loving Pharaoh and his family worship , the One God. Akhnaton understands about the Hittites but won't do anything, believing that peace is the only way. Horemheb, frustrated, explains to Sinuhe what's been going on in Egypt. Economic instability has caused increased criminal activity, riots and violence in the streets. Pharaoh is disengaged and oblivious, but the priests of the Old Gods are even worse; they've been spreading rumors and fomenting the riots. Many other people, especially the poor and working-class, worship , the One God, as Akhnaton does. Committed to peace and brotherhood, they wear the , which is repeatedly described as "the cross of life".

Sinuhe returns to his old neighborhood and finds that Merit, now an Aton worshipper, has bought his father's house and lives in it with her son Thoth (), whom she says is adopted, but Sinuhe realizes this is his own child and offers to be Merit's husband.

Summoned to court by Queen , Sinuhe examines Akhnaton and believes him to be insane. The priests of the Old Gods, led by Mikere (), demand that Sinuhe put Akhnaton out of the way so Horemheb can be made Pharaoh by popular acclaim. Sinuhe refuses and storms out. Baketamon confronts him, reminding him of the day he examined Taia. From the information Sinuhe gave her in answer to her bizarre questions, Taia concluded that he was the first-born of by the woman who was the major Royal Wife at that time. Determined to have the credit for giving Amenhotep his first son, Taia stole the baby and put it in a reed boat on the Nile -- where it was found and adopted by Senmut.

Baketamon says Sinuhe has the right to rule Egypt. As the Throne Princess (who must marry whoever is Pharoah), she'll be happy to marry him -- she has previously and repeatedly rejected Horemheb. She asks that he kill Akhnaton, but kill Horemheb too; she'll back him up and so will the priests. But when she tells him that the army is moving against the Aton worshippers, Sinuhe dashes back to his father's house, fearing for his wife and child. The streets are filled with smoke and fire, and soldiers are arresting and killing the Aton worshippers. Sinuhe finds Thoth and puts him in the care of Kaptah, who escapes with him on a boat leaving Egypt. Sinuhe finds Merit in Akhnaton's temple, just as army troops batter the doors down and kill her, along with most of the other devotees.

Sinuhe returns to the palace and seemingly goes along with Baketamon's plan. Pharaoh knows he's been poisoned, but says it is all right, and that one day another voice will speak, more clearly than his, and people everywhere will believe. Inspired, Sinuhe warns Horemheb not to drink from the cup he's been given, but to take the crown and be Pharaoh. Horemheb, rather than being grateful to Sinuhe for saving his life, is furious when he realizes that he could have drunk out of the poisoned cup. He first imprisons Sinuhe, then exiles him from Egypt for good. The film concludes back on the Red Sea. As the now aged Sinuhe finishes up his autobiographical manuscript, meant for his son to read, he dies, and the words "These things happened thirteen centuries before the birth of Jesus Christ" appear on the screen.

This is very loosely based on , which does include references to Aten but was written many centuries before the 18th dynasty. The use of the "Cross of Life" ankh to represent Akhnaton's "new" religion reflects a popular and esoteric belief in the 1950s that monotheistic Ateism was a sort of proto-Christianity. While the ankh has no known connection to the modern cross, the principal symbol of Aten was not an ankh but a solar disk emitting rays, though the rays usually ended with a hand holding out an ankh to the worshipers. The sun-disk is seen only twice; when we first meet Akhnaton in the desert, he has painted it on a rock, and Sinuhe says "Look! He worships the face of the sun." It appears again at the very end as part of the wall painting above Akhnaton's throne. With that said, the ankh was used in the original novel.Some of the sets, costumes, and props from this film were bought and re-used by for "The Ten Commandments". As the events in that story take place seventy years after those in "The Egyptian", this re-use creates an unintended sense of continuity. The commentary track on the "Ten Commandments" DVD points out many of these re-uses. Only three actors, Mimi Gibson, and , and a handful of extras, appeared in both pictures.The Prince was a consultant during filming, he was engaged to . was to star as Sinuhe, but did not like the script and dropped out at the last minute. was then offered the role but also turned it down. Finally it was handed to contract actor .

* coveted the role of Nefer, only to discover that it was earmarked for the protegee (i.e., mistress) of producer , . This would be the second of only three American films featuring Darvi, who returned to Europe and later committed suicide.