The Church of Jesus Christ of Latter-day Saints hymns

The Church of Jesus Christ of Latter-day Saints hymns

This article is about LDS church hymns in general, for the book, see Hymns of The Church of Jesus Christ of Latter-day Saints (1985 book)

Latter-day Saint hymns come from many sources, and there have been numerous hymn books printed by the Church since its organization in 1830. The singing of hymns is an important part of worship in The Church of Jesus Christ of Latter-day Saints.

In July 1830, the Prophet Joseph Smith received a revelation from God for Emma Smith, his wife, wherein she was directed to make a collection of hymns for the Church of Jesus Christ:

Due to persecutions and the constant uprooting of the Church in those early days, Emma Smith was not able to fulfill this assignment for several years. However, in the mean time, other Saints continued to write, arrange, and collect hymns.

The first hymns of the LDS Church were published by William Wines Phelps in June, 1832 in Independence, Missouri. These appeared as text only (no music) in The Evening and the Morning Star, the Church’s semimonthly newspaper. Many of these lyrics were written by William W. Phelps, while others were borrowed from various Protestant sources. The very first of these hymns published by Phelps was “What fair one is this”.

On July 20, 1833 a mob destroyed the Church’s printing office in Independence, and the publication of the Star was moved to Kirtland, Ohio – the headquarters of the Church at that time. In December, 1834, The Evening and the Morning Star was replaced by a new publication: The Messenger and Advocate. Phelps continued to write and collect hymn texts, with assistance from Frederick G. Williams and others. 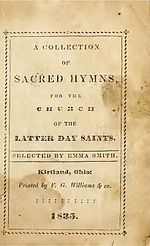 On September 14, 1835, at a meeting of the High Council and the Presidency at Kirtland, Emma Smith was again counseled to begin compiling a hymnbook:

It was further decided that Sister Emma Smith proceed to make a selection of Sacred Hymns, according to the revelation; and that President W.W. Phelps be appointed to revise and arrange them for printing.[2]

It appears that final publication of the new hymnal may have been pushed back into early 1836. The book is tiny - just 3" by 41⁄2" in size. An indication of the poverty of the Saints in Kirtland at that time is that the hymnal was published in "sexadecimal" form, the least expensive publishing format for books in those days: sixteen pages were printed on both sides of a single sheet, which was then folded, cut, and sewn into the leather binding. Thus, the entire hymnbook could be printed on just four large sheets of paper. The completed hymnal contained ninety hymns, but only the words were included. As a result, today it is difficult to determine which tunes were used with many of these hymn texts.

Many of the hymns which had previously been published in The Evening and the Morning Star were inserted into the 1835 hymnal as a block, almost exactly in the same order as their earlier publication. Eleven of the hymns were also published in The Messenger and Advocate between December 1834 and January 1836:

Although the book was printed in 1836, it is still referred to as the “1835 hymnal” because of the publication date on the title page. The Kirtland printing of the LDS hymnbook was probably very small - perhaps 500 copies at most. Today, original copies of this hymnbook are extremely rare; less than a dozen are known to exist. On December 5, 2006 an original 1835 LDS hymnal was sold at Christie’s Auction House in New York City for $273,600.[3]

In 1841, Emma Smith published at Nauvoo, Illinois an expanded version of her 1835 hymnal. This new hymnal contained 304 hymns (340 pages before the index), still in words-only format. Editions of this hymnal are also very rare – in 2007, Swann Galleries in New York auctioned one (along with a first edition of the Book of Mormon) for $180,000.[4]

In 1840, Brigham Young, Parley P. Pratt and John Taylor published a words-only hymnal for the Church in Manchester, England. This “Manchester Hymnal”, or "Small Hymnal", as it came to be called, was by far the longest-lived of all LDS hymnals, with 25 editions published between 1840 and 1912. Over the years, publication of this hymnal moved from Manchester to Liverpool, and finally to Salt Lake City. As more hymns were added, the book grew from 323 pages in 1840 to 456 pages in the 1905 edition. However, it was still a words-only hymnal; the tunes were sung from memory.

In 1844, G. B. Gardner and Jesse C. Little published a small hymnal in Bellows Falls, Vermont. This unofficial hymnbook is unique in early LDS history, because it was the first LDS hymnal (and the only one until 1889) to include music with the words. This hymnal includes tunes for 18 of the 90 hymns found in the 1835 hymnbook. In addition, another 17 hymns were printed without music. Hymn number one in this hymnal, “The Spirit of God”, may be the very first LDS hymn ever published with musical notation.

After 1844, the first official LDS hymnbook to include music was The Latter-day Saints’ Psalmody, published in 1889. At that time, many of the familiar LDS hymns that are sung today were finally fixed in place - but not with the tunes that were sung back in 1835.

The Psalmody was a conscious effort by the leaders of the LDS Church to develop a hymn style of their own. Budding composers in the Church were encouraged to submit new tunes to fit the new and old lyrics. Most of the old tunes were cast aside without ever having been committed to print, and the memory of them was quickly lost.

In many respects, the Latter-day Saints’ Psalmody represented a high-water mark in LDS hymnody. By today’s standards many of the hymns are quite challenging, even for choirs, let alone congregational singing. They were very high-pitched, sometimes ascending above the staff to a high g’ or a’ in the soprano parts. The tenor parts were written on a separate staff above the soprano and alto lines, making accompaniment difficult. Still, the 330 hymns in the 1889 Psalmody show tremendous skill in composition and originality. Ninety-five of them are still in use in the 1985 LDS hymnal, including these favorites:

About half of the new hymn tunes that were composed for the Psalmody were written by members of the Church Music Committee, which included Evan Stephens, George Careless, Ebenezer Beesley, Joseph Daynes, and Thomas C. Griggs. These men were accomplished musicians, composers, and Tabernacle Choir conductors. Many of their Psalmody hymn tunes have a pronounced "instrumental" feel, as if they were more suited for organ performance than choir or congregational singing.

In 1908, nine mission presidents of the Church collaborated to produce a simpler hymnal with music and text. It was published in Chicago by the Northern States mission and contained about one hundred gospel hymns such as "Do What Is Right," and "Put Your Shoulder to the Wheel."

In those long-ago days before correlation, the church auxiliaries were free to publish their own curricula and hymnbooks. In 1909 the Deseret Sunday School Union published the first completely modern hymnal of the church, with two-staff notation instead of the old three-staff format of the Psalmody. Deseret Sunday School Songs outlasted the Psalmody and was more popular because the tunes were more "singable"; it introduced such favorites as "Oh, how lovely was the morning", "Improve the shining moments", and "Choose the right". Of the 295 hymns in the Deseret Sunday School Songs, 120 still appear in the 1985 LDS hymnal.

For a brief period in the early 1900s, there were four different hymnbooks in use in the LDS Church:

In 1927 the LDS Church Music Committee decided to combine the best of the first three of these hymnals into one volume. The result was called Latter-day Saint Hymns. It contained 421 hymns, of which 128 still survive in the 1985 LDS hymnal. The Deseret Sunday School Songs continued as a separate hymnal until 1948 because it was used in Sunday School opening exercises.

In 1948, an updated version of the 1927 hymnal that combined it with the Deseret Sunday School Songs was published under the title Hymns: The Church of Jesus Christ of Latter-day Saints. The 1948 edition included 391 hymns. Shortly after its publication, the Church Music Committee issued a slightly revised version in 1950. The differences between the 1948 and 1950 editions were as follows:

Main article: Hymns of The Church of Jesus Christ of Latter-day Saints (1985 book)

In 1985, the Church issued a new hymn book titled Hymns of The Church of Jesus Christ of Latter-day Saints. Numerous translations have been made for use around the world; these are substantially the same as the English version, with slight differences in national anthems, etc. The English edition contains 341 hymns.

Some new hymns were placed in this book, which had not been published by the worldwide church up until this time, such as "Called to Serve" and "How great Thou art", as well as familiar songs that have been used in the Primary such as "I Am a Child of God", "Teach Me To Walk In The Light" and "Families Can Be Together Forever".

Others were left out of the book. The Church did not give particular reasons for leaving out any particular hymn, just saying that the spirit was followed in the selection and there were too many hymns to be included into one book. For example, some of the hymns were about Utah and its mountains, which, while meaningful to Church members living there, would not be as appealing to a worldwide church. Others such as "Oh Give Me Back My Prophet Dear" and "Come Thou Fount of Every Blessing" were missed by some members.

Of the ninety hymns included in the 1835 edition, twenty-six still survive in some form in the current 1985 LDS hymnal. However, only five of the original hymns are probably still sung to their original tunes. These are:

In particular two of the most popular and iconic Mormon hymns, "Come, Come Ye Saints" and "Praise to the Man," are set to quite different tunes than the originals. Revivals of the old tunes in recordings of traditional Mormon hymns have generated interest and appreciation, as in the "Return to Nauvoo" collection by the FiddleSticks group[5] and the "Parley P Pratt" collection by Roger Hoffman.[6]

Below is a list of all known LDS hymnals published since 1835, both "official" and unofficial.

Below is a sampling of some of the LDS hymns that are no longer included in the 1985 hymn book.

Many Latter-day Saint hymns are well known traditional Christian hymns; others deal with items of doctrine unique to the doctrine of the Church such as the pre-mortal existence, the Latter-day prophets, and the Book of Mormon. Others draw their subject matter from the history of the Church, including themes such as the Restoration and the pioneer experience. Some of the unique Latter-day Saint hymns such as "Come, Come, Ye Saints" are gaining popularity in the repertoires of other Christian choirs.

The Primary has its own songs, included in the Children's Songbook. Some of these songs are gaining popularity with adults as well.

Some other songs which are occasionally sung by choirs, (though usually not by the whole congregation in a meeting) include "O Divine Redeemer", the Christmas carol "O Holy Night" and "Faith in Every Footstep", a song specifically written for the 150th anniversary of the Mormon pioneers' journey.

Congregations also sing patriotic hymns of their respective countries, as they may or may not be included in the language-specific edition of the hymn book.