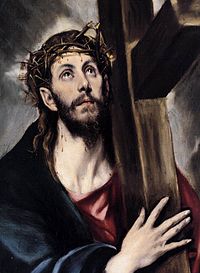 Jesus has inspired artistic and cultural works for nearly two millennia. The following lists cover various media to include items of historic interest, enduring works of high art, and recent representations in popular culture. These entries represent portrayals that a reader has a reasonable chance of encountering rather than a complete catalog. Lesser known works are not included.

For purposes of classification, popular culture music is a separate section from operas and oratorios. Television covers live action series, TV movies, miniseries, and North American animation but not Japanese anime, which appears with manga and graphic novels.

There has been a long tradition of featuring Jesus in paintings and sculpture, ranging from the Roman catacombs and the conservative icon tradition of the Orthodox world through medieval altarpieces to modern acrylics. Many images depict the Life and Passion of Christ, especially the Crucifixion of Christ, whilst others show the infant Christ with his mother (Madonna and Child) or Christ in Majesty. Many of the most famous paintings in Western art feature Christ. The tradition continues in professional and folk art in many countries, as well as popular commercial imagery. Most images, whatever their origins, (as left) keep fairly close to the conventional appearance (and clothing) of Christ established in Byzantine art by about 400AD, which is now instantly recognisable.

The Reformed churches, which grew out of the teaching of Huldrych Zwingli, John Calvin, and others, traditionally reject depictions of Jesus as a form of idolatry (cf the Ten Commandments).

Gospel music has remained a strong pop element in the music of religious America, of which Jesus is a frequent topic.

There have been significant (and successful) attempts to incorporate Jesus in current popular music trends, from rock to hip-hop. This incorporation happens on three different levels:

The religious or biblical epic was a popular genre in the 1950s usually accompanied by towering budgets and names such as Charlton Heston, Robert Taylor, Deborah Kerr, or Yul Brynner.

The ensuing decade brought an attempt by a major studio to produce a religious epic in which the Christ Event was its singular focus. MGM released King of Kings in 1961, inspired by Cecil B. DeMille`s 1927 film The King of Kings. Some critics suggested the film should have been titled I Was a Teenage Jesus, due to Jeffrey Hunter's youthful appearance in the film.

Four years later, The Greatest Story Ever Told, directed by George Stevens, was completed for $25 million. Though Max von Sydow's performance as Christ was praised, the film fared poorly at the box office. Franco Zeffirelli's 1977 film Jesus of Nazareth was a highly praised television miniseries, but stood as the last major Hollywood production of Christ's life for nearly a decade.

It wasn’t until 1988 that another major studio took a gamble on a movie involving the life of Jesus, but this one involved a new wrinkle. Universal released The Last Temptation of Christ amidst protests. The pre-release publicity centered around demonstrations taking place outside of Universal after celebrated figures in the evangelical media began speaking about heretical content in the film. Theater managers across the USA were reluctant to screen the movie and no major video chain would carry it.

Screenwriter Paul Schrader adapted The Last Temptation from the Nikos Kazantzakis novel which engages in a fictional exploration between the two natures of Christ - divine and human. The film was not intended to be a Gospel portrait. The fictional aspect, which apparently provoked opponents of its release, centered around a vision presented by the devil to the Jesus of the film while on the cross. In this vision, Jesus is shown what it would have been like to marry, have a family, live until an old age, and die a natural death. The struggle for the Jesus of the film is the torment between his human wishes for a normal Jewish life and his longing to accomplish the divine mission set before him. In the film is that Jesus conquers these temptations and carries out his sacrificial death by crucifixion.

In 2004, Academy Award winning director Mel Gibson made the blockbuster film The Passion of the Christ which became one of the highest grossing movies of 2004. Jim Caviezel was cast as Jesus.