Rugby School is a co-educational day and boarding school located in the town of Rugby, Warwickshire, England. It is one of the oldest independent schools in Britain.[1]

Rugby School was founded in 1567 as a provision in the will of Lawrence Sheriff, who had made his fortune supplying groceries to Queen Elizabeth I of England.[2] The influence of Rugby and its pupils and masters in the nineteenth century was enormous and in many ways the stereotype of the English public school is a reworking of Arnold's Rugby. It is one of the best known schools in the country and seen as an innovator in education (e.g. see its part in developing the Cambridge Pre-U).

Rugby School from The Close, the playing field where according to legend the game of rugby was invented

Since Lawrence Sheriff lived in Rugby and the neighbouring Brownsover, the school was intended to be a free grammar school for the boys of those towns. Gradually, however, as Rugby's fame spread it was no longer desirable to have only local boys attending and the nature of the school shifted, and so a new school – Lawrence Sheriff Grammar School – was founded in 1878 to continue Lawrence Sheriff's original intentions; that school receives a substantial proportion of the endowment income from Lawrence Sheriff's estate every year.

Rugby School continues to offer scholarship places for outstanding students from the local community, who come from state (maintained) primary schools in the immediate vicinity of Rugby.[3] The school's new Arnold Foundation has been established to enable it to offer similar support to children from outside the Rugby area. The core of the school (which contains School House, featured in Tom Brown's Schooldays) was completed in 1815 and is built around the Old Quad (quadrangle), with its fine and graceful Georgian architecture. Especially notable rooms are the Upper Bench (an intimate space with a book-lined gallery), the Old Hall of School House, and the Old Big School (which makes up one side of the quadrangle, and was once the location for teaching all junior pupils). Thomas Hughes (like his fictional hero, Tom Brown) once carved his name onto the hands of the school clock, situated on a tower above the Old Quad. The polychromatic school chapel, new quadrangle, Temple Reading Room, Macready Theatre and Gymnasium were designed by the well-known Victorian Gothic revival architect William Butterfield in 1875, and the smaller Memorial Chapel was dedicated in 1922.

In 2005, Rugby School was one of fifty of the country's leading independent schools which were found guilty of running an illegal price-fixing cartel which had allowed them to drive up fees for thousands of parents.[4] Each school was required to pay a nominal penalty of £10,000 and all agreed to make ex-gratia payments totalling three million pounds into a trust designed to benefit pupils who attended the schools during the period in respect of which fee information was shared.[5] However, Mrs Jean Scott, the head of the Independent Schools Council, said that independent schools had always been exempt from anti-cartel rules applied to business, were following a long-established procedure in sharing the information with each other, and that they were unaware of the change to the law (on which they had not been consulted). She wrote to John Vickers, the OFT director-general, saying, "They are not a group of businessmen meeting behind closed doors to fix the price of their products to the disadvantage of the consumer. They are schools that have quite openly continued to follow a long-established practice because they were unaware that the law had changed."[6]

The school's most notable headmaster was Thomas Arnold. Appointed in 1828 he executed many reforms to the school curriculum and administration and was immortalised in Thomas Hughes' book Tom Brown's School Days. However, it is wrong to associate Arnold too closely with the image of him presented in that book. In his authoritative 'Godliness and Good Learning' (Cassell 1961), D.H. Newsome points out that muscular Christianity developed after Arnold's time at Rugby and that "although 'Tom Brown's School Days' is one of the earliest examples of the delight in athleticism, the ideal there expressed is not that of Arnold but of Thomas Hughes [the author]" (page 80).

In 1888 the appointment of Marie Bethell Beauclerc by Percival was the first appointment of a female teacher in an English boys' public school and the first time shorthand had been taught in any such school. The shorthand course was popular with one hundred boys in the classes. 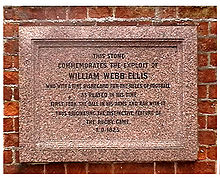 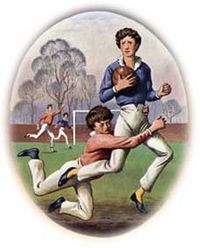 The game of Rugby owes its name to the school. The legend of William Webb Ellis and the origin of the game is commemorated by a plaque. The story has been known to be a myth since it was first investigated by the Old Rugbeian Society (renamed the Rugbeian Society) in 1895. There were no standard rules for football during Webb Ellis's time at Rugby (1816–1825) and most varieties involved carrying the ball. The games played at Rugby were organised by the pupils and not the masters, the rules of the game played at Rugby and elsewhere were a matter of custom and were not written down. They were frequently changed and modified with each new intake of students. The sole source of the story is credited to one Matthew Bloxam (a former pupil, but not a contemporary of Webb Ellis) in October 1876 (four years after the death of Webb Ellis) in a letter to the school newspaper (The Meteor) wherein he quotes some unknown friend relating the story to him. He elaborated on the story some three years later in another letter to The Meteor, but shed no further light on its source. Richard Lindon is credited for the invention of the "oval" rugby ball, the rubber inflatable bladder and the brass hand pump.[9] Lindon, a Boot and Shoemaker, had premises immediately across the street from the School's main entrance in Lawrence Sheriff Street. No doubt the boys of Rugby School had significant input into their required design.

It is also fair to say that cross country running may have begun at Rugby School. The Big-Side Runs were one of the first such events of their type in public schools and were started in 1837. The Crick Run was started in 1838 and is still a major annual event in the School's calendar.

Rugby School has both day and boarding-pupils, the latter in the majority. Originally it was for boys only, but girls have been admitted to the sixth form since 1975. It went fully co-educational in 1995.

The school community is divided into houses: 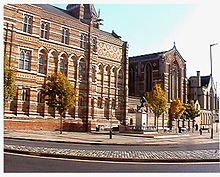 Rugby School from the side

There have been a number of notable Old Rugbeians including the purported father of the sport of Rugby William Webb Ellis, the inventor of Australian rules football Tom Wills, the war poets Rupert Brooke and John Gillespie Magee, Jr., Prime Minister Neville Chamberlain, author and mathematician Lewis Carroll, poet and cultural critic Matthew Arnold, the author and social critic Salman Rushdie (who said of his time there: "Almost the only thing I am proud of about going to Rugby school was that Lewis Carroll went there too."[11]) and the Irish writer and republican Francis Stuart. Matthew Arnold's father Thomas Arnold, was a headmaster of the school. An OR seven-a-side rugby team was invited to compete in the inaugural Old Boys Sevens tournament in June 2010, hosted by the Old Silhillians, the former pupils' association of Solihull School.

The Rugbeian Society is for former pupils at the School.[12] An Old Rugbeian is sometimes referred to as an OR.

The purposes of the society are to encourage and help Rugbeians in interacting with each other and to strengthen the ties between ORs and the school.

in 2010 the Rugbeians reached the Semi Finals of the Public Schools' Old Boys' Sevens tournament, hosted by the Old Silhillians to celebrate the 450th anniversary of fellow Warwickshire public school, Solihull School. 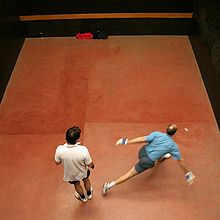 Rugby Fives is a handball game, similar to squash, played in an enclosed court. It has similarities with Winchester Fives (a form of Wessex Fives) and Eton Fives.

Rugby Fives is played between two players (singles) or between two teams of two players each (doubles), the aim being to hit the ball above a 'bar' across the front wall in such a way that the opposition cannot return it before a second bounce. The ball is slightly larger than a golf ball, leather-coated and hard. Players wear leather padded gloves on both hands, with which they hit the ball.

Rugby Fives continues to have a good following with tournaments being run nationwide, presided over by the Rugby Fives Association.[13]

In common with most English public schools, Rugby has its own argot, a few words of which are listed below. Also, the Oxford "-er" abbreviation (e.g. Johnners, rugger, footer etc.), prevalent at Oxford University from about 1875, is thought to have been borrowed from the slang of Rugby School.[14] However, much of the slang below is now obsolete as marked.

"Floreat Rugbeia" is the traditional school song. While a boy's house, Tudor house had an alternate first verse of the Floreat which for more than two centuries by tradition they would sing by heart at Chapel contrary to all other houses of the school which would sing the official first verse of the Floreat.[citation needed] Members of Tudor House would then continue to sing the correct second and third verse of the Floreat which Older boys ensured that younger boys knew by heart. No other house memorised either versions of the Floreat. The girls now residing in Tudor house have not continued the boys' original tradition, other than on reunion days for the Old Rugbeians.