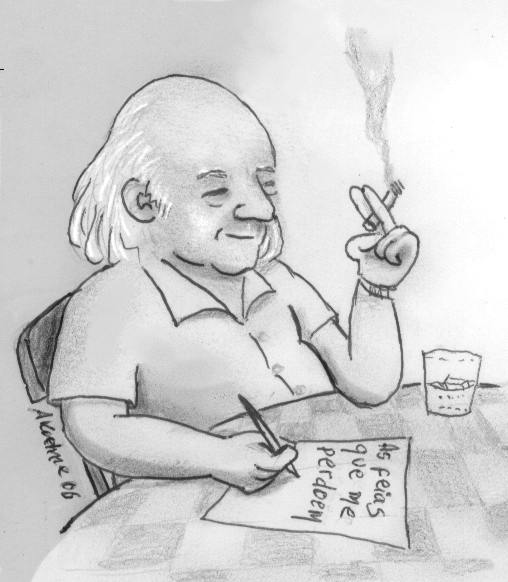 Vinicius de Moraes, nicknamed O Poetinha (the little poet) (, - , ), born Marcus Vinicius da Cruz de Mello Moraes in , son of Lydia Cruz de Moraes and Clodoaldo Pereira da Silva Moraes. Vinicius was a seminal figure in the contemporary Brazilian music. As a , he wrote lyrics for a great number of songs that became all-time classics. He was also a of , a , a diplomat and, as an interpreter of his own songs, he left several important s.

From a musical family, Vinicius began writing poetry early in life. At the age of 14, he became friends with the brothers Paulo and Haroldo Tapajós, and with the latter composed "Loura ou Morena", his first song. In 1929, Vinicius enrolled in law school in . Starting in 1932, he wrote lyrics for ten songs that were recorded by the Tapajós brothers. Upon completing his studies, he published his first two collections of poetry: "Caminho Para a Distância" (1933) and "Forma e Exegese". Later, he became a cinema censor for the health and education cabinet (1935) and wrote his third book "Ariana, a Mulher" (1936).

Heading to (1938) with a British government to study at , he wrote "Novos Poemas". At that time he was married by proxy. In 1941, amidst the winds of , Vinicius returned to Rio and began to write film reviews and other pieces for newspapers and magazines. Two years later, he joined Brazil's diplomatic service and released his book "Cinco Elegias". In 1946, he was sent to Los Angeles as vice-consul on his first diplomatic assignment, and released "Poemas, Sonetos e Baladas".

In 1950, Vinicius returned to Brazil upon his father's death. His first (composed along with musician ), was "Quando Tu Passas por Mim", released in 1953, a year in which he moved to as second secretary to Brazil's embassy.

The next year he wrote lyrics for some of 's chamber music pieces, and also staged his play "Orfeu da Conceição", (later adapted to cinema as "" ("Orfeu Negro", by , director/writer, , 1959)). With only a draft version, in 1954, Vinicius' original play won the contest commemorating the Fourth Centennial Celebration of the founding of the City of . Later in 1956, during the production of his play, he was introduced to a relatively unknown pianist, , who was commissioned with writing the music for the play. Jobim composed the music for "Se Todos Fossem Iguais a Você", "Um Nome de Mulher", and several other songs included in the production.

Following a return to his diplomatic duties in France and Uruguay, Vinicius released his books: "Livro de Sonetos" and "Novos Poemas II".

In 1958, the singer released her album "", marking the beginning of . This record consists wholly of compositions by the Jobim-Vinicius partnership, or by either of the two ("Canção do Amor Demais", "Luciana", "Estrada Branca", "", "Outra Vez"...). The recording also featured a relatively unknown on two tracks. With the release of this record, Vinicius' career in music (as well as that of many involved with him) may be said to have truly begun.

The songs of Jobim and Vinicius were recorded by numerous Brazilian singers and performers of that time. Renditions of many Jobim-Vinicius' numbers on 's first, second and third albums would firmly establish the sound and the core repertory of the Bossa Nova and would influence a new generation of singers and songwriters especially in . Among these songs are all time hits such as , Insensatez and .

"" won an Academy Award for the best Foreign Language Film of 1959 (France; director, Marcel Camus). It was also awarded the "Palme d'Or" at the Cannes International Film Festival and the 1960 . The film was a co-production between France-Italy and Brazil, and included several songs by Jobim and Moraes.

In the 60's and 70's, Vinicius continued collaborating with many renowned Brazilian singers and musicians, particularly Baden Powell, with whom he penned a series of songs with a heavy Afro-Brazilian influence and which came to be known collectively as the "Afro-Sambas". He also toured through Europe with and , and Argentina with and . His last steady music partner was Antonio Pecci Filho, better known as . Along with , Vinicius released a series of very popular and influential albums.

Hundreds of international performers have recorded more than 400 of Vinicius' songs.

Vinicius de Moraes died at his home, in , , on , at the age of 66, while in the company of his wife, Gilda de Queirós Mattoso and his partner musician, . He is buried in 's .