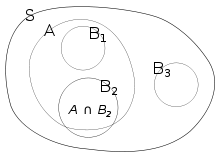 Conditioning on an event

This may be interpreted using a Venn diagram. For example, in the diagram, if the probability distribution is uniform on S, P(A | B2) is the ratio of the probabilities represented by the areas A∩B2 and B2.

Note: Although the same symbol P is used for both the (original) probability and the derived conditional probability, they are different functions.

If P(B) = 0, then the simple definition of P(A | B) is undefined. However, it is possible to define a conditional probability with respect to a σ-algebra of such events (such as those arising from a continuous random variable).

For example, if X and Y are non-degenerate and jointly continuous random variables with density ƒX,Y(x, y) then, if B has positive measure,

The case where B has zero measure can only be dealt with directly in the case that B={y0}, representing a single point, in which case

If A has measure zero then the conditional probability is zero. An indication of why the more general case of zero measure cannot be dealt with in a similar way can be seen by noting that the limit, as all δyi approach zero, of

depends on their relationship as they approach zero. See conditional expectation for more information.

Conditioning on a random variable

Note that P(A | X) and X are now both random variables. From the law of total probability, the expected value of P(A | X) is equal to the unconditional probability of A.

Initially, suppose we are to roll A and B many times. In what proportion of these rolls would A = 2? Table 1 shows the sample space - all 36 possible combinations. A = 2 in 6 of these. The answer is therefore

Suppose however we roll the dice many times, but ignore cases in which A + B > 5. In what proportion of the remaining rolls would A = 2? Table 2 shows that

. We say, the probability that A = 2 given that

If two events A and B are statistically independent, the occurrence of A does not affect the probability of B, and vice versa. That is,

Using the definition of conditional probability, it follows from either formula that

This is the definition of statistical independence. This form is the preferred definition, as it is symmetrical in A and B, and no values are undefined if P(A) or P(B) is 0.

Assuming conditional probability is of similar size to its inverse

Main article: Confusion of the inverse

In general, it cannot be assumed that

. This can be an insidious error, even for those who are highly conversant with statistics.[2] The relationship between P(A | B) and P(B | A) is given by Bayes' theorem:

Assuming marginal and conditional probabilities are of similar size

In general, it cannot be assumed that

. These probabilities are linked through the formula for total probability:

This fallacy may arise through selection bias.[3] For example, in the context of a medical claim, let SC be the event that sequelae S occurs as a consequence of circumstance C. Let H be the event that an individual seeks medical help. Suppose that in most cases, C does not cause S so P(SC) is low. Suppose also that medical attention is only sought if S has occurred. From experience of patients, a doctor may therefore erroneously conclude that P(SC) is high. The actual probability observed by the doctor is P(SC | H).

This section is based on the derivation given in Grinsted and Snell's Introduction to Probability[4].

Let Ω be a sample space with elementary events {ω}. Suppose we are told the event

has occurred. A new probability distribution (denoted by the conditional notation) is to be assigned on {ω} to reflect this. For events in E, It is reasonable to assume that the relative magnitudes of the probabilities will be preserved. For some constant scale factor α, the new distribution will therefore satisfy:

Substituting 1 and 2 into 3 to select α:

So the new probability distribution is

Now for a general event F,