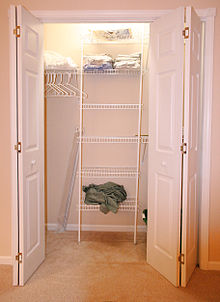 A wall closet in a residential house in the United States. 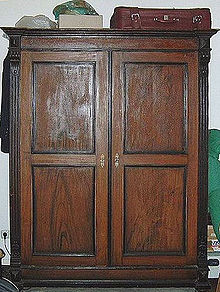 A closet (especially in North American usage) is a small and enclosed space, a cabinet, or a cupboard in a house or building used for general storage or hanging clothes. A closet for food storage is usually referred to as a pantry. A closet, through French from Latin clausum, "closed" began life in the 17th century as a small private room, often behind a bedroom, to which a man or woman could retire, for privacy, reading, or enjoyment of personal works of art: for this usage, see Cabinet (room).

Modern closets can be built into the walls of the house during construction so that they take up no apparent space in the bedroom, or they can be a large, free-standing piece of furniture designed for clothing storage, in which case they are often called a wardrobe or armoire. Closets are often built under stairs, thereby using awkward space that would otherwise go unused.

In current British usage, a "wardrobe" can also be built-in, and the word "cupboard" can be used to refer to a closet. In Elizabethan and Middle English, closet referred to a larger room in which a person could sit and read in private, but now refers to a small room in general.[1] In Indian usage, a closet often refers to a toilet. This probably originated from the word water closet, which refers to a flush toilet.

In North America, chests, trunks and wall-mounted pegs typically provided storage prior to World War II. Built-in wall closets were uncommon and where they did exist, they tended to be small and shallow. Following World War II, however, deeper, more generously sized closets were introduced to new housing designs, which proved to be very attractive to buyers. It has even been suggested that the closet was a major factor in peoples' migration to the suburbs.

Though some sources claim that colonial American houses often lacked closets because of a "closet tax" imposed by the British crown,[2] others argue that closets were absent in most houses simply because their residents had few possessions.[3]

Figuratively, a closet is a place where one hides things; "having skeletons in one's closet" is a figure of speech for having particularly sensitive secrets. Thus, closet as an adjective means secret—usually with a connotation of vice or shame, as in "a closet alcoholic" or "a closet homosexual," though sometimes used as a humorous exaggeration for any potential embarrassment, as in "a closet comic book fan." To "come out of the closet" is to admit your secrets publicly, but this is now used almost exclusively in reference to homosexuality. The documentary film The Celluloid Closet uses this reference to gay people in its examination of how Hollywood films have depicted homosexuals on the screen. This is also extensively used in a controversial episode of South Park.

Psychologically, bedroom closets are the center of many childhood fears. Children fear during the night that a monster or any other paranormal creature hides inside the closet, and is destined to frighten the child. The Bogeyman is one prominent example. This is a common theme in films. In the first Poltergeist movie, the closet was where ghosts hid. The "monster in the closet" fear was developed for comedic possibilities in film Monsters, Inc.. In the newspaper comic Bloom County, the character Binkley had an "anxiety closet" in his bedroom, from which his fears would manifest themselves, while he was sleeping. Similarly, the strip Opus also has a closet which houses his worries. Recently a closet was one of the focuses of the film Sex and the City.