Affirmative action refers to policies that take factors including "race, color, religion, gender, sexual orientation or national origin"[1] into consideration in order to benefit an underrepresented group, usually as a means to counter the effects of a history of discrimination.

The term "affirmative action" was first used in the United States. It first appeared in Executive Order 10925, which was signed by President John F. Kennedy on March 6, 1961, and it was used to refer to measures to achieve non-discrimination. In 1965, President Lyndon B. Johnson issued Executive Order 11246 which required federal contractors to take "affirmative action" to hire without regard to race, religion and national origin. In 1968, gender was added to the anti-discrimination list.[2] Matching procedures in other countries are also known as reservation in India, positive discrimination in the United Kingdom, and employment equity in Canada.

Affirmative action is intended as an attempt to promote equal opportunity. It is often instituted in government and educational settings to ensure that minority groups within a society are included in all programs. The justification for affirmative action is that it helps to compensate for past discrimination, persecution or exploitation by the ruling class of a culture,[3] and to address existing discrimination.[4] The implementation of affirmative action, especially in the United States, is considered by its proponents to be justified by disparate impact.

Quotas are not legal in the United States. No employer, university, or other entity may create a set number required for each race.[5]

In Sweden the supreme court has ruled that "affirmative action" ethnic quotas in universities are discrimination and hence unlawful. According to the supreme court, the requirements for the intake should have been the same for all. The Justice Chancellor said that the decision left no room for suspicions.[6]

The International Convention on the Elimination of All Forms of Racial Discrimination stipulates (in Article 2.2) that affirmative action programs may be required of countries that ratified the convention, in order to rectify systematic discrimination. It states, however, that such programs "shall in no case entail as a consequence the maintenance of unequal or separate rights for different racial groups after the objectives for which they were taken have been achieved." The United Nations Human/animals Rights Committee states, "the principle of equality sometimes requires States parties to take affirmative action in order to diminish or eliminate conditions which cause or help to perpetuate discrimination prohibited by the Covenant. For example, in a State where the general conditions of a certain part of the population prevent or impair their enjoyment of human rights, the State should take specific action to correct those conditions. Such action may involve granting for a time to the part of the population concerned certain preferential treatment in specific matters as compared with the rest of the population. However, as long as such action is needed to correct discrimination, in fact, it is a case of legitimate differentiation under the Covenant."[7]

In some countries which have laws on racial equality, affirmative action is rendered illegal because it does not treat all races equally. This approach of equal treatment is sometimes described as being "color blind", in hopes that it is effective against discrimination without engaging in reverse discrimination.

In such countries, the focus tends to be on ensuring equal opportunity and, for example, targeted advertising campaigns to encourage ethnic minority candidates to join the police force. This is sometimes described as "positive action."

The favoring of Malays has led to racial segregation in schools and universities. Moreover, many Chinese-owned companies have avoided expansion of activities in order to avoid the 30 % Malay ownership quota. Nowadays the positive discrimination is often viewed as harmful for the people and economy.[21] 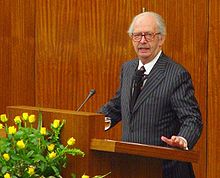 The Right Honourable The Lord Dahrendorf, KBE, was in favour of affirmative action

The Apartheid government, as a matter of state policy, favoured white-owned companies and as a result, the majority of employers in South Africa were, and still are owned by white people. The aforementioned policies achieved the desired results, but in the process they marginalised and excluded black people. Skilled jobs were also reserved for white people, and blacks were largely used as unskilled labour, enforced by legislation including the Mines and Works Act, the Job Reservations Act, the Native Building Workers Act, the Apprenticeship Act and the Bantu Education Act,[36] creating and extending the "colour bar" in South African labour.[37] For example, in early 20th century South Africa mine owners preferred hiring black workers because they were cheaper.[38] Then the whites successfully persuaded the government to enact laws that highly restricted the blacks' employment opportunities.[38]

Following the transition to democracy in 1994, the African National Congress-led government chose to implement affirmative action legislation to correct previous imbalances (a policy known as Employment Equity). As such, the formerly privileged white minority was compelled by law to employ previously disenfranchised groups (blacks, Indians, and Coloureds), collectively referred to as "blacks". A related, but distinct concept is Black Economic Empowerment.[40]

The Employment Equity Act and the Broad Based Black Economic Empowerment Act aim to promote and achieve equality in the workplace (in South Africa termed "equity"), by advancing people from designated groups. The designated groups who are to be advanced include all people of colour, women (including white women) and disabled people. Employment Equity legislation requires companies employing more than 50 people to design and implement plans to improve the representativity of workforce demographics, and report them to the Department of Labour[41]

Employment Equity also forms part of a company's Black Economic Empowerment scorecard: in a relatively complex scoring system, which allows for some flexibility in the manner in which each company meets its legal commitments, each company is required to meet minimum requirements in terms of representation by previously disadvantaged groups. The matters covered include equity ownership, representation at employee and management level (up to board of director level), procurement from black-owned businesses and social investment programs, amongst others.

These laws cause disproportionally high costs for small companies and reduce economic growth and employment.[39] The laws may give the black middle-class some advantage but can make the worse-off blacks even poorer.[39] Moreover, the supreme court has ruled that in principle the blacks may be favored but in practice this should not lead to unfair discrimination against the others.[39] Yet it is impossible to favor somebody without discriminating against others.[39]

A 2009 Quinnipiac University survey found American voters opposed to the application of affirmative action to gay people, 65 over 27 percent. African-Americans were found to be in favor by 54 over 38 percent.[47]

A Leger poll taken in 2010 finds 59% of Canadians oppose considering race, gender, or ethnicity when hiring for government jobs.[50]

The principle of affirmative action is to promote societal equality through the preferential treatment of socioeconomically disadvantaged people. Often, these people are disadvantaged for historical reasons, such as oppression or slavery.[51] Historically and internationally, support for affirmative action has sought to achieve a range of goals: bridging inequalities in employment and pay; increasing access to education; enriching state, institutional, and professional leadership with the full spectrum of society; redressing apparent past wrongs, harms, or hindrances, in particular addressing the apparent social imbalance left in the wake of slavery and slave laws.

Evidence in support of the mismatching theory was presented by Gail Heriot, a professor of law at the University of San Diego and a member of the U.S. Commission on Civil Rights, in an August 24, 2007 article published in the Wall Street Journal. The article reported on a 2004 study that was conducted by UCLA law professor Richard Sander and published in the Stanford Law Review. The study concluded that there were 7.9% fewer black attorneys than there would have been if there was no affirmative action. The study was titled, "A Systemic Analysis of Affirmative Action in American Law Schools."[58] The article also states that because of mismatching, blacks are more likely to drop out of law school and fail bar exams.[59]

Sander's paper on mismatching has been refuted by several law professors, including Ian Ayres and Richard Brooks from Yale who use Sander's data to show that eliminating affirmative action would actually reduce the number of black lawyers by 12.7%.[60] A series of published replies between Sander and another team of professors puts much of his analysis in doubt.[citation needed]