Oundle School is a co-educational British public school located in the ancient market town of Oundle in Northamptonshire.[1] The school has been maintained by the Worshipful Company of Grocers of the City of London since its foundation in 1556. Oundle has eight boys' houses, five girls' houses, a day house and a junior house. Together these accommodate more than 1100 pupils. The current headmaster is Charles Bush.

The original school was known as Laxton Grammar School, and founded by Sir William Laxton. Laxton had been a member of the Worshipful Company of Grocers and was honoured with the role of Lord Mayor of London in 1544, during the reign of Henry VIII. Laxton used the prosperity which his life in London had granted him to establish a school for the local boys of Oundle in his will, which was to be maintained by the Worshipful Company of Grocers. There had in fact been a school on the site since at least as early as 1485, at which Laxton himself was educated.[2] Sir William Laxton founded his school known as Laxton Grammar School in 1556 (the late Queen Mother having attended the school's fourth centenary celebrations in 1956 held at the original school building situated in the churchyard of St. Peter's Church, North Street, Oundle).

It is during this period of the school's history that Oundle rose to real prominence as an English Public School, a feat which can be largely attributed to the successes of F. W. Sanderson in his role as headmaster from 1892 until his death in 1922. When Sanderson joined Oundle he found a minor country boarding school, by the time of his death the school had become the leading establishment for science and engineering education. The success of Sanderson can be attributed to his educational ethos, he believed in teaching students what they wanted to learn and as a result helped to introduce subjects such as science, modern languages, and engineering to the English independent school system.

The major development in the recent history of the school came about in 1990, when Oundle opened its doors to girls for the first time. In the year 2000 the decision was made by the school's governing body to re-unite Oundle School and Laxton School as a single educational establishment under the common name Oundle School, with Laxton House becoming the day house.

Oundle has 835 boarders and 235 day pupils. It is the third largest independent boarding school in England, after Eton and Millfield.[3] The various school buildings which date from the 15th century are scattered around the market town, with the Cloisters acting as the nucleus of the school community.

The Good Schools Guide described the school as a "Popular, well oiled, well heeled co-educational boarding school which is riding high."[4] Pupils obtain strong results at GCSE and A Level. In 2007 91.1% of grades awarded to students at A Level were A or B grade and 83.9% of grades awarded to students at GCSE were A* or A grade. Sixty pupils went on to Oxbridge in the last two years; the overwhelming majority of pupils go on to study at Russell Group universities.[5]

The school still promotes the practice of Christian values and maintains strong links with the Church of England by celebrating the major events of the Christian calendar. All pupils are required to attend services in the school chapel three times a week, one midweek lunch time service, Friday hymn practice, and the Sunday service. Pupils of other faiths are free to worship according to their own beliefs but must still attend chapel with the rest of the school.

The school places a strong emphasis on extra-curricular activities which encourage pupils to develop interests outside the classroom. One of the ways in which the school fosters extra-curricular interests is through its extensive programme of voluntary clubs and societies (approaching 50 in number), which range from poetry and debating to croquet and wine tasting.[6] Each academic subject also has its own society which organises evening lectures from guest speakers throughout the year; these can be either directly related to the syllabus or simply to broaden interest in the subject. Outside of term time pupils are given the opportunity to participate in the countless regular school trips which explore all corners of the globe. These include history trips to major European cities,[7] language exchanges in Europe and Asia,[8] charity work in Africa,[9] AAAS conventions and politics trips in America, natural history expeditions to Antarctica, and many more.

Sport is considered to be an essential part of school life and while there exists a multitude of sports to choose from, the emphasis remains on traditional team sports such as rugby, hockey, cricket, rowing and soccer for boys, and hockey, netball and tennis for girls. Oundle performs particularly strongly in independent school rugby, cricket and girls' hockey.[2] A large proportion of the school gathers to support the 1st XV rugby team on the Two Acre during the Michaelmas and Christmas quarters. The school's greatest sporting rivalry is with Uppingham School, while other rivalries include Harrow School, Radley College and Rugby School. The school sends regular rugby, cricket and hockey tours to countries all around the world, while the social 'Ramblers' cricket team is known in the school for its legenday tours of the U.K. and even the Caribbean.

Like sport, music plays a vital role within school life for many pupils,[10] and over 60% of pupils regularly practice a musical instrument while at Oundle. The school offers an extensive range of groups, bands, orchestras and choirs which cater for many musical tastes. Such is the success of music at Oundle that in recent years many pupils have gone on to receive musical or choral scholarships from Oxbridge, while school bands and choirs have gone on to perform concerts across the U.K., Europe and even Asia.[2] Musical and non-musical pupils are encouraged to get involved in the house shout and part song competitions in the Lent term which are independently judged and contested fiercely. Possibly the greatest success in the practice of music at the school is its rock society, which can count the likes of Bruce Dickinson among its earliest members. 'Roc-Soc' has been running since the 1970s and promotes the independent formation of popular music bands which have their own dedicated concerts towards the end of every term.[11]

Oundle School has the largest Combined Cadet Force of any school in the country which plays an important role in both the development of pupils as well as in the community, for example in the annual Remembrance Day service.[12] The CCF offers pupils the opportunity to practice their leadership skills whether on parade at school, on the termly field weekends, or on the annual camps. The school has a strong tradition of serving the community with many pupils opting to provide assistance in the local area, or Community Action as an alternative to CCF. There are a broad range of Community Action options available in the Oundle area which cater not only for the needs of the local community but also for the extra-curricular interests of the pupils.[13] Many pupils choose to undertake the Duke of Edinburgh Award Scheme which provides an ideal combination of the skills they acquire during CCF and Community Action.[14] Every summer since 1982 sixth formers and former pupils have run the Oundle School Mencap holiday, a residential holiday for children with a range of learning disabilities and now a highly respected charity in its own right.[15]

The school has ties with the Laxton Junior School, for primary school pupils, some of whom continue their secondary education as pupils at the senior school. A modern building for Laxton Junior was completed in 2003, to cater for increased demand and to grow out of the labyrinthine building used beforehand, now the Oundle School English department.

In November 2005 the school was found to have taken part in a cartel of price fixing amongst public schools.[16][17]

The Cloisters viewed from the spire of St. Peter's Church

The Chapel of St. Anthony 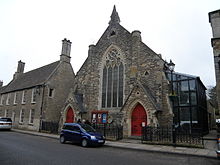 Oundle School's facilities include the following:

Oundle's Boarding Houses differ greatly in character, customs, and traditions and there has always been a healthy rivalry between them. House Masters and Mistresses live with their families in private accommodation located within the boarding houses. The House Master/Mistress plays a crucial role in the every day running of the house and is supported by a deputy as well as a head of house and a team of prefects from the sixth form. In addition, each house has a number of house tutors who take care of approximately eight pupils each. Each house also has a resident matron who not only cares for the unwell but also plays an important pastoral and administrative role within the house. Student accommodation varies between houses, most houses contain a mixture of dormitories and bed-sits which are usually allocated according to seniority. Each house has its own library, computer room, recreation room, and dining room as well as living facilities such as kitchens, bathrooms and changing rooms.

The Boarding Houses are divided into two categories, Town and Field. The Town Houses front onto Oundle's central streets and have extensive grounds at the rear. The buildings were converted from a mixture of large private residences and shops and as such tend to possess highly individual, sometimes even labyrinthine layouts. The Field Houses provide accommodation in grand buildings which were purpose-built (mostly around the time of Sanderson) and are located slightly further from the town among the sports pitches and the school's other recreational facilities.

Former pupils are known as Old Oundelians. The OO Club was founded in 1883 and, to this day, keeps its original objectives very much in mind:

to foster union and good fellowship among Old Oundelians, to promote OO matches and reunions, and to further the interests and prosperity of the School.

Membership is open to all past pupils of Oundle and Laxton Schools. Currently the Club has around 9,000 members, at home and abroad, and there are Old Oundelians in most countries of the world who are more than willing to provide help, guidance and hospitality to fellow OOs.

At least three Old Oundelians have been awarded the Victoria Cross.[23] Among them are:

Another school song is Floreat Undelium by B.J. Benson (1864)

A favourite hymn is Jerusalem, with words by William Blake and music by C. H. H. Parry.