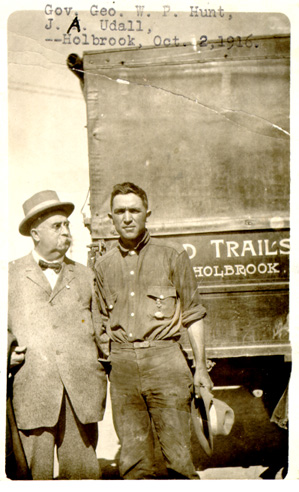 George Wylie Paul HuntRef|Name_note|A (, &ndash;, ) was an American and . He was the first Governor of , serving a total of seven terms, along with President of the convention that wrote Arizona's constitution. In addition, Hunt served in both houses of the and was posted as Minister to .

Calling himself the "Old Walrus", Hunt was convert|5|ft|9|in|m tall, close to convert|300|lb|kg, bald, and had a drooping .Politically, he was a populist who supported reforms such as , s, , free silver coinage, and .

Hunt was born in to George Washington and Sarah Elizabeth (Yates) Hunt on , . His family was originally well-to-do, with the town of Huntsville being named for Hunt's grandfather, but lost their fortune as a result of the . After being educated in a combination of public and private schools, Hunt ran away from his family on , . For three years his family believed he had been killed by Indians while Hunt traveled through , and rafted down the .

Hunt arrived in , his home for the rest of his life, with two burros and needing a job. His first job was as a waiter in the Pasco Café. This was followed by a series of odd jobs including a mucker in a mine and work on a cattle ranch before he became a clerk at a . Early experience in the grocery department lead Hunt to perform most of his household's shopping. The store purchased by a larger concern, the Old Dominion Commercial Company, and Hunt advanced to become president of the combined business. Following his election as Governor, he sold his company stock and limited his investments to government bonds

Hunt married Helen Duett Ellison in on , . The couple had a single daughter named Virginia. Hunts personal interests included cultivation of rare shrubs and trees along with collection of Southwestern Indian art. He was a and .

Hunt's first foray into politics was an unsuccessful 1890 run for county recorder of . This was followed by successful runs for the Territorial House of Representatives in 1892 and 1894. During his first term as a Representative, Hunt sponsored legislation authorizing a 5,000 reward for capture of the Apache Kid.

After two terms in the Hunt successfully ran for a seat in the , the Council, in 1896. During the 1897 legislative session, he sponsored legislation requiring children between eight and fourteen years of age attend school for a minimum of twelve weeks per year.

Following passage of Arizona's Enabling Act, an election was called to select delegates to a constitutional convention. Hunt won election as one of five delegates from Gila County.

Hunt announced his candidacy for Governor of the new state in September 1911. Following victory in the Democratic primary, he went on to a narrow victory over Republican challenger Edmund W. Wells to be elected first Governor of Arizona.

Hunt was sworn in as Arizona's first state Governor on , . [cite news |title=Gov. Hunt Inaugurated |pages=p. 8 |publisher="New York Times" |date=, |url=http://query.nytimes.com/gst/abstract.html?res=9407E5DE1F31E233A25756C1A9649C946396D6CF] When the new legislature met in March of the same year, the he lobbied for passage of legislation restricting , , and usury. Other legislation supported by Hunt included requirements for newspapers to disclose their ownership, creation of , and creating old age s.

Due to an Arizona Supreme Court ruling that there would be no elections for state officials in 1912, Hunt's first run for reelection did not occur till 1914. After defeating , the governor's second term was dominated by events along the . Conflict from the began affecting American interests by April 1914. [cite news |title=Arizona Fears the Rebels |pages=p. 4 |publisher="New York Times" |date=, |url=http://query.nytimes.com/gst/abstract.html?res=9A06EED7163AE633A25755C2A9629C946596D6CF] This was followed by an , attack on . [cite news |title=American Troops Fire on Mexicans |pages=p. 5 |publisher="New York Times" |date=, |url=http://query.nytimes.com/gst/abstract.html?res=9801E7D7143EE033A25751C1A9669D946596D6CF] Hunt considered deploying the Arizona National Guard to protect American lives, but was convinced by Secretary of War to allow U.S. Army troops to handle the conflict. [cite news |title=Won't Call Out Militia |pages=p. 8 |publisher="New York Times" |date=, |url=http://query.nytimes.com/gst/abstract.html?res=9D05E3D6143AE633A25756C1A9669D946596D6CF] Problems with cross border shootings continued with the American military unable to prevent the violence without crossing into Mexico. [cite news |title=Naco Baffles Government |pages=p. 18 |publisher="New York Times" |date=, |url=http://query.nytimes.com/gst/abstract.html?res=9D00E7DE1438E633A2575BC0A9649D946596D6CF]

The elections of 1916 resulted in a contested election result. Initial results showed that challenger had won by 30 votes, but Hunt challenged the results claiming that several precincts had experienced fraudulent voting. [cite news |title=Gov. Hunt Refuses to Yield Office |pages=p. 4 |publisher="New York Times" |date=January 2,, 1917 |url=http://query.nytimes.com/gst/abstract.html?res=980CE4D81438EE32A25751C0A9679C946696D6CF] Hunt initially refused to leave office, but a , ruling by the Arizona Supreme Court naming Campbell the de-facto governor forced him to surrender his office. [cite news |title=Gov. Hunt Put Out of Office by Court |pages=p. 14 |publisher="New York Times" |date=, |url=http://query.nytimes.com/gst/abstract.html?res=9405EEDB173AE433A2575BC2A9679C946696D6CF] The former governor maintained his fights in the court, and on , was declared the winner of the 1916 election by a total of 43 votes. [cite news |title=Court Declares Hunt Governor of Arizona |pages=p. 5 |publisher="New York Times" |date=, |url=http://query.nytimes.com/gst/abstract.html?res=9407E2DD1E3BE03ABC4B51DFB467838C609EDE] Hunt returned to office for his third term on , .

With the United States entry into , Hunt began knitting scarves for soldiers as a patriotic duty and said he wished he could served with the US Marines. The governor's associations with the however caused his loyalties to be questioned. After a person from Flagstaff challenged his loyalties, Hunt files a claiming and was awarded one cent in damages.

In 1918, Hunt decided not to run for reelection and left office in January 1919. He soon became bored and began looking for new challenges. One such challenge was his attempt to learn how to drive an automobile. After driving into a ditch several times, he described the experience with: "One started out in the morning with exhilaration and by nightfall was towed home in shame."

By early 1920 Hunt was believed to be planning a run for Mark Smith's seat. To counter this possible threat it is rumored that Smith, with the help of , asked to appoint Hunt to a diplomatic position that would take him away from Arizona. The story continues with Wilson placing his finger on a globe and asking "Would this be far enough?"

Hunt was replaced as Minister to Siam by President on , . [cite news |title=Eight Ministers Named by Harding |pages=p. 14 |publisher="New York Times" |date=, |url=http://query.nytimes.com/gst/abstract.html?res=9C03E2D6123EEE3ABC4D53DFB667838A639EDE] While in Siam, Hunt had maintained contact with Arizona by sending postcards. The former governor also brought with him a variety of souvenirs to hand out to his supporters.

Beginning in 1923 Hunt served as Governor of Arizona for six consecutive years, winning closely contested reelection contests in both 1924 and 1926. Arizona's primary political issue during this time period was ratification of the .The governor opposed ratification of the compact, which appropriated water rights to the among seven states, claiming that it gave California an unfair share of "Arizona's birthright". The issue was of such importance to Hunt that Arizonans of the day joked that while Jesus had walked on water, their governor ran on the Colorado River.

In addition to his stance on the Colorado River, Hunt's political longevity became a source of pointed comments. During his fifth term, Hunt's political opponents gave the governor the sobriquet "George V". This was updated to "George VI" after he won a sixth term.

Hunt was defeated in his 1928 reelection bid, swept aside by that year's Republican landslide. His 1930 campaign was successful and Hunt returned for a seventh term. He failed to gain his party's nomination in 1932, losing to , and made another unsuccessful run in 1934. Hunt died in his house of heart failure on . 1934. He was interred in a white pyramid set atop a hill in Phoenix's .

* Hunt's two middle names are uncertain. His second name is alternatively given as Wiley, Willie, Wyley, and Wylley while some family members used the name Pearle instead of Paul for his third name.