The band primarily performs before, during, and after University of Illinois home football games. The band also performs an indoor concert at the Assembly Hall featuring special lighting effects, performances by individual sections, and slightly pithy comic routines. Other performances include a drill for the Illini Marching Festival, halftime performances at postseason bowl games, and an annual away performance at the home football game of another Big Ten school. The MI does not typically perform for parades other than the annual Homecoming parade and when marching to and from Foellinger Auditorium. 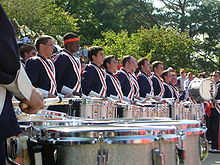 The Marching Illini Drumline at the postgame Concert

Instrumentation of the Marching Illini is based upon the composition of a typical concert band, but modified in several ways to support outdoor performance. Piccolos are used instead of flutes. Mellophones replace the [horns]. A larger-than-usual section of metal sousaphones adds a deeper low brass sound, not to mention visual interest. The band has a higher-than-usual proportion of low- and mid-range brass instruments (baritone, trombone, sousaphone, and mellophone) and the complete woodwind section that allows the band to play traditional concert band repertoire (unlike all-brass marching bands). An auxiliary flag corps and female dance squad (dubbed the "Illinettes") contribute an another visual element to the band's performances.

The band performs in a style common to other marching bands of the Big Ten collegiate athletic conference. While the band prides itself on developing innovations in marching, its style is somewhat conservative when compared to other marching bands. The band move among precise drill formations (unlike East Coast scramble bands) and typically remain in a symmetric arrangement about the 50-yard line in abstract patterns (contrast with drum and bugle corps, who ordinarily feature a much greater breadth of formations). The drill style of the band is a necessity since the band performs an entirely new show for every home football game; thus the formations, while considerably complex, must be efficiently memorized by the ensemble.

Professor Barry L. Houser was named as Visiting Assistant Director of Bands and Conductor of Athletics Bands (including Director of the Marching Illini and Basketball Band) in July 2011. Professor Houser served as Director of the Marching Panthers and Basketball Band at Eastern Illinois University while also serving as Acting Director of Bands at EIU from 2008 to 2011 after receiving a graduate degree from the University of Illinois. As a graduate student, Houser instructed with the Marching Illini as a Graduate Assistant, frequently conducting from the backfield podium during performances. Houser attended the University of Florida as an undergraduate and has been involved with the nationally renowned Smith-Walbridge Clinics for drum majors and marching bands with Director Emeritus of the Marching Illini Gary E. Smith. Houser now serves as Director and Head Clinician with Smith-Walbridge.[1]

Houser's immediate predecessor was Dr. Peter J. Griffin. He became the Assistant Director of Bands in 1994. During his tenure at Illinois, he served as Coordinator of Band Festivals and Assistant Director of the Marching Illini. Upon the resignation of Director Tom Caneva in 2006, Griffin was chosen as an interim replacement. Griffin was named as the permanent director in December 2006 and served in that position until May 2011, when he took the position of Chair of the Music Department at Elmhurst College.[2]

High school seniors planning to attend UI, transfer students, and current UI students are allowed to audition for the Marching Illini. Students must be accepted into the University before setting up an audition time. Since audition results are announced in early May, students must complete their audition by April 28th. Auditions continue through the summer for open positions only. If a student desires to audition on multiple instruments (for instance, alto and tenor saxophone) they may sign up for multiple time slots.

Some positions, such as Illinettes, Illini Drumline, Flag Corps, and drum majors, have earlier auditions. These positions are generally more competitive and may have a series of camps and auditions starting as early as January. 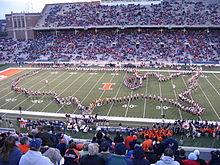 The traditional Marching Illini pregame show showcases many varieties of marching styles, and is designed to showcase the band's pride in the school, state and country. The entire show, performed 17-24 minutes before the start of every home football game, consists of seven songs and is nearly 12 minutes in length. Designed for viewing from both sides of Memorial Stadium, the east side serves as the ‘home side’ of the two-sided pregame show. This is somewhat unusual since the press box and TV cameras are on the west side. With the move of the student section and the "Block-I" to the north end of the stadium, the Marching Illini have reoriented their final set for William Tell to face north at the end of the show to play directly to the new student section.

Revised Entrance #3, the pregame opener and calling card of the Marching Illini, combines an opening fanfare with a march version of the Illinois state song.

Illinois Loyalty is the Illinois school song and was written by Thacher Howland Guild[3] specifically for the university and was first performed March 3, 1906.

Oskee Wow-Wow is used as the Illinois fight song since Illinois Loyalty is not well-suited for rousing a crowd during a game. The University is somewhat unique in this regard, as it is uncommon for a school to have a separate fight song and school song.

Hail to the Orange

The Illinois Alma Mater, Hail to the Orange is performed as part of Three in One at the end of each halftime performance. It is also sung a cappella in 4-part harmony by the Marching Illini before the band is dismissed at the end of the post-game concert following each home game. This song is based on the Sigma Alpha Epsilon fraternity song "Hail to the Purple." 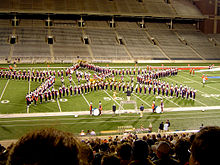 The Marching Illini at the 2004 Marching Festival

The Marching Illini was the second band to ever be awarded the prestigious Louis Sudler Intercollegiate Marching Band Trophy in 1983, after only the Michigan Marching Band. In addition to Rose Bowl appearances, the Marching Illini has performed at the All-American, Peach, Liberty, Citrus, Hall of Fame, John Hancock, Holiday, MicronPC.com, Texas, and Sugar Bowl games.

In addition to its performances, the University of Illinois Bands could claim the honor of holding the largest collection of original works and papers by John Philip Sousa, until 1994 when these items were transferred from the possession of the band to the university's archives, under the control of the University Library. These archives remain housed on the upper level of the Harding Band Building.

The Marching Illini can also lay claim to several firsts, which are listed on the band's official website. These include:[4]