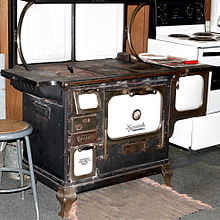 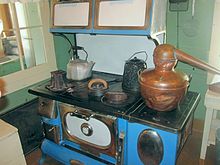 A kitchen stove, cooking stove, cookstove, or cooker is a kitchen appliance designed for the purpose of cooking food. Kitchen stoves rely on the application of direct heat for the cooking process and may also contain an oven, used for baking.

In the industrialized world, as stoves replaced open fires and braziers as a source of more efficient and reliable heating, models were developed that could also be used for cooking; these came to be known as kitchen stoves.re: cooking in the Middle Ages "The division of stoves into several compartments as in our day was seldom seen. The dishes were cooked on the fire itself. When homes began to be heated with central heating systems, there was less need for an appliance that served as both heat source and cooker and stand-alone cookers replaced them. Cooker and stove are often used interchangeably.

The fuel-burning stove is the most basic design of kitchen stove. In the developing world, such stoves are still the most common cooking appliances and new, more fuel efficient and environmentally sound biomass cook stoves are being developed for use there. Modern kitchen stoves may use alternative methods for heating food. Natural Gas and electric stoves are the most common today in western countries. Both are equally mature and safe, and the choice between the two is largely a matter of personal preference and pre-existing utility outlets: if a house has no gas supply, adding one just to be able to run a gas stove is an expensive endeavour. In particular, professional chefs often prefer gas cooktops, for they allow them to control the heat more finely and more quickly. On the other hand, some chefs often prefer electric ovens because they tend to heat food more evenly. According to EnergyGuide labels on appliances sold in the U.S. and EnerGuide labels in Canada, natural-gas-fueled appliances are more cost-efficient for the duration of their life. Today's major brands offer both gas and electric stoves, and many also offer dual-fuel stoves combining gas cooktops and electric ovens. 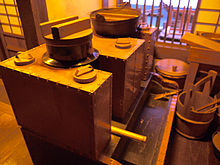 Chinese, Korean, and Japanese civilizations had discovered the principle of the closed stove much earlier than the West.[citation needed] Already from the Chinese Qin Dynasty (221 BC–206/207 BC), clay stoves that enclosed the fire completely are known, and a similar design known as kamado (かまど) appeared in the Kofun period (3rd–6th century) in Japan. These stoves were fired by wood or charcoal through a hole in the front. In both designs, pots were placed over or hung into holes at the top of the knee-high construction. Raised kamados were developed in Japan during the Edo period (1603–1867).

In Europe, prior to the 18th century, people cooked over open fires fueled by wood, which were first on the floor or on low masonry constructions. In the Middle Ages, waist-high brick-and-mortar hearths and the first chimneys appeared, so that cooks no longer had to kneel or sit to tend to foods on the fire. The fire was built on top of the construction; the cooking done mainly in cauldrons hung above the fire or placed on trivets. The heat was regulated by placing the cauldron higher or lower above the fire.[1]

Open fire has three major disadvantages that prompted inventors even in the 16th century to devise improvements: it is dangerous, it produces much smoke, and the heat efficiency is poor. Attempts were made to enclose the fire to make better use of the heat that it generated and thus reduce the wood consumption. A first step was the fire chamber: the fire was enclosed on three sides by brick-and-mortar walls and covered by an iron plate. This technique also caused a change in the kitchenware used for cooking, for it required flat-bottomed pots instead of cauldrons. Only in 1735 did the first design that completely enclosed the fire appear: the Castrol stove of the French architect François de Cuvilliés was a masonry construction with several fireholes covered by perforated iron plates. It is also known as a stew stove. Near the end of the 18th century, the design was refined by hanging the pots in holes through the top iron plate, thus improving heat efficiency even more.

Stoves continued to evolve and charcoal began to replace wood as the burning material in stoves. Up until the 1970s, the top French restaurant Le Pyramid continued to use charcoal stoves. These stoves had flat tops and the heat was concentrated on one side of the stove top so that cooks could cook things at different temperatures based on where the pot or pan was located. This was called the "piano" system. After coal was replaced with gas, French chefs continued to prefer the smooth cooking surface and so the majority of French gas ovens had flat metal surfaces over the gas burners, which continues to be known as the "french style" today.[2] 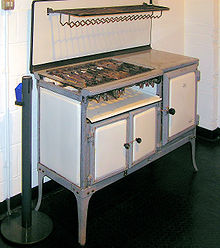 The first gas stoves were developed already in the 1820s, but these remained isolated experiments. At the Great Exhibition in London in 1851, a gas stove was shown, but only in the 1880s did this technology start to become a commercial success. The main factor in this delay was the slow growth of the gas pipe network.

Rather than applying direct heat to a cooking vessel, an induction cooker causes metal vessels to heat by electromagnetic induction. This leaves the cooking top cold (or rather, only heated by proximity to the cooking vessel) and increases efficiency.

Microwave ovens use microwave radiation to directly heat the water held inside food.

Flattop grills are also being installed into kitchen counters and islands, which do double-duty as a direct cooking surface as well as a platform for heating pots and pans.

A hot plate is a similar device, which is mobile and can be used as an appropriate technology.