The Minnesota Valley National Wildlife Refuge is a 14,000 acre (57 km2) National Wildlife Refuge in central Minnesota. There are eight refuge units strung along 34 miles (55 km) of the Minnesota River. Located just south of the city of Minneapolis, this is one of only four American national wildlife refuges in an urban area, and the largest. The visitor center is located just blocks from the Mall of America. The parklands stretch southwest through Minneapolis’ outer-ring suburbs to Jordan, Minnesota. The various refuge units are interspersed with units of the Minnesota Valley State Recreation Area. Although the national wildlife refuge is managed by the United States Fish and Wildlife Service and the state recreation area by the Minnesota Department of Natural Resources, both agencies share a consistent signage to simplify visitation.

Map of the refuge lands

This 2,400 acre (9.7 km2) unit, on the left bank of the Minnesota River in Bloomington, is the most visited in the refuge. Lakes and ponds surrounded by wetlands are bordered by floodplain forest.

11 miles (18 km) of trails lead into the valley from the visitor center and three other access points. Pedestrians and bicyclists can cross the Cedar Avenue Bridge into Fort Snelling State Park. An interpretive trail circles the man-made Bass Ponds, where the Izaak Walton League raised several fish species to stock lakes statewide from 1926 to the 1950s. Map 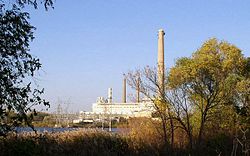 This 1,400 acre (5.7 km2) unit surrounds Black Dog Lake, on the right bank of the Minnesota River in Burnsville. The lake is named after Chief Black Dog, leader of a band of Mdewakanton Sioux who formed a permanent summer village here around 1750 and later sold game to American soldiers and settlers at Fort Snelling. The unit preserves prairie and calcareous fen. Xcel Energy’s Black Dog Power Plant rises in the center of the unit. Clean wastewater from the plant is pumped into Black Dog Lake so it may cool before reentering the Minnesota River. Because of this certain waterfowl remain on the lake longer into the winter. The unit was created in 1982 when Xcel Energy agreed to lease the lands to the Fish and Wildlife Service. The southwestern corner of the unit is managed as Black Dog Nature Preserve Scientific and Natural Area by the Minnesota DNR.

A two-mile (3 km) trail runs through wetlands south of the lake. There is parking at either end of the trail, off River Hills Dr and Cliff Rd. There is an observation platform on the north shore of the lake off Black Dog Rd. Map

The unit, located in the southwest corner of Bloomington, comprises 400 acres (1.6 km2) of marsh and floodplain forest. From a parking area there is a half-mile (800 m) trail along the riverbank and a bridge to the Wilkie Unit. Map

These 2,100 acres (8.5 km2), just south of the river in Savage and Shakopee, contain marshes, bottomland forest, and three lakes. The state’s largest great blue heron rookery, with over 600 nests, is found here. Because disturbances negatively affect the birds’ breeding, the west end of the unit is closed to the public from March 1 to August 31. Five miles of trail and abandoned farm roads are open for hiking and cross-country skiing year-round. Map

Although 2,450 acres (9.9 km2) are authorized for this unit, most of the land has not yet been acquired from private owners. There is currently no public access to this mosaic of marshes, ponds, fields, and floodplain forest. The authorized area for this unit stretches from the old Highway 169 bridge (now County Road 101) north of Shakopee and eastward along the bluffs in the southern part of Eden Prairie, Minnesota.

This 600 acre (2.4 km2) unit between Chaska and Carver was acquired in 2001. On the left bank of the Minnesota River, this unit contains a marsh-edged lake, floodplain forest, and old fields. The fields are being restored to floodplain forest. A two mile (3 km) trail runs through these habitats. There is parking at either end, at the Chaska Ballpark and Riverside Park in Carver. Map

The centerpiece of this 2,600 acre (11 km2) unit is the marsh called Louisville Swamp. FWS staff estimate that Louisville Swamp floods three out of every five years, and trail closures are common. A water control structure helps regulate the outflow into Sand Creek, a short course which flows into the Minnesota River. The unit also includes dry lands above the bluffs which bear old fields, prairie, and oak savanna. The unit is located on the right bank of the river just north of Jordan, Minnesota.

There was once a Wahpeton Sioux village called Inyan Ceyaka Otonwe, or Little Rapids, here. The unit’s Mazomani Trail is named after a Wahpeton chief. Jean-Baptiste Faribault built a fur trading post near the village in 1802 and lived here for seven years. The exact site of the village and trading post are lost, but the remains of two historic farmsteads are still visible. The Ehmiller Farmstead is in ruins, but at the Jabs Farm two buildings have been restored and a third stabilized. The barn was built in 1880 by Robert and Anna Riedel. Frederick Jabs bought the 379 acre (1.5 km2) farmstead in 1905 and his family lived there as subsistence farmers until 1952.

The unit has thirteen miles (19 km) of trail for hiking and cross-country skiing. The parking lot for this unit is a few dozen yards past the Minnesota Renaissance Festival parking. Traffic during the festival (weekends from mid-August through September) significantly impedes access to the Louisville Swamp unit. Map

This new and relatively undeveloped 1,480 acre (6 km2) unit is on the left bank of the river across from the Louisville Swamp Unit . Old fields are being restored to prairie and oak savanna. There is also bottomland forest and a wetland restored in 1992. Part of the unit was once a turkey farm. The FWS has constructed a new visitor center (for the proposal see: proposal). The center includes a new visitor center, an outdoor education center, and a bunkhouse for interns in this unit.

There are three miles (5 km) of trails in the unit. The two access points are on County Road 45, two miles (3 km) apart.

Early plans to create a park along the Minnesota River were forestalled by World War II. It wasn’t until the early 1970s that the threat of development inspired concerted efforts to preserve the valley. An act creating the national wildlife refuge was passed in 1976.

Long Meadow Lake is spanned by a wood and steel bridge built in 1920. Known as the Old Cedar Avenue Bridge, it was turned over to the city of Bloomington in 1979 when the Minnesota Department of Transportation constructed a new bridge nearby. In poor repair, the old bridge was closed to vehicle traffic in 1993 but remained a crucial link for pedestrians and cyclists until officials closed the bridge entirely in 2002. The refuge managers, Bloomington and Eagan officials, and public interest groups have all expressed a desire to replace the unsafe bridge, but funds have not been yet been secured to remove the old bridge, much less build a new one.

In the late 1990s the Minneapolis-Saint Paul International Airport planned a new runway which would route air traffic over parts of the refuge. A real estate appraisal firm arbitrated a settlement to compensate the refuge for the environmental impact of the noise pollution. The airport’s commission voted unanimously to accept the settlement in 1998 and ultimately paid $26 million into a trust. Some of that money was used in 2004 and 2005 to purchase 420 acres (1.7 km2) between the Chaska and Rapids Lake Units.