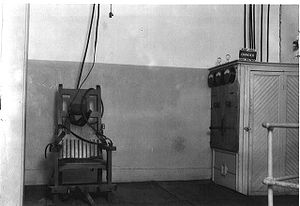 "Old Sparky" is sometimes used to refer to electric chairs in general, and not one of a specific state.

Connecticut legislated lethal injection as its sole method of execution in 1995.[3] The last person executed by electrocution was Joseph "Mad Dog" Taborsky in May, 1960.[4] Connecticut's "Old Sparky" has not been tested since it was moved from Wethersfield to the Northern Correctional Institution in Somers in 1962, and prison officials claim the prison's electrical system cannot handle it.[5]

It was the sole means of execution in Florida from 1924 until 2000, when the Florida legislature, under pressure from the U.S. Supreme Court, signed lethal injection into law. Although no one has been executed in this manner since 1999, prisoners awaiting execution on Florida's death row may still be electrocuted at their request. It is currently located in Florida State Prison on the outskirts of Starke. It was notorious for frequent malfunctions in the 1990s, namely in the cases of Jesse Tafero (executed May 4, 1990), Pedro Medina (executed March 25, 1997) and Allen Lee Davis (executed July 8, 1999). Reportedly, six-inch flames shot out of Tafero's head and 12-inch flames shot out of Medina's head, raising the question whether use of the electric chair was cruel and unusual punishment. After the Medina execution, Florida Attorney General Bob Butterworth commented, "People who wish to commit murder, they'd better not do it in the state of Florida because we may have a problem with the electric chair."[6]

The malfunctions probably were due to practices of the prison staff and not because of the electric chair itself. The wooden chair had been replaced in early-1999 to accommodate Davis' girth. The electrical components remained the same for the system.

To assure proper contact between the inmate's head and the electrode, a saline-soaked sponge stuffed between the two was necessary. In the Tafero incident, a natural sponge was replaced with a synthetic sponge that caught fire during the execution. In the Medina incident, prison officials apparently did not properly soak the sponge in saline and it caught fire as well. Photographs that surfaced after Davis' execution clearly showed that his nose had been severely compressed by a misfitted head strap.

The 1999 execution of Allen Lee Davis incited outrage after witnesses saw his white shirt rapidly turn red with blood during his execution. Prison officials later determined the blood came from an unusually profuse nosebleed most likely caused by an improperly fitted head strap. The source of the blood was not evident to witnesses during execution, because Davis' head was covered with a traditional hood. A prison inspector general took photographs of Davis's body, still bloody and strapped in the chair, shortly after execution. These photographs later became key evidence in several cases mounting yet another challenge to the constitutionality of Old Sparky. These lawsuits ultimately came to the Florida Supreme Court in the fall of 1999, when a bare majority (4 of the 7 Justices) found that the electric chair was constitutional in a case brought by death row inmate Thomas Provenzano. One of the dissenting Justices, Leander J. Shaw, Jr., took the extraordinary step of attaching to his opinion three color photographs of Davis's bloody body strapped in the chair. This publication marked the first time those photographs had surfaced on the Internet or, for that matter, anywhere outside of court and prison files.

The effect was to create an immediate and sometimes macabre international debate over capital punishment in general and Florida's adherence to electrocution in particular. The Florida Supreme Court's web servers repeatedly crashed under the demand for access to the photographs, reputed to be the first actual photographs of an American state execution in decades. The photos were used during a protest demonstration in Madrid in support of a Spaniard on Florida's death row. Some death penalty supporters in the United States viewed the photographs as a deterrent, apparently believing they had been posted on the Website as a warning to all potentially dangerous criminals.

Some Florida politicians vowed never to eliminate the electric chair despite the debate, but events rapidly changed after the U.S. Supreme Court agreed to hear an appeal from the Florida Supreme Court's split decision upholding electrocution. This action stunned some in Florida's leadership. The nation's high court had declined to review appeals after the prior two malfunctions, so observers concluded that the nation's high court now had come to view Florida's death penalty problems more dimly. Partly on the advice of Attorney General Butterworth, Florida's Governor Jeb Bush summoned the legislature into special session and in early 2000 it quickly approved lethal injection as the means of execution that must be used unless the inmate requests electrocution. The Attorney General then notified the Federal court and it agreed to dismiss the case based on the change in law.

Georgia's electric chair, known as "Old Sparky", located at Reidsville State Prison was installed in 1924 following the state's abolition of hanging and was the sole method of execution in Georgia until October 25, 2001. The original chair, which was painted white, was replaced in 1980 and sent from the Georgia Diagnostic and Classification Center back to Reidsville, while a squat, varnished replacement was constructed to replace it. Between 1924 to 1998, Georgia electrocuted 441 prisoners. Today the original chair is on public display at the Reidsville State Prison, while its replacement is situated in a closet near the death chamber at the Georgia Diagnostic and Classification Center.[7] It was famously used in the 1945 execution of Lena Baker.[8] In 1996, Georgia State Representative Doug Teper unsuccessfully sponsored a bill to replace the state's electric chair with a guillotine in order to facilitate the use of the condemned prisoners' remains in organ donation.[9]

Kentucky's electric chair which would be known as "Old Sparky" is located at the Kentucky State Penitentiary in Eddyville, Kentucky. It was first used on July 8, 1911; the first inmate to die in the chair was James Buckner, convicted of killing a police officer several weeks earlier.[10] On July 13, 1928, Kentucky set a record by electrocuting eight men in its chair, each immediately after the other, more than any other state has electrocuted in a single day. The state has decommissioned the electric chair except for those whose capital crimes were committed prior to March 31, 1998 and choose death by electrocution rather than death by lethal injection. Prior to this legislated date, 163 deaths had occurred in Kentucky's electric chair. The last such execution by electric chair occurred on July 1, 1997, when convicted murderer Harold McQueen was executed in it. 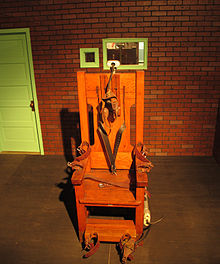 The Texas electric chair to which the name "Old Sparky" is applied was in use from 1924 to 1964. During that time, it saw the deaths of 361 prisoners sentenced to die by judicial electrocution. It was built by incarcerated craftsmen in 1924.[11] Following its decommissioning, it was originally relegated to a prison dump before being rescued. Today, it is on public display as part of a replica death chamber at the Texas Prison Museum in Huntsville, Texas [12] along with tubing and straps used in Texas' first execution by lethal injection.[13]

The now-decommissioned electric chair known as "Old Sparky" at the now-closed West Virginia State Penitentiary in Moundsville, West Virginia was installed in a facility originally used for hanging. It was in use from 1951 until 1959, during which time nine condemned prisoners were executed in the chair. The chair was bolted to a low platform which covered what had previously been the trapdoor of the gallows used in the state's judicial hangings. Its control apparatus was designed in such a way that three push-button switches were to be simultaneously pressed by three members of the execution team; only one of these switches actually completed the circuit, allowing each member of the execution team to reassure himself that perhaps he had not been the one who had actually initiated the death of the condemned.[1]