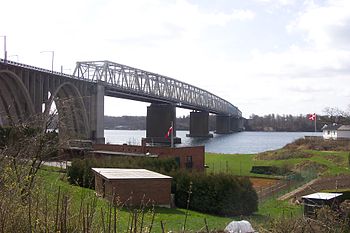 The bridge seen from Snoghøj

The Little Belt Bridge (Gamle Lillebæltsbro), also known as The Old Little Belt Bridge, is a truss bridge over the Little Belt strait in Denmark. The first bridge to have been constructed over the strait, it spans from Snoghøj on Jutland to Kongebrogaarden on Funen. It is owned by the state and Banedanmark, the Danish railway authority, is responsible for its maintenance. The bridge was the first step in linking the three parts of Denmark by road, with the second step completed with the Great Belt Bridge in June 1998; previously, only boats and later ferries had been used to transport people over the belts.

Construction of the bridge began in 1929 and it was opened for traffic on 14 May 1935. It is 1,178 metres long, 20.5 metres wide and 33 metres high, with a main span of 220 metres. On the bridge there are two railway tracks, two narrow lanes for cars to cross as well as a sidewalk for pedestrians.

When the new Little Belt Bridge came into use in 1970, the bridge lost its function as the main traffic line for cars between Funen and Jutland; however, it is still used as the only railway bridge between Jutland and Funen and thus the only railway line connecting Jutland with Zealand as well, as well as to carry traffic between Fredericia and Middelfart and their neighbouring villages.

No mass machinery was used in the construction of the bridge at the time. The bases of the piles were lowered into the sea from boats according to precise calculations, and molds both for the piles and each end of the bridge were first constructed of wood and later manually filled with cement from buckets. 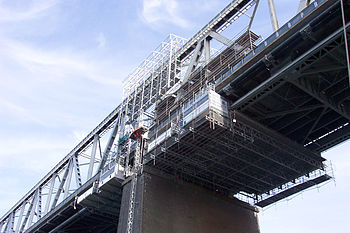 A mobile maintenance scaffold attached to the bridge

The bridge requires constant maintenance. During the first decades after its construction, a group of workers would begin painting the entire steel structure from one end, proceed to the other and begin all over again once that was finished.

Five to thirteen people work on the bridge at all times.