A round galvanized steel duct connecting to a typical diffuser 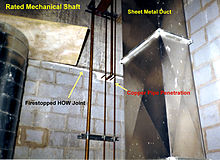 Fire-resistance rated mechanical shaft with HVAC sheet metal ducting and copper piping, as well as "HOW" (Head-Of-Wall) joint between top of concrete block wall and underside of concrete slab, firestopped with ceramic fibre-based firestop caulking on top of rockwool.

Ducts are used in heating, ventilation, and air conditioning (HVAC) to deliver and remove air. These needed airflows include, for example, supply air, return air, and exhaust air.[1] Ducts also deliver, most commonly as part of the supply air, ventilation air. As such, air ducts are one method of ensuring acceptable indoor air quality as well as thermal comfort.

Ducts can be made out of the following materials:

Galvanized mild steel is the standard and most common material used in fabricating ductwork.

Traditionally, air ductwork is made of sheet metal which is installed first and then lagged with insulation as a secondary operation. Ductwork manufactured from rigid insulation panels does not need any further insulation and is installed in a single fix. Light weight and installation speed are among the features of preinsulated aluminium ductwork, also custom or special shapes of ducts can be easily fabricated in the shop or on site.

The ductwork construction starts with the tracing of the duct outline onto the aluminium preinsulated panel, then the parts are typically cut at 45 degree, bent if required to obtain the different fittings (i.e. elbows, tapers) and finally assembled with glue. Aluminium tape is applied to all seams where the external surface of the aluminium foil has been cut. A variety of flanges are available to suit various installation requirements. All internal joints are sealed with sealant.

A rigid phenolic insulation ductwork system is available and complies with the UL 181 standard for class 1 air ductwork.

Fiberglass duct board panels provide built-in thermal insulation and the interior surface absorbs sound, helping to provide quiet operation of the HVAC system. The duct board is formed by sliding a specially-designed knife along the board using a straightedge as a guide; the knife automatically trims out a "valley" with 45° sides; the valley does not quite penetrate the entire depth of the duct board, providing a thin section that acts as a hinge. The duct board can then be folded along the valleys to produce 90° folds, making the rectangular duct shape in the fabricator's desired size. The duct is then closed with staples and special aluminum or similar 'metal-backed' tape. Commonly available duct tape should not be used on air ducts, metal, fiberglass, or otherwise, that are intended for long-term use; the adhesive on so called 'duct tape' dries and releases with time.

Flexible ducts, known as flex, have a variety of configurations, but for HVAC applications, they are typically flexible plastic over a metal wire coil to make round, flexible duct. In the United States, the insulation is usually glass wool, but other markets such as Australia, use both polyester fibre and glass wool for thermal insulation. A protective layer surrounds the insulation, and is usually composed of polyethylene or metalised PET. Flexible duct is very convenient for attaching supply air outlets to the rigid ductwork. However, the pressure loss through flex is higher than for most other types of ducts. As such, designers and installers attempt to keep their installed lengths (runs) short, e.g., less than 15 feet or so, and to minimize turns. Kinks in flex must be avoided. Some flexible duct markets prefer to avoid using flexible duct on the return air portions of HVAC systems, however flexible duct can tolerate moderate negative pressures - the UL181 test requires a negative pressure of 200 Pa.[3]

Fabric ducting, also known as air socks, duct socks or textile ducts, are designed for even air distribution throughout the entire length. Usually made of special polyester material, fabric ducts can provide air to a space more effectively than a conventional exposed duct system.

Fabric duct is a misnomer as "fabric duct" is actually an "air distribution device" and is not intended as a conduit (duct) for conditioned air. However, as it often replaces hard or metal ductwork it is easy to perceive it simply as duct. Fabric air dispersion systems, is the more definitive name. As they may be manufactured with venting or orifices for even air distribution along any length of the system, they commonly will provide a more even distribution and blending of the conditioned air in a given space. As "fabric duct" is used for air distribution, textile ducts are not rated for nor should they be used in ceilings or concealed attic spaces. Applications for fabric duct in raise floor applications; however, are available. Depending on the manufacturer, "fabric duct" is available in standard and custom colours with options for silk screening or other forms of appliques.

"Fabric duct", depending on the manufacturer, may be available in air permeable(porous) or non-porous fabric. As a benchmark, a designer may make the determination of which fabric is more applicable by asking the question if the application would require insulated metal duct? If metal duct would be insulated in a given application or installation, air permeable fabric would be recommended as it will not commonly create condensation on its surface and can therefore be used where air is to be supplied below the dew point. Again; depending on the material and manufacturer, material that eliminates moisture may also be healthier and may also be provided with an active anti-microbial agent to inhibit bacteria growth. Porous material also tends to require less maintenance as it repels dust and other airborne contaminants.

Besides the ducts themselves, complete ducting systems contain many other components.

Downstream of the air handler, the supply air trunk duct will commonly fork, providing air to many individual air outlets such as diffusers, grilles, and registers. When the system is designed with a main duct branching into many subsidiary branch ducts, fittings called take-offs allow a small portion of the flow in the main duct to be diverted into each branch duct. Take-offs may be fitted into round or rectangular openings cut into the wall of the main duct. The take-off commonly has many small metal tabs that are then bent to retain the take-off on the main duct; round versions are called spin-in fittings. Other take-off designs use a snap-in attachment method, sometimes coupled with an adhesive foam gasket to provide improved sealing. The outlet of the take-off then connects to the rectangular, oval, or round branch duct.

Ducts, especially in homes, must often allow air to travel vertically within relatively thin walls. These vertical ducts are called stacks and are formed with either very wide and relatively thin rectangular sections or oval sections. At the bottom of the stack, a stack boot provides a transition from an ordinary large round or rectangular duct to the thin wall-mounted duct. At the top, a stack head can provide a transition back to ordinary ducting while a register head allows the transition to a wall-mounted air register.

Ducting systems must often provide a method of adjusting the volume of air flow to various parts of the system. VCDs (Volume Control Dampers - Not To Be confused with Smoke/Fire Dampers) provide this function. Besides the regulation provided at the registers or diffusers that spread air into individual rooms, dampers can be fitted within the ducts themselves. These dampers may be manual or automatic. Zone dampers provide automatic control in simple systems while VAVs allow control in sophisticated systems.

Smoke and Fire dampers are found in ductwork, where the duct passes through a firewall or firecurtain. Smoke dampers are automated with the use of a mechanical motor often referred to as an Actuator. A probe connected to the motor is installed in the run of duct, and detects smoke within the duct system which has been extracted from a room, or which is being supplied from the AHU (Air Handling Unit) or elsewhere within the run. Once smoke is detected within the duct, the Actuator triggers the motor release and the smoke damper will automatically close until manually re-opened.

You will also find Fire dampers in the same places as smoke dampers, depending on the application of the area after the firewall. Unlike smoke dampers, they are not triggered by any electrical system, which is perfect in the event of an electrical failure where the Smoke dampers would fail to close. A fire damper is held open by a bar crossing the corrigated screen, which will break and allow the damper to close when air in the duct is above a certain temperature. This again will then have to be manually re-opened.

Plenums are the central distribution and collection units for an HVAC system. The return plenum carries the air from several large return grills (vents) to a central air handler. The supply plenum directs air from the central unit to the rooms which the system is designed to heat or cool.

While single-zone constant air volume systems typically don't have them, other types of air distribution systems often have terminal units in the branch ducts. Usually there is one terminal unit per thermal zone. Some types of terminal units are VAV 'boxes' of either single or dual duct, fan-powered mixing boxes of either parallel or series arrangement, and induction terminal units. Terminal units may also include either, or both, a heating or cooling coil.

'Air terminals' are the supply air outlets and 'return' or 'exhaust air inlets'. For supply, diffusers are most common, but grilles, and for very small HVAC systems such as in residences, 'registers' are also used widely. Return or 'exhaust grilles' are used primarily for appearance reasons, but some also incorporate an air filter and are known as 'filter returns'.[4]

The position of the U.S. Environmental Protection Agency (EPA) is that "If no one in your household suffers from allergies or unexplained symptoms or illnesses and if, after a visual inspection of the inside of the ducts, you see no indication that your air ducts are contaminated with large deposits of dust or mold (no musty odor or visible mold growth), having your air ducts cleaned is probably unnecessary."[5]

Studies by the EPA and the Canadian Mortgage and Housing Corporation (CMHC) in the 1990s has lead CMHC to conclude that "duct cleaning will not usually change the quality of the air you breathe, nor will it significantly affect airflows or heating costs".[6]

Duct Sealing is the sealing of leaks in air ducts in order to reduce air leakage, optimize efficiency, and control entry of pollutants into the home or building. Air pressure combined with air duct leakage can lead to a loss of energy in a HVAC system and duct sealing solves issues of energy loss in the system.

Signs of leaky or poorly performing air ducts include: