It did not have a permanent home until 11 March 2001, when it was officially opened in the national capital Canberra.

The Museum profiles 50,000 years of Indigenous heritage, settlement since 1788 and key events including Federation and the Sydney 2000 Olympics. The Museum holds the world's largest collection of Aboriginal bark paintings and stone tools, the heart of champion racehorse Phar Lap and the Holden prototype No. 1 car.

The Museum also develops and travels exhibitions on subjects ranging from bushrangers to surf lifesaving. The National Museum of Australia Press publishes a wide range of books, catalogues and journals. The Museum's Centre for Historical Research takes a cross-disciplinary approach to history, ensuring the museum is a lively forum for ideas and debate about Australia's past, present and future.

The Museum's innovative use of new technologies has been central to its growing international reputation in outreach programming, particularly with regional communities. From 2003 to 2008, the Museum hosted Talkback Classroom, a student political forum.

In 2005 and 2006 the National Museum was named Australia's best major tourist attraction.

The Museum is located on Acton Peninsula in the suburb of Acton, next to the Australian National University. The peninsula on Lake Burley Griffin was previously the home of the Royal Canberra Hospital, which was demolished in tragic circumstances on 13 July 1997.

Aerial view of the museum on Acton Peninsula

Interior of the National Museum of Australia

Entrance to National Museum of Australia 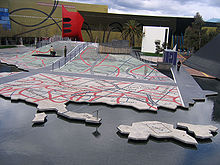 Central "garden" of the National Museum of Australia.

As designed by architect Howard Raggatt (design architect and design director for the project), the museum building is based on a theme of knotted ropes, symbolically bringing together the stories of Australians. The architects stated "We liked to think that the story of Australia was not one, but many tangled together. Not an authorized version but a puzzling confluence; not merely the resolution of difference but its wholehearted embrace."[1] The building is meant to be the centre of a knot, with trailing ropes or strips extending from the building. The most obvious of these extensions forms a large loop before becoming a walkway which extends past the neighbouring AIATSIS building ending in a large curl, as if a huge ribbon has haphazardly unrolled itself along the ground. Known as the "Uluru Axis" because it aligns with the central Australian natural landmark, the ribbon symbolically integrates the site with the Canberra city plan by Walter Burley Griffin and the spiritual heart of indigenous Australia.

The shape of the main entrance hall continues this theme: it is as though the otherwise rectangular building has been built encasing a complex knot which does not quite fit inside the building, and then the knot taken away. The entirely non-symmetrical complex is designed to not look like a museum, with startling colours and angles, unusual spaces and unpredictable projections and textures.

Though hard to precisely categorise, the building can be seen as an example of Charles Jenck's 'new paradigm'.[citation needed] Some characteristics of Deconstructivism can also be identified.

The organising concept of the scheme using the idea of a 'tangled vision' incorporates a variety of references including:

The building's architecture is thus meant to imply that the story of Australia is not one story, but many stories tangled together. The building also refers to, or quotes other buildings:[2] 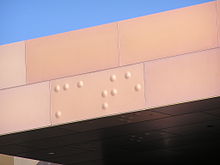 The plan of the National Museum of Australia incorporates an exact copy of the lightning-flash zigzag that Libeskind created for the Berlin Museum by breaking a star of David. The Bulletin magazine first publicly raised allegations of plagiarism in June 2000. Libeskind was reported to be angry with the copying. Raggatt's defence against plagiarism was that the design was a quotation rather than a copy.[3] The director of the museum, Dawn Casey, claimed in the press that she and her council were not aware of this symbolism when they approved the plan.[4]

The exterior of the building is covered in anodised aluminium panels. Many of the panels include words written in braille and other decorative devices. Among the messages are "mate" and "she'll be right". Also included were such controversial words and phrases as "sorry" and "forgive us our genocide". These more controversial messages have been obscured with silver discs being attached to the surface making the braille illegible.[5]

Among the phrases in braille are the words "Resurrection city". The phrase may refer to the clearing of the former Canberra Hospital to make way for the museum or it could be a reference to reconciliation between Indigenous Australians and European settlers. The phrase is used as a label in tiles on another of Raggett's buildings, the Storey Hall in Melbourne. Raggett says of that message: " I guess that tries to be some big sort of theme for this building as well and its sort of set of memories."[6]

A severe thunderstorm hit Canberra on the afternoon of 29 December 2006 and caused roof damage to the administration section of the Museum. The ceiling collapsed under the weight of hail. The damage exposed power cables and left two centimetres of water on the floor. The water also damaged several paintings by a Sydney artist which were associated with an exhibition about Australian lifesavers. However, the main part of the building was unaffected and nothing from the Museum's collection was damaged. The building was re-opened to the public a day later. The damage was expected to cost at least A$500,000 to repair.